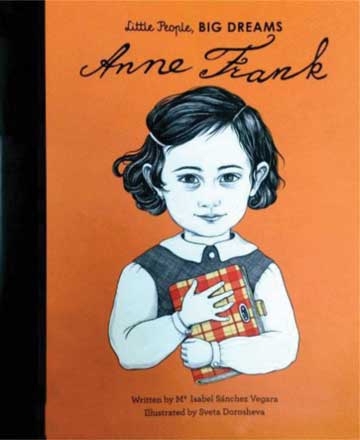 I chanced upon a biographical picture book titled ‘Anne Frank’ from ‘Little people, BIG DREAMS’ series published by Frances Lincoln at a bookshop in an airport. My ten-year-old daughter was doing a project in school on Germany and I wanted her to know about Germany’s history, especially World War II where that dark period could be understood in some real way, by making a connection with sensitivity, without overwhelming her with information and long text. This book served as a bridge for my daughter in bringing Anne Frank alive.

The illustrations bring the mood and imagery of the book alive. Be it a picture with 26 children including Anne who have a star on their dress to identify them as Jews, or a picture of her iconic bright smile and large expressive eyes, or a peak into the annexe where two years in hiding were spent, the illustrations draw you into the story and invite you to revisit the images, textures and bold lines. The illustration of the train in which Anne and her family are moved to a concentration camp, with steam from the train creating a large cloud, and the trees without any flock of birds is deeply melancholic and haunting in equal measure. In fact, birds – swans and pigeons in the image below, tell us a parallel narrative of beauty, hope, yearning for peace as well as poignancy and despondence. Birds are not part of the text but is part mood, landscape and emotions that illustrations create.

The first two illustrations do have some inconsistencies with the age mentioned in the text and what is depicted in the images, but overall, the illustrations are the highpoint. Along with illustrations, design, layout, font, cover and back cover are also powerful.

In an interview, the author, Isabel Sanchez Vegara*, who is behind the Little people BIG DREAMS series, says that Anne Frank is her most favourite in the series. She says it is “Not just because of Sveta Dorosheva’s amazing illustrations, which are works of art in themselves, but also because bringing Anne’s story to life in a way that was both comprehensible and appropriate to children was a huge challenge. War, genocide and death are tough topics for kids, and I wanted the book to be a gateway text into further discussion with parents, family or friends.” After the story, there is a spread with extra information which includes a timeline from 1929 to 1945 with photographs of Anne Frank from the time she was 3 to 13. This, along with a box listing other books on Anne Frank, her original diary, and the museum built in the Annex Amsterdam, generate a lot of curiosity. For my daughter, the timeline led to repeated remarks about Anne Frank having lived only for 16 years and a sense of sadness about her life having ended so early and so unfairly. The book could have introduced readers to short excerpts from Anne Frank’s diary to connect readers with Anne’s voice.

‘Little people, BIG DREAMS’ series includes 22 books – from Mother Teresa, Stephen Hawking, Rosa Parks to Jane Goodall as well as more unusual names like Simon De Beauvoir. The series has been well received and more books are planned. I look forward to checking out the series, while hoping for meaningful, non-preachy biographical work for young children that can strengthen Indian children’s literature in various Indian languages.

The author is an educationist who has worked in education and development sector for nearly two decades. Early literacy, children’s literature, tribal education are her areas of interest. She is currently the Zonal Head for North at Tata Trusts. She can be reached at amritapatwardhan@gmail.com.