If truth be told, the term “disappointing” would appropriately define my tryst with geography as a subject at school. I remember it as an excruciatingly boring subject that seemed to have little or no bearing on life per se. Students believed it had none of the practical applications of science nor did it teach anything of value as did history or social science. I believe most others in my class shared this feeling. I moved on to pursue my interests in biology, glad to have left the subject of geography behind. 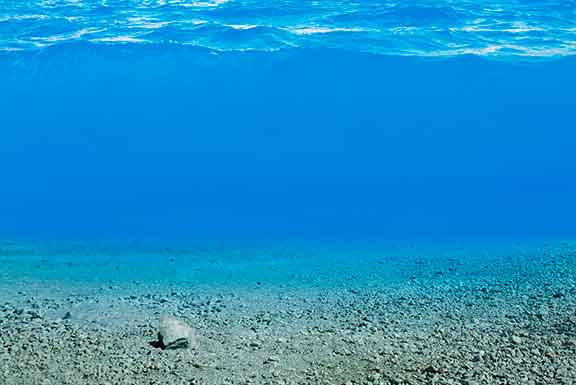 What motivated me to take up a Master’s in marine biology was the prospect of being able to study the incredible and spectacular diversity underwater, particularly the coral reef ecosystems. Physical oceanography, a module that mostly covered aspects of marine geography, seemed the least promising module at that time. But armed with just a physical map of the world, our physical oceanography teacher managed to keep us all mesmerised, changing the way we viewed our world. It was fascinating to imagine that all land on Earth, billions of years ago, was a large single mass. The idea that the large landmass broke into smaller pieces that drifted away (and still continue to do so), floating on molten magma much like icebergs would do on oceans, carrying with them numerous plants and animals, opened up a Pandora’s box of imaginations and connections. This understanding opened up so many possibilities and theories about evolution and origins of species. Now it has become apparent that climate, winds, currents, mountains, oceans, the animals and plants that live on Earth, the people, their culture, art forms, their food, their physical appearance are all tightly interlinked with each other and that geography is one subject that connects it all.Hoppeslott Midi Farm

Charles Darwin, known popularly for his evolutionary theory (one of the most revolutionary theories ever), got interested in geography after a field trip with Prof. Adam Sedgwick, who introduced and trained Darwin in geological research. This exposure to geography, geology in particular, enabled Darwin to perceive everything he saw around him, including the animals and plants, in a new light. He began looking for clues to answer his questions on evolution of life by looking not just at the various intriguing life forms around, but also at the rocks and fossils. Darwin started discerning clear patterns and found irrefutable proofs of evolution, not just of life on Earth but the Earth itself. Another outcome of integrating a geographical perspective to his work is his phenomenal contributions on the origins of coral reefs and islands in general. With insightful deductions based on detailed and minute observations (of rocks, fossils, corals and other life forms), Darwin seamlessly threaded the disciplines of biology and geography together, in the process developing a path-breaking theory on the origins of coral reefs and islands.

It is only recently that humans have been able to explore the oceans of the world and our understanding of these ecosystems is still rudimentary at best. We now know that below the vast expanse of blue, the ocean floor is as complex and fascinating if not more, than land. Various tectonic activities spanning millions of years have shaped our seafloor to produce many submarine mountain ranges and trenches. In areas where the plates converge one plate gets submerged below the other (the denser plate submerging below the lighter plate) forming a deep depression called a trench. The Challenger Deep, a valley within the Mariana Trench is nearly 11,000 metres deep, two kilometres deeper than the height of Mount Everest (8,848 metres high). Regions where such trenches form are also generally prone to strong earthquakes and volcanic activity.

In an opposite scenario, when plates move away from each other, a process generally referred to as sea floor spreading happens, where the molten magma from the Earth’s centre gushes out through the fissures created and subsequently cools down forming long mountain ranges under the sea. Such submarine ridges sometimes rise above the surface forming islands. The islands of Hawaii and many other oceanic islands are known to have formed in such a way.

In brief, an understanding of the geography of our oceans, and more importantly the processes that lead to their creation probably holds the key to deciphering the Earth’s evolution as well as the origins of life on Earth.

The awe that these underwater structures create can only be surpassed by the incredible creatures that live in such deep waters. Crushing pressure, cold waters, pitch darkness and little food are just a few of the challenges that these creatures in the deep have to face. In comparison, their shallow water counterparts are luckier. Living close to the shallows of continents, they enjoy sunlight and warmth, get sufficient food and propagate and grow faster. Nutrients brought in from land through rivers and cold water currents from the deep along with the ample sunlight makes the waters near continents extremely productive. In the sea, trees, shrubs and grasses are replaced by fast growing microscopic plants (phytoplankton), that feed a myriad of smaller animals (called zooplankton), which in turn feed numerous smaller fishes and so on and so forth. The pelagic sharks are the topmost predators of the sea, feeding on smaller fishes and other mammals. These diverse shallow water creatures are exploited by humans for food. 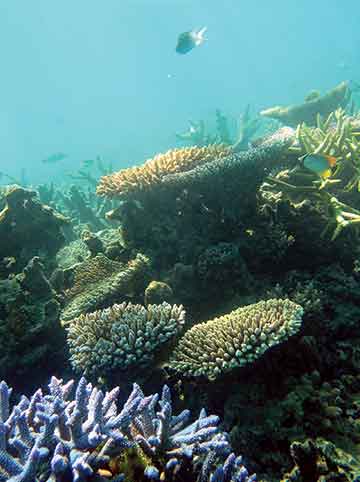 We humans, over centuries, have devised various ways to actively hunt and extract life from the oceans for food. Fishing and related practices support a large number of people, particularly in the developing tropical countries of the world. About four million people in India depend on fisheries for livelihood! The number of people that the coastal waters support directly and indirectly at a global level is mind boggling. However, increasing pressures of exploitation has lead to clear declines of life in our oceans. The destructive and highly unregulated fishing practices that we developed have rendered many of our oceans unproductive.

Oceans do not just feed humans, but they provide many more valuable services that are often not acknowledged. For instance, life on land could not be possible if not for the oceans. Covering more than 70 per cent of the Earth’s surface and ever dynamic, the oceans play a major role in controlling the climate on Earth. Be it the water cycle where water leaves the ocean as vapour and rejoins it as a river or the surface or deepwater currents, the ocean waters are always on the move. Driven by the wind, surface currents move in a clockwise direction in the northern hemisphere and counter clockwise direction in the southern hemisphere. These surface currents carry energy in the form of heat from the equator to the poles and carry cold waters from the poles to the equators. These currents determine the climate of most coastal countries of the world. When winds slacken during the El-Nino years, the currents slacken too, changing the climate along the coasts of the world.

Our seafaring ancestors as early as the 2nd millennia BC had good knowledge of such surface currents and winds that they used this to their advantage to engage in maritime trade. The Arabian Sea has been one of the most navigated seas popularly used for trading in spice.

The five major oceans of the world — the Pacific, Indian Ocean, Atlantic, Arctic, and Southern — thus are important for the survival and well-being of humankind in more than one way.

Now that I look back on my school days, I feel that I missed out on an opportunity to get a head start in a subject that probably is more applied than the “sciences” and provides more valuable insights about Earth and its inhabitants than history or social sciences. Truly, geography is a “description of the earth”.

The fundamental concepts of ocean geography such as tectonics, sea level fluctuations, tides, waves and ocean currents are all concepts that can be conveyed effectively using activities and teaching aids. For instance, from a world map, students could be made to cut out the various countries/continents along the coastlines and made to place them all together and see if the jigsaw puzzle fits in. Once they have assembled the continents together, it gives a good starting point to discuss the concepts of Pangea, Earth’s core and plates, convection cells and much more. After setting them together the teachers could discuss about how different the Earth would have been those days, how the entire oceans were just one large ocean. Later, the students could be asked to move the continents apart slowly, restoring them to their current locations. This provides an opportunity to discuss concepts of sea floor spreading, continental drift, plate tectonics, plate collisions, formation of islands and volcanoes. The teachers could also try and pull out a bathymetry map of the oceans of the world and it would be exciting to see just how complexly structured our ocean floors are. Using sea level models available online, teachers could also show how our landmasses have been shaped by the seas around us. There are many tools and resources available online for teachers to successfully teach these concepts.

The author, a marine biologist, currently works as a SERB Young Scientist at the Centre for Ecological Sciences, Indian Institute of Science, Bangalore. He is one of the founder trustees of Dakshin Foundation, an NGO based in Bangalore. He can be reached at naveen.namboo@gmail.com.