My teaching career that spanned four decades commenced in 1977. There were breaks in between jobs and a sabbatical followed owing to the arrival of my son. Equipped with a B.Ed. degree, I got back to teaching after a break of six years.

Though I was never starchy in the class, over the years my relation with my students became more informal and eventually they became my best friends forever. Students have always been my strength as well as my weakness! Years of teaching mathematics to students from standard VI to XII brought me close to many students. Most of them are in touch with me even today mainly through Facebook.

Many of my students have left deep impressions on me – their success stories, their way of expressing their respect and gratitude towards me, their ability to establish a comfort zone between us. I am non-judgmental and offer the kind of understanding that they sometimes do not find in their parents (one student confessed this fact recently).

While many of my students have left an impact on me, for want of space I would like to tell the readers about two students. 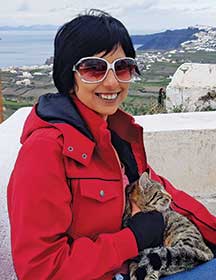 Aparna Saxena of the 1998 batch. A student of standard XI. I was not her teacher and therefore our interaction was restricted to the meetings of the Math Club, an after school program I conducted successfully for seven years.

Once I was invited to conduct math and science activities in a school in Revdanda, Ratnagiri District, Maharashtra. The activities included an evening watching planets through a telescope. I took my Math Club contingent with me and Aparna being a member of the club came along. No one would expect a student to go out of her way and extend support to a teacher who wanted to create interest in maths and that too among students from a different school. Such was the bonding between Aparna and me.

As a student, Aparna was always full of enthusiasm. She was there to support my ideas. She went to do her engineering in Wardha and always invited me to come and stay with her. Whenever she came to Mumbai she would come home to see me and our friendship continued to grow.

Aparna got busy with her MBA at Symbiosis, Pune, and then with her job in Singapore and later Jakarta. She once took the trouble of travelling by bus overnight from Singapore to Kuala Lumpur to see me when I was travelling through KL. Once when I was on a brief visit to Jakarta she visited me in the hotel and stayed for breakfast. Whenever she came home to India, she would land late in the night from Singapore or Jakarta, but the very next morning would be at my place in Vashi, Navi Mumbai. There was no dearth of common topics. We would talk for hours on end. The age difference between us would melt away.

After retirement, I had a plan to start a school and Aparna became my sounding board. Ideas would get exchanged,suggestions would be given freely and financial support would be discussed. Her faith in me was so firm that without a single question she agreed to back me, but the plan had to be abandoned due to some unavoidable reasons. I appreciate her understanding of my pain at having to let go of my dream.

Then I thought of a plan B, which was to start an after-school program for underprivileged girls in Navi Mumbai. Aparna was the first to lend a helping hand. Even before we began enrolling girls in our NGO – Shakti – An after school program, she couriered books for our library. She would order recycled plastic pouches for the girls and reusable sanitary pads for them. Above all, she donated Rs one lakh for scholarship for nearly 28 girls last year, all this sitting in Singapore or Jakarta.

A passionate supporter of women, environmental issues and causes related to children, Aparna continues to visit my centre whenever she is in Mumbai. Recently she promised to fund the future education of Simran Gupta, a potential IPS candidate from Shakti.

It is my fortune that I have a person like Aparna to fall back on and help me realize my dreams.

In 2001 I worked as a coordinator in a school in Chembur, Mumbai. Class IX was full of extremely bright, vibrant and mischievous students. They were extraordinary in many ways. The most talkative and adorable boy in the class was Aditya Govindarajan.

I reproduce below an excerpt about Aditya, whom I taught in class IX and X, from my book, What ails our schools?

Character building is as important an aspect of schooling as it is of parenting. Many students display such grace and many lack grace because of the shortcomings of parenting and/or schooling. I recall Aditya broke his leg during sports day in the month of December and was in crutches for nearly two months till the board exams. Not once did the parents come complaining to the principal to blame the school for holding sports events close to the exams. Such was their loyalty towards the school. The boy gave his farewell speech sitting on the ground with his bandaged leg stretched on the last day in school.

…the results of the board exams shocked the teachers and the principal alike because a student who normally fared exceedingly well got miserable marks in a subject pushing him to the fourth position in his class. His paper was sent for re-evaluation to the board, but we knew that by the time the actual marks would arrive it would be very late. At a function organized for the merit holders, medals were given away to the top three students of the class according to the board results. The third position in the merit list went to the head boy.

Many months later the actual marks after re-evaluation arrived. By that time the students had joined colleges. As expected, the third position was held by the student whose marks underwent the change. To our surprise and delight the head boy who was earlier awarded the prize for third position came to the school to return his medal. He graciously said that he did not deserve it and that it must be rightfully given to his classmate and dearest friend. This brought tears of joy to us. These days when students cheat to achieve their goal, here was a boy who was sure of what was just and fair. Of course, the medal, the principal told him belonged only to him.

The boy who came forward to return the prize was Aditya Govindarajan, the head boy.

Aditya worked in Microsoft for seven years before returning to India to help his father in the family business. He works to reduce pollution from power, cement and steel plants. He heads the R and D team in his company. He has no airs and remains simple and humble. He is extremely supportive of my NGO. We are equally keen on maintaining our friendship.

Both Aparna and Aditya are large-hearted, sincere, clear in their minds and given to a sense of propriety. These unique qualities will take them places.