What is the role of observation in the teaching-learning process? From a young scientist who observed the sky and questioned why it is blue to a 5-year old who observes the birds in his surroundings and identifies their call, observation plays an important role in learning. But does the teacher need to develop observation as part of her/his teaching process? In the article, this question is explored through the author’s experience of National Science day celebrations in her school.

It was the September of 1921. A young man stood on the deck of a ship lost in thought. He looked at the limitless blue sea in front of him and the vast expanse of the blue sky above. The endless stretch of blue piqued his curiosity. Why is the sky blue, he wondered? The question bothered him so much that right away he began his experiments with his pocket spectrometer. Over a period of seven years, he spent his time researching the answer. The quest for the answer led to an important discovery that won him a Nobel Prize in Physics making him the first ever Indian to win a Nobel Prize in Science. The discovery was the Raman effect and the young man was none other than Sir C.V.Raman.

To this day, we commemorate the day this discovery was made by celebrating National Science Day on February 28. On this day, schools across the country organize science exhibitions on various themes and Open Days.

This year we decided to have a science quiz at school. Ours is a little school tucked away in the Nilgiri hills. It caters to about 80 children from the adivasi communities in the vicinity. Since it is a primary school, we decided to have children of classes 4 and 5 as contestants. We thought we must make use of the fact that our students live in close communion with nature. So, we designed an audio round, where we would play audio recordings of bird calls and ask the children to identify the bird. We also planned riddles around animals and insects generally observed in the surroundings. The “Activity round” consisted of demonstrating an activity and asking what happens next. 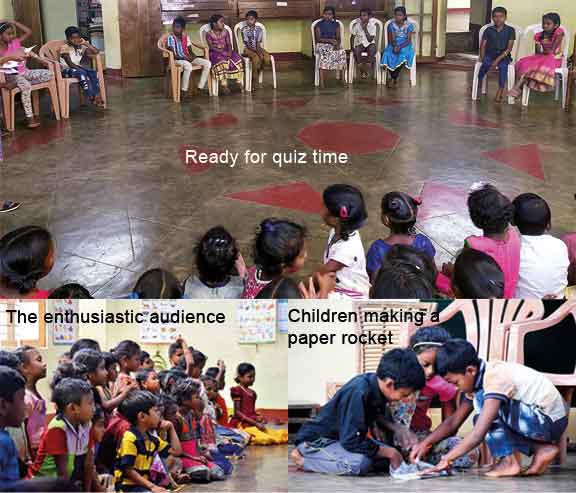 Far from being an uninterested audience, we found it rather difficult to contain the enthusiasm of the younger children. This was especially true in the ‘Bird calls’ round. Even before the audio finished playing, tiny hands shot up in the air, trying hard not to shout out the answer.

It was similar in the ‘Activity round’. The first demonstration was of a balloon filled with air placed on a candle frame, it bursts. What happens when the balloon is filled with water and then placed on the flame? Would the balloon burst or not was the question. Every child was ready with their guess and keenly observed what happened. We also had as the final component of the quiz, a ‘rocket-launching activity’. We all know how children are fond of making paper rockets. So, we put that skill to test, by asking each team to make a rocket and see which one goes farthest.

The whole exercise brought to the fore, assumptions that were deep-seated in my mind. How we often assume children are “too young” to be interested in science. If science means making sense of everyday things, then even 4-5 year olds are keen observers and have started constructing meaning of their surroundings.

John Holt, the famous educator, observes in his book, ‘Learning all the time’ that children are natural learners. He says that “children do not move from ignorance to knowledge like the turning on of a switch, but they create knowledge gradually by observing, wondering, theorizing, testing and revising their theories.”

Our work as teachers then is to observe the child to see which stage of discovery, he/she is in and aid them to move further. We need to know the child’s theory of a phenomenon before rushing in with our explanations. In one of the schools where I worked, the kindergarten teacher carried with her a notebook with every child’s name in it and a few pages dedicated for each child. She shared that over a period of 2-3 months, looking back at these notes gave her insight into the child’s learning. Replicating this may seem impractical for most teachers with large class sizes and long working hours. But what might work is, noting down what we as teachers feel are significant observations about a child during the course of a week. The observations could be the questions the child asked, something she did for a friend or elder in the school, what she chose to do during unstructured play time and so on.

As children strive to make sense of the world around them, we as teachers should strive to understand their inner world!

The author works with Vidyodaya Adivasi School, Gudalur, The Nilgiris. Formerly a researcher, she and her team now run a Resource Centre for maths and science popularization. Their experiment and activity videos are available on YouTube – bit.ly/kaathadi. She can be reached at [email protected].