“Curriculum design, development and evaluation are, always have been, and always will be special cases of political behaviours.” – J.A. Phillips and Richard Hawthorne

Politics is, more generally, the art of influencing people and more narrowly, influencing to attain and retain power and control over governance. It also encompasses the making and execution of laws and policy. It is both in the broader and the narrower sense of politics that we will see it in relation to and impact on education. We will look at this relationship through the issues of debate on curriculum, textbooks, pedagogy, and assessment – the elements of school practice.

Education is and always has been a contested terrain. It is shaped by the politics of the day. The educated Indian middle class, however, naively believes that politics, in principle, does not and in practice should not, influence school practice. This happens because politics is often considered dirty and polluting. But the reality is that politics shapes society to a large extent, both positively and negatively. For example, the democratic Constitution that we gave ourselves at the end of the freedom movement was born out of the political struggle for freedom. This struggle continued in the political struggle for the equality of all. It is the politics of equity that has shaped the granting of various rights – the rights that we take for granted today – through legal provisioning. This struggle in some senses ‘disrupted’ and still disrupts ‘normal’ life. However, participation and leadership of such struggles can also be seen as a learning opportunity in which children and teachers can engage.

School practice is an integral and perhaps one of the most important parts of education. It is guided by the philosophy and perspectives of the teacher, the curriculum and material developer, the educational administrator, and the community. Philosophies and perspectives, as they are, are formed by cultural and political thought of the times.

On another plane, education, both conserving and transformative, is political. It has a political purpose. Education of future citizens to participate in and be agents of political struggle is a political purpose as much as education to accept uncritically, cultural practices is political. The former can be considered to be forward looking and visionary, in as much as it attempts to take society to the next level of human endeavour, while the latter can be looked at as conservative. Education is guided both by educational policy at the national, state, and local levels, which, in turn, is a product of the political interaction between diverse and often conflicting forces and by practice at the classroom level. 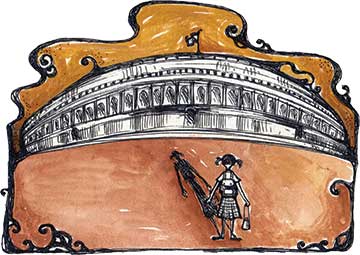 The problem is with the naïve belief that education is apolitical – it does not and should have anything to do with politics. But as we have seen, education is an integral part of politics. In fact, education is political, whether it is progressive or conserving. Hence, depending on the state of centralization of educational decision-making, of which we are a part, we can, assume larger or smaller changes in educational policy and practice. For example, if curriculum, textbooks, and assessment policies are decided at the State level, as they are in India, then a State-level political change will influence the practice of those elements which are decided at the State level. Since the passing of the RTE, continuous assessment cannot be changed, without a central amendment to the Act. If there is a closer association between the State and National level, the chances of change are greater. If however, these are decided at the school level, then State and National level changes should not have much influence on classroom practice. In addition, pedagogy or school practice has always been in the hands of the teacher if (s)he so wishes to keep it. Pressures are always put through assessment – frequency and type of assessment definitely influence pedagogical practice.

It is important, therefore, to distinguish between the influence of national and state politics on private and government schools. Government schools, as they are governed by the State government department, have no leeway in choice of objectives, textbooks, assessment, and practice – as they are prescribed and monitored by the State government department. Earlier, private schools affiliated to the State Board had to comply with State textbooks for recognition, which is not necessary today, in most States.

Given the above, one must anticipate changes and prepare to negotiate these in the light of contemporary politics, not look at them as disturbances. These struggles can also be looked at as positive spaces for learning of both teachers and students. Let us look at curriculum, textbooks, assessment, and pedagogy in the context of NCF 2005, and the current debates in the light of a new central government, in spite of the fact that education is a State subject.

In the building of the educational enterprise of the nation through NCF, for the first time, a large and fairly diverse group both from within and outside NCERT was involved in developing the curricular framework, textbooks, pedagogy guidelines and assessment frameworks. It is not as if these were the articulations of a certain kind of people thinking on the same lines. It was through fairly heated debates on languages, what should be taught, how it should be taught, perspectives on the nature of the child, and of knowledge, etc., that the framework, textbooks and assessments policy and frameworks emerged, as a middle path between, positions rationally argued out in reasonable ways. This was democratic politics in practice, and this is how it should be. But then democratic politics consumes a lot of mental and sometimes emotional energies which one expects from practitioners and philosophers of education.

At the centre of these debates were assumptions about the commitment and competence of the teacher, mostly implicit and sometimes articulated “teachers will not be able to understand this”, teachers will not be able to do this”, teachers will not put in the hard work required”. It was a struggle for the autonomy of, respect towards and faith in India’s teacher, her creativity and space. And through her, the autonomy, thinking and creativity of the Indian child. This struggle was, in some sense, won on paper in terms of curriculum documents that created space for locally developed teaching-learning materials, textbooks that gave more space to teacher-generated activity and group work and an internal but continuous assessment system. However, in practice, through centralization and repeated monitoring, this has further constrained and pressurized the teacher, particularly the government school teacher. It is because of this practical pressure that in the present political change, the issue of going back to examinations is not being seen as a giving up of that space, freedom and autonomy. 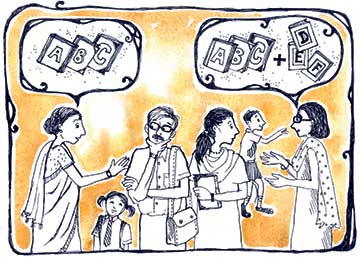 Private schools had and still have the option of taking and nurturing this opportunity through working with more child-friendly materials and assessment processes. But the cultural perception of the child not learning, if not examined in writing, prevents most teachers from having the confidence to assess the child through observing her while learning. The question is whether we see the space created on paper for the teacher as a positive space to be protected so that we can convert it to practical space or do we allow it to be given up without struggle? Would a struggle disrupt learning or offer greater opportunities for learning? Let us explore a couple of examples.

There are two aspects of classroom practice that are under debate and apprehension of change under the new political scenario – content of textbooks and student assessment and evaluation. Content of education is always under debate – there is usually a topic on families and the family context often forms the context of literature. So what kind of family do we depict? What are the gender roles reflected in the context? Does it give scope for different children to identify with the content? In an extremely hierarchical society like ours, inclusion of plurality, specially of the marginalized, always creates a tension. If we, as teachers, can in our syllabus planning, actually take some chapters from different, new and old textbooks, whether of history and the social sciences, language or science on the same theme or topic, do them with children and actually do some critical and creative exercises with those texts, we could create learning opportunities not available by just using one textbook as a textbook.

Similarly, we could as practitioners, instead of simply going back to examinations, discuss the issue in our own school teaching community or in larger teacher forums as to the actual difference, if any, that an examination would make to learning and take an appropriate decision on the basis of rational discussions.

Education can work towards transforming society or towards maintaining the status quo – it can be either transformative or conserving. It depends on what is the political philosophy of those that impact education. We, as teachers or educationists, need to understand the political philosophy of the stands we take on curriculum, pedagogy, and assessment issues, and do so with consciousness and agency. If we look at education as transformative, we can look at political change and its influence on classroom practice as opportunities for engagement in intense learning.

The author is a Senior Fellow at Eklavya, Madhya Pradesh, an educational research and teacher education organisation. She can be reached at anjali_noronha99@yahoo.com.