Republic day was just round the corner and I had gone to observe lessons of my students who were B.Ed trainees in some school. As I walked down the corridors of the school, I saw bustling groups of elated, chirpy students busy adding finishing touches to their beautiful rangoli. It was a sheer delight to see them use colours to represent their creative ideas; the deft strokes were precise, quick with a spectrum of distinctiveness and a treat to the eyes.

As I moved from class to class a particular line written on the blackboard of each classroom struck me. On one right hand corner, there was a mention of the time-table of the day with a special mention of rangoli competition for girls in the first four periods. This appeared to be a simple, regular line which was to be read without batting an eyelid. Yet the deeper dissects of its message showed how each word stood out mocking at the very foundations of gender equality – a message so simply written and being followed that day in school, without any consideration about how much weight it carried. How easy it is for us to accept this line. 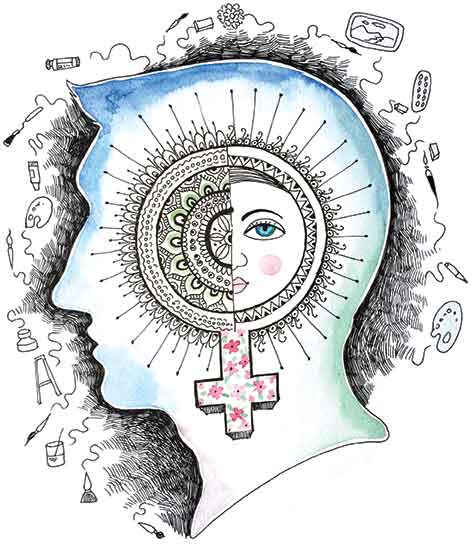 I looked around and saw the boys engaged in their own pranks in the class. Who knows how many little Picassos and maybe da Vincis and M. F.Husains were there? All were deprived of the opportunity to bring out their artistic vivid imaginations and creative streaks on the floor. A rangoli, that maybe, they yearned to make, yet oddly enough it was not for them. An invisible incomprehensible, unwritten diktat followed over the ages was coming in their way as a hindrance. Why was this amazing form of art bearing the burden of gender stereotyping? We do see many male rangoli artists and appreciate their work, then why aren’t schools taking cognizance of this and making this art open to all? Why is it that this form of art has formed close associations with docility, a characteristic of a pious virtuous female? The aesthetic appeal of this art has been replaced with the gender dominance it is recognized with.

I shuddered to think what if some little Picasso in the school wanted to try his hand at rangoli and join the girl band? The mockery, the ridicule, the labelling is what would come his way. It would have been too much for his little shoulders to carry. Come to think of this, how many only boys’ schools have been conducting rangoli competitions? Unheard of and not in their domain, these schools have only sports to serve the needs of the only gender in their schools. These needs however are society-defined which view school life through the lens of prescriptive separate gender roles which are to be adorned by the boys and girls. To think of including the third gender in all this is still far away. Though the third gender group has now been officially recognized and socially accepted, we are still struggling to decide in our curricular spaces what activities are meant for whom. These boundaries which we draw fit the males and females in different tiers and each tier has its own specifications. All schools do is keep reiterating and preserving these boundaries. Of course, paradigm shifts have happened and we have now increased the tier of the female gender and included all the activities which were once male-dominated. But what about the little Picasso secretly wanting to just put his ideas on the floor and splash them with colours? How long will he have to wait till our school doors actually realize what gender equality is in its real essence? Our education system has been quite defensive when it comes to gender equality, yet look at the skewed and irrational basis of the whole premise. One gender is being celebrated at the cost of another without realizing that both genders are paying the price.

Republic Day means freedom. But a beautiful form of art innocently had curbed the freedom of this little Picasso. We are again making the mistake of being gendered in our curricular approach but this time it is the men who are being side-lined. I wonder why we can’t let education be modelled on the philosophy ‘Everything for everyone’. The question of then who will make the rangoli and who will be part of the cricket team will not arise. But till then, this little Picasso will have to wait and hopefully the wait will not be as long as it has been for the girls.

The author is Assistant Professor at K J Somaiya College of Education. Her areas of expertise are dialogic teaching, diversity and multicultural education, microagression in classrooms and new trends in pedagogy. She can be reached at pooja.birwatkar@somaiya.edu.