It was Sunday and I was reading an article about the ingenious sewage treatment plants in Kolkata. The article spoke about the exemplary work done by the fisherfolk of Kolkata who reused sewage water to grow paddy, fish and vegetables. It amazed me that ordinary fisherfolk did this without any help from scientific researches or guidance from experts. How would these fisherfolk have managed this? It was simply learning by doing. This got me thinking. By implementing this same approach we can make our children more skillful and ready to face life.

I remember in my school we had arranged an activity called ‘Business city’ for the primary classes with a similar intent – that they will ‘learn by doing’. The activity was organized to provide a basic understanding of the market through the exchange of money and products. Students were performing the roles of shopkeepers, vendors and consumers. This hands-on experience helped them understand what a market is and the reciprocal activities taking place there. I was not aware at all, at that time, of John Dewey’s idea of learning by doing or his philosophy of instrumentalism. 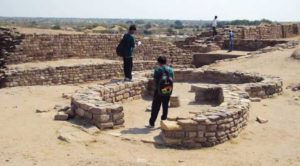 Dholavira in Kutch is famous for being the site of the ancient Harappan civilization. The social science teacher from our school had arranged a field trip for the students of class 6. After they came back from the trip, the students were asked to share their experiences in the morning assembly. All of them recounted that they learnt a lot through the field trip. They were able to compare the information in their textbook with what they saw at the site. I realized how such teaching techniques help to create interest in a subject, make their learning experiences memorable and broaden their understanding of the topic.

As an EVS teacher for class 2 I had to teach ‘Main Landforms in India’. After explaining the features of the different landforms using pictures and diagrams in the textbook, I arranged for a group activity. I took my students to a park nearby. I divided them into groups and asked them to make models of different landforms using wet sand. They were allowed to discuss and help each other. It was an overwhelming experience as a teacher to see them working enthusiastically; they appeared to want to complete their task on time and do it properly so that their teacher appreciated them. They didn’t seem to need much help from me. After that activity they were very sure of all the different landforms. Even the students who usually underperformed did very well when orally evaluated on this topic. Just to make sure, I even gave my students a written test and none of them disappointed me. 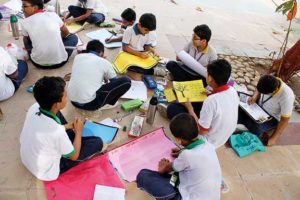 One more such class that I would like to mention here is a math class I took in the absence of the math teacher. I went to the class with some circular shapes, big and small, cut out from chart paper along with pieces of strings. All those circular shapes had a hole in the centre. I asked the students to draw a line passing through that hole so that they could divide that circular shape into two halves. Then they were asked to measure that line as well as the boundary of the circle with the help of the string, so that they could later measure the string to find out the length of the boundary. All 17 students of that class were given three circles each. They collected the data and noted it down. Then I asked them to divide the length of the boundary of each circle with the length of the line they drew. They were all amazed when they found that the results were 3.14, 15, 18 approximately every time. They asked me why they were all getting the same answers. I thought this was an appropriate time to introduce the value of Pi. I told them that their answer, 3.14, is the value of Pi (constant ratio of the circumference to the diameter) and that this value will help them find the circumference without actually having to measure the circle with the string. I asked them what they thought about the value of Pi and how it might have been invented. This introductory activity before beginning the topic helped the students greatly. They became very interested in knowing the formula of the circumference and were keen to solve sums that applied the concept. When one of the students came forward to share that he could now find the diameter directly if he knew the circumference, it was an amazing observation for me. I noticed how when someone involves the students in the learning process they can rise up and reach heights that we thought were beyond them.

Similarly, to teach the measurement of the sum of the angles of an equilateral triangle the teacher can cut out triangular shapes from chart papers and let the students measure the angles with the help of a protractor and let them reach the conclusion that the sum is 180°. Such activities will surely help the students internalize concepts and make classroom teaching more interesting.

If we look around us we will find many such instances that will help us understand the importance and value of the approach of learning by doing.

The author is working as PRT in Adani Public School-Mundra. He has been in this profession since 2001. He is a practitioner of activity based learning grounded in child psychology and educational psychology. He can be reached at anwarrayma209@gmail.com.