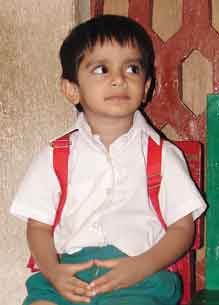 As a fledgling teacher when I first read Jerome Bruner’s famous proposition that any subject can be taught to anybody at any stage in some form that is honest, I honestly thought that this was an impossibility. Complicated subjects like laser physics, rocket science and language acquisition came to my mind and I told myself, “some things cannot be taught to a child”. “How can everything be taught to a child?” But this notion of honest teaching has stayed with me to ‘bug’ me over the years. I then wondered whether ‘subject’ ought to have been interpreted differently by me; was it a ‘subject’ like physics, chemistry, linguistics, that Bruner had in mind, or could it have been something else, even a ‘topic’ an idea, a notion. Worrying over this for the past few years, an old memory surfaced; it deals with a story told to a child, my nephew.

Many years ago, my father had brought home a beautiful carving of the Bhagavad Gita, the one that many of us are familiar with, where Arjuna has his hand on his head, bow thrown down, with Krishna in the charioteer’s seat.

My nephew, (who is now more than 25 years old) was then a two and a half year-old child who asked me, very innocently, “idhu ennadu”. Each of my three sisters, who were also there, looked at each other and at me, helpless. The looks spoke volumes, “How does one tell a three year-old the whole story of the Gita and in a manner in which he will understand? Help!”

Well, someone had to try, so I did, and here is what I would describe as my version of an honest tale. (the tale was narrated in Tamil; I am only providing a trans-creation). 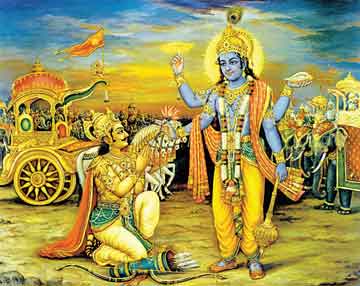 I told him that Arjuna had four brothers and many, many cousins; that his uncles and cousins had taken away things and food that belonged to him and his brothers; he wanted to take them back but did not think it right to ‘quarrel or fight’ with his own relatives, particularly, older people like uncles who had taught him many things. He was worrying over this and did not know what to do, when Lord Krishna told him that when someone does something wrong, even if they are older than us, we can tell them that; if needed, we can also go and hit them and take back what is ours. So when Arjuna heard this, he went and hit his uncles and cousins hard, brought back what they had taken away and ran back to his brothers.

To this day, I will never forget the look of gratitude my sisters gave me, for having ‘explained’ the story of the Gita in a ‘simple’ manner, but what for me, was a version that captured the essence of the tale. I had not begun by asking myself: what should I retain and what should I leave out. I had had only 3-5 minutes time then, after all, between the ‘idhu enna’ and the telling of the tale to decide what to do. Whatever I had done, seemed to have worked, for my nephew, went away satisfied. More importantly, three other adults were equally comfortable with that version of the tale.

I too was satisfied then and did not give my ‘simplification’ or the ‘reducing its essence’ much thought.

But now with honesty, subjects, reflection, standards, all milling round in my head, I began to ask myself many questions. Some of them are:
“What made me change the tale?”
“Did I retain its essence?”
“Why did I simplify a huge war to a ‘hit and took back”
“Why did I not talk about death and revenge.” and so on.

When I reflect on that memory, I know that if I had to tell this tale again to another three year-old, I would do exactly the same. I changed and modified a huge war to a very simple ‘hit them and took back what was his’ because I did not want to introduce the notion of war, and evil, revenge and death that early into a child’s mind. At the same time, the idea of ‘conflict’ had to be captured. I genuinely believe that although the story I told bore very little resemblance to the actual story of the Mahabharata war, I had not deviated from the essence of the tale.

This is because the ‘someone’ was a very young child and the ‘something’ was too big and complex to be told in its entirety.

This for me is the essence of learner-centredness. I looked at the world from the perspective of a three year-old and told the child what he, according to me, would understand and digest.

I am not too sure, however, what I would do if I had to tell this tale to a child I do not know, to a child I am not familiar with. As a caregiver, I was able to, in one sense, ‘tune in’ to the consciousness of that child, see the world from his perspective, which to a large extent I was already familiar with, and tell the tale from that ‘lens’.

The standard therefore, for me, was comprehension and understanding from the child’s or learner’s perspective. I did simplify the story, and in a sense I did do justice to the tale, but in a different way. I did not falsify the tale, and make it a different one. It was told in an honest manner.