“For those of you travelling with 31 small children, in the event of an oxygen failure, first place the oxygen mask on your own face and then – and only then – place the mask on your child’s face.” – Roland Barth, American educationist, in a book he co-authored called Learning by Heart, 2001

This instruction by flight attendants is a perfect analogy when drawing up plans to improve the field of education. We always overlook the teacher and plan to improve everything else around her. Of late, there is much talk about using teachers to promote health and welfare education, but nobody is talking about the teacher’s health and welfare. A recent central scheme is going to designate two teachers in every government school across the country as ‘Health and Wellness Ambassadors’. Under this ‘Ayushman Bharat’ project (launched in April 2018), jointly run by the Union Health and Family Welfare and Human Resources Development ministries, these teachers will be trained to educate school kids on preventive healthcare*. For the teacher’s benefit, a National Foundation for Teacher’s Welfare was set up in 1962 by the Government of India under the Charitable Endowments Act 1890. (Funny that it falls under a charitable act when it should be a responsibly given right!) Under this foundation, a gratuitous relief is granted to teachers in case of serious accidents. A medical assistance fund ranging from Rs. 3000/- and up to a maximum of Rs. 20000/- is sanctioned to teachers and their dependents for medical treatment. Yet, the salary of many private school teachers makes this financial assistance almost negligible. Some newspaper reports claim that in many states, teachers have been found working for salaries as low as Rs. 2000/- per month. Sometimes the payment is less than that of the minimum wage prescribed by the government for unskilled labour. This equates teachers to the conditions of a bonded labourer. Many are paid less than the amount mentioned in their salary contract. Teachers are unable to raise their voice against such maltreatment for fear of being removed from their jobs. Some states seem to have realized the seriousness of the issue. In Kerala, Governor P. Sathasivam declared that the government is preparing to enact a Minimum Wages Act for teachers in private unaided schools. A lot of schools are yet to implement the 7th pay commission, as per which teachers in all schools and universities will have a hiked net salary of around 16 per cent.

In such a convoluted flight, it is important to follow the airhostess’s instruction. We need to consider and secure the health of the teachers first before asking them to secure that of the students. Not much is discussed about the working conditions and health needs of the teachers. Teaching is assumed to be one of the most secure and safe professions with minimum travel, fixed working hours, indoor-hygienic environment and little or no physical strain. But, this is not the case. The working conditions in private and government schools across different regions are not uniform. Contrary to popular beliefs teaching requires a lot of mental and physical stamina and can result in work-related illnesses.

Voice problem, speech and language disorder
In a class of 25-30 students, teachers have to use their voice extensively. It takes a lot of vocal strain to give out clear instructions and bring the class under control. This is even more problematic when teachers are required to take multiple classes at a stretch and don’t get the time to rest their voice. A continuous strain can lead to disorders like respiratory infections and laryngeal cancer. A study shows that prevalence of voice problem is more in the teaching profession as compared to other occupations. (Online Journal of Health and Allied Sciences Peer Reviewed, Open Access, Free Online Journal Published Quarterly: Mangalore, South India: ISSN 0972-5997 Volume 11, Issue 2; Apr-Jun 2012). Another study on primary teachers showed that about 17.4 per cent teachers had a voice problem. (J Voice. 2017 Jan; 31(1):117.e1-117.e10. doi: 10.1016/j. jvoice.2016.03.006. Epub 2016 Jun 27). Some of the symptoms reported are tired voice after long hours of talking, followed by soar and dry throat, neck muscle tension, problem in projecting the voice. Some of the conditional factors being the years of teaching, high background noise levels in the classroom, psychological stress while teaching, improper breath management, clenching jaw/teeth while speaking, upper respiratory tract infection and thyroid. In terms of classroom architectural factors, poor room acoustics, poor indoor air quality, poor speaking postures and lack of appropriate technical aid such as voice amplifiers can be counted as significant. Speech and Language Disorder has also been commonly observed among teachers. A person with such a disorder doesn’t remember the correct word or phrase to describe something. The accurate reason for this is yet to be found but it is hypothesized that it results from a constant need to multitask, making them mentally exhausted and unable to focus.

The classic chalk and duster problem
Teaching with chalk is one of the earliest and most economical methods. Writing and scrapping on a blackboard with a chalk releases total suspended particles besides coarse chalk dust particles. These particles suspended in the classroom are introduced into the human respiratory system and have the potential for bioaccumulation in tissues and organs leading to damage. A teacher spends about two to three hours in a classroom each day and the students spend about five hours exposed to these particles. The chemical composition of a teacher’s chalk is usually hydrous magnesium silicate containing portions of aluminium silicate or calcium carbonate. Although the main ingredients of chalk dust are believed to be non-toxic, i.e., swallowing a piece of chalk may not kill anyone, it does accumulate in the human respiratory system creating long-term health issues. Calcium sulphate or calcium carbonate has the potential to cause irritation to the eyes, skin, respiratory tract, mucous membranes and digestive tract.

Varicose veins
Teaching, among many other professions, requires the teacher to stand or sit for long hours. Different teachers have different styles of teaching but most schools do not allow the teacher to sit and teach. Sometimes the teacher ends up standing for about five hours each day. Long hours of standing is said to cause venous insufficiency or venous disease. As standing requires more energy than sitting it can cause vein weakness due to overwork. This can further manifest as long-term back pain, muscle fatigue and musculoskeletal disorder. Teachers who wear heels are more prone to such health conditions. Standing on high heels puts pressure on the legs and veins by which veins are unable to circulate the blood properly. The blood consequently pools in the veins. Such a health situation cannot be easily or immediately perceived. Early symptoms include a heavy feeling in the lower legs, muscle aches and cramps, itching around veins, ulcers or soars near the ankle and lower leg, brown pigmentation or rashes. Much of this could be avoided if the teachers are given the freedom to take regular breaks from standing throughout the day.

Back pain
Long hours of sitting and standing result in back pain, neck pain and spinal problems. The furniture in the school also plays an important role in giving them the right posture. When designing and building school infrastructure this should be kept in mind. 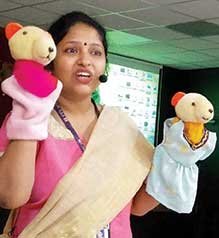 Stress issues
A teacher is on the performance front every day. They have to put up an ideal image in front of their pupils which has its own share of stress. Dealing with 30 different personalities of children at the same time and trying to live up to the energy levels of all these kids, there is a possibility that by the end of the day they are tired. Sometimes they are also required to take extra classes alongside stay backs and meetings that require them to take their work home, leaving less time with the family and friends.

Interestingly, these health hazards that teachers face are long-term problems and do not show their symptoms right away. This makes it difficult to analyze the causes of these issues and they are vaguely termed as normal. Often, it is too late by the time the issue is diagnosed. One of the first steps in addressing these issues is to accept them as problems and start discussing them with colleagues. A teacher’s job can at times be competitive and isolating, the work load may not allow enough time to socialize with other teachers. This socialization with co-workers is important to share stories and get acknowledgment. In sharing stories, teachers get to share common problems and even advocate collectively for their basic rights. It is important to have such a teachers’ union or organization in each school for discussion of relevant concerns. Trade unions are quite popular in the manufacturing sector but rarely seen in the service sector. Some of the steps that can be taken to avoid the above health hazards are – maintain a strict and apt student-teacher ratio and avoid continuous teaching classes at a stretch. Teachers can also use creative measures to replace vocal sounds with claps, whistles and other instrumental sounds to communicate. Avoid handling too many activities all at once by giving priority to the main task of teaching. It is always helpful if the teachers take a break from teaching and enrol in a study course of their interest. Such studies should be funded by the school itself as it is ultimately an asset to the school. Either dust-free chalk should be made compulsory or blackboards should be replaced with whiteboards and markers. Special attention has to be given to providing ergonomic furniture to teachers, allowing them the freedom to sit whenever they want to. I have mentioned only 10 per cent of the issues that teachers face in schools. This discussion must continue with more testimonies and participation from teachers all over. We as teachers need to take an active role in our well-being.

The author is a sociology teacher and a social science researcher based in Delhi. Harnessing multiple curiosities, her research interests examine ecology in religion, the processes of sexuality in theatre and visual anthropology. She can be reached at marygeorge433@gmail.com.