I teach grammar in school for Class III. Students have ideally had two years of exposure to grammar before they step into my class. They should have nouns and verbs in place to a very large extent so that I can go into details of kinds of nouns and tenses. In a class of 40, only 10 students know that boy is a noun and run is a verb! The others take a lucky guess. Can you suggest any activities to help me and other teachers instruct students in a fun way, so that we as teachers are not helpless, and students ‘try’ to understand?

Yes, your ordeal is by no means an exaggeration. This kind of situation has exploded in my face even when handling Class IV! Let me describe a game that I devised for Class I and II. I got the students to run around in class while doing grammar. This could also have been the primary reason for their having picked up the concepts quickly. Students normally associate grammar with unfamiliarity, writing, and an answer script with dreaded red markings! 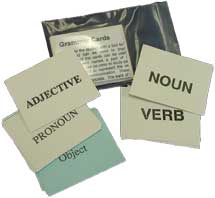 Let me tell you how I began. I went back to basic grammar, and started with nouns. I asked each student to give me an example of a noun. That was easy enough because they understand that a noun is something that you can see and in many cases, touch. I then divided nouns into proper and common nouns. Getting them to understand this took longer, because this is what a child understands:

Good analysis actually, but that is not the way grammar works. So, students have to understand that if the animal is given a name (like they do for their pet cat or pet dog), then it is a proper noun, and it begins with a capital letter. A friend is not a proper noun (but he/she is a different kind of person is the argument!) unless the friend is given a particular name like Raja, Mary, Sheela, Shyam, etc.

From the point of view of composition and correction, students lose fewer marks if they get the common and proper nouns in place. They see less red (figuratively and literally!) when they get back their test papers. Students who used to write, Today my Grandfather and Sister came with me to School (school is the name of a building!) understood that all the above nouns are common and they need not be written with a capital letter.

Let me tell you how I went about the game with my class, and you can accordingly fine-tune it for your class. I had a class of 14 students.

I made 140 cards the size of playing cards. I took a print out on an A4 size paper, cut it to size and pasted the paper on to a cardboard sheet. You could even write it out on chart paper and cut it to size.

Some other words that I included were table, chocolate, christmas, diwali, pencil, paper, monday, april, birthday (normally written Birthday by students because it is a special day!), car, etc. I did not capitalize the proper nouns, because that would have been stating the obvious!

After a thorough explanation and one or two worksheets done in class, we played a game. I divided the class into two teams, A and B. There were 7 students on each team. Here’s what I did:

Children learned much more quickly than normally because it was played more like a game. There was also physical movement. Students, who normally did not care about performance, were put under friendly pressure by the other students. They were warned ‘not to mess up’ or they would lose the game!

There was always a chorus of “Ma’am, once more!” So, why can’t we have fun with grammar?