I was relatively new to the teaching profession and had joined a reputed school in the city. I was asked to teach Indian history to middle school students.

Teaching history is no mean task. Usually considered a dull and boring subject, it requires a lot of effort to make it stimulating and interesting. How does one help children understand that our rich cultural heritage is not only relevant to us today, but that it has made a tremendous impact the world over? This is a challenge, indeed!

My colleagues told me to steer clear of the conventional method of teaching social studies. At this school, things were done differently. Now, I was nervous and began to wonder how I was going to manage. One of my senior colleagues told me that the chairperson of the school believed in the group teaching method, especially for social studies. She had been doing it very successfully since the school’s inception and insisted on teachers using the same method. 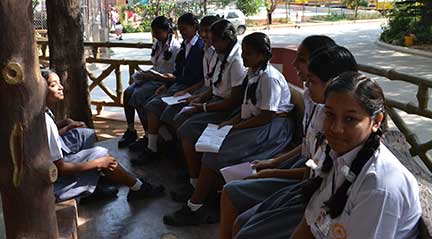 I spoke to some of the teachers about the method before going to my class. The lesson was “The Advent of the Mughals”. I hoped that the children’s interest wouldn’t dwindle and that I wouldn’t tire out from the constant pressure of keeping the lesson interesting. To my relief the students were already familiar with the teaching methodology. They had begun learning social studies by forming groups from grade VI. I gave them a brief introduction to the powerful dynasty and divided the class into four groups of nine children each. Each group was allocated a topic from the lesson.

The groups had to deal with the end of the Lodi dynasty and the invasion of Babur; Babur’s son Humayun, and Sher Shah Suri – I had two groups working on this topic because of its sheer volume. Two classes in the week were allotted for group discussions (the most difficult part of the whole method for the teacher – keeping students under control). Children in each group would discuss the major points and divide the work – making charts, models, preparing the introduction, conclusion, and content – among themselves. The sources for the presentation were textbooks, reference books either provided by the teacher or one of the students in the group, and websites (in order to save time I gave them website links they could look up.)

I was eager for the day of the presentations to arrive. The children had been coming up to me with doubts and also getting my approval for information and pictures that they had collected almost every day. I was curious to see their efforts. I had already informed them that the marking would be for “introduction, presentation, content, aids used, and conclusion.” The first group came forward with their papers and charts. The group leader stepped out to introduce her group and gave an introduction that was very appealing and then the rest of her group members engaged the other students with useful information, maps, and pictures. I had two continuous classes and I had asked all the four groups to give their presentations. To my utter surprise and pleasure I was led on a most enjoyable journey through the early modern period. It was a wonderful voyage into the beginning of the ‘two and a half centuries rule’ by a single dynasty, presented with the help of charts and pictures, models and skits, within 80 minutes.

I found the method extremely productive and one that kept the students on their toes. When one group presented, the others listened and cleared doubts. To keep their attention intact I asked the groups to give each other scores and that would add to the tally of the score I gave them. At the end, the group members quizzed the audience and I found that there were many hands raised – the students’ interest never deserting them.

After all the groups complete their presentation, a couple of days are allotted for class assignments. This is for the formal evaluation to assess the students’ understanding of the lesson.

The author is a teacher at Nasr School for Girls, Hyderabad. She can be reached at prabha0908@gmail.com.