Nutritional problems continue to be a major challenge in India, with over 40 million children under the age of three being underweight. The global strategy reports of WHO stated that malnutrition is responsible for a large proportion of deaths among children under five, and about two-thirds of the under-nutrition-related deaths are linked with inappropriate infant feeding practices in the first year of birth. Malnutrition exists at all levels, but is more prominent in rural areas, where issues of poor knowledge, poor economic status, and lack of access to information and health care compound the problem. A recent survey conducted by the National Family Health Survey found that in rural areas of Tamil Nadu, 35% of children below three are underweight, only 41% of women exclusively breastfeed their children till they are five months old, 51% of pregnant women are anaemic, and 71% of children below three years of age and 53% of women (between the ages of 15 and 49) are anemic.

Women are key to the healthy development of future generations. However, their own health and nutrition status continues to be compromised. Poor nutrition status among mothers contributes to malnutrition among children, which continues into adolescence and then again into the reproductive age. Children are mostly compromised at birth and there is little change in their nutrition status even as they grow to become adults. This is primarily due to the economic and social constraints faced by women and their families in rural areas.

Dietary choices among rural families
We have been trying to understand the dietary patterns in our villages in order to develop better strategies to improve nutritional status. We have found that there is not much difference in the practices across different age and socio-economic groups. The majority of families consume leftover rice, idli, or dosai with sambar or chutney for breakfast. Lunch consists of rice, one vegetable, and either kuzhambu (gravy of tamarind with onions) or sambar (with lentils) and dinner mostly comprises idli or dosai and is similar to breakfast. The use of beans and lentils is not very common, and they are generally cooked a maximum of three days in a week, when families can afford these vegetables and pulses. Eggs are generally consumed up to three times in a week and are, most often, given to the men and the children in the household. The most commonly used vegetables are eggplant, lady’s finger, tomatoes, onion, and potatoes. Spinach is often grown locally but not used regularly. Fish or meats are consumed only once a month, except when families have higher income and can afford to consume them more often. Milk is rarely included in the diet whereas fruits are not eaten by most families, as they are not available locally. The consumption of banana, though commonly available, is not a prevalent practice.

We have also examined, in depth, the perspective of women on nutrition, as they are often responsible for making food choices in households. We compared the views of two mothers – both with more than one child – regarding their family’s dietary practices and their perspectives on nutrition. The practices did not vary considerably from what has already been described – differences were mainly due to dissimilarities in their economic status, and in their levels of knowledge and empowerment. Malliga, a mother of three, is the sole breadwinner in her family. Her husband stays at home due to his poor health. She may be considered the head of her household, in a position to make decisions related to the family’s food and diet. She takes into consideration the value of nutrition while deciding on what to cook every day. “I think about what my children like to eat and then try different ways of cooking so that they eat all vegetables,” she says, adding that she’s been unable to get them to eat spinach no matter what she tries. Malliga also said that though they bought milk regularly, it is only given to her husband.

Devi, the other mother we spoke with, has two children. Her husband is the head of the household, but works irregularly. She works and contributes to her family’s income. Devi’s mother-in-law also lives with them, and her age, health, and preferences need to be taken into consideration. “I cook what is available and try to include nutritious foods but I am constrained by my family’s economic situation and I have to think about my mother-in-law’s needs while cooking,” she said, “and since I am dependent on my husband to purchase and provide the necessary groceries it prevents me from cooking what I would like to.”

From the mothers that we spoke with, we found that about 20% of the families give importance to their children’s nutrition, and that this is mostly dependent on the family’s income. Their food choices are driven by what is most easy and economically feasible – rice, ragi kanji, and at times, egg or fish. 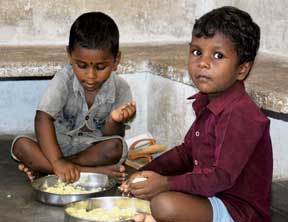 A newly married woman, Maheswari, whom we interviewed, had a different perspective. Maheswari lives with her in-laws. Her husband is mostly away due to his job and comes home only once or twice a month. While Maheswari also earns, with respect to the family’s diet she finds that she is constrained by her in-laws’ choices. “Before I got married I used to eat everything – vegetables, eggs, and meat – in my house, but now I am unable to eat what I like,” she confesses, and “The needs and preferences of her in-laws and her husband must always come before her own. “I cannot cook something simply because I’d like to, anymore,” she adds. Maheswari was pregnant, but recently lost her child due to anemia. She realizes that she needs to include more nutritious foods in her diet, and is trying her best to improve her nutrition status. She admits that she is constrained by her family situation, which is not supportive of her health and needs.

In comparison to these situations, we find that the choices of adolescent girls are more driven by their likes and tastes. Both the young girls we spoke to – one very healthy and the other, a bit weak–seemed to have the same preferences and attitude towards diet and nutrition. They were very aware of what is good for them, but preferred not to eat many vegetables or drink milk. Both young women said that their mothers were the key persons who influenced them. They also said that their mothers tried to include foods that they liked on a regular basis. However, both young women seemed to prefer fast foods. They were also in the habit of skipping meals such as breakfast and dinner, when they did not like what was being served, and often did so simply because they were not “in the mood” to eat. 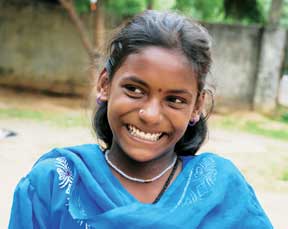 We have many ways to go to improve the nutritional status of our rural populations. The problem of nutrition is a vicious cycle, starting from early childhood and continuing into adulthood. The nutritional problems are not only due to diet, but are also strongly tied to economic and social factors. Many different strategies are required to address poor nutrition status in rural areas. We need to focus on improving the nutritional status of children, strengthen adolescent girls to prepare for their future, and support newly married couples so that they can have healthy children. Adolescent girls need to be strengthened and empowered for themselves and for their future children. Most of all, there is a need for increased awareness and sensitization of gatekeepers (husbands, mothers, in-laws) and entire village communities.

Due to inter generational effects of poor nutrition, interventions need to be holistic, spanning generations to be effective. They need to address current nutritional deficits and at the same time, strengthen future generations in order to break the vicious cycle that sustains infant and child malnutrition. Interventions are needed to address the whole range of problems – access to information, skill development, behaviour change communication, nutritional supplementation, and access to health care.

Children’s nutrition status in our villages

We have been working with rural children over the years and have collected anthropometric data for examining their nutrition status. Based on the height-and-weight data, we examined body mass index-BMI (WHO standards) of children. About 55% of girls and 52% of boys have normal BMI. Among the remaining, about 21.4% girls and 31.1% boys are underweight; about 6.2% of girls are severely or very severely underweight compared to 1.1% boys. On the other extreme, about 12.3% of both boys and girls were found to be overweight, while 4.1% of girls and 2.2% of boys were obese.

We conducted a dietary assessment among students from local villages. The results from this survey suggest that nearly 50% of students (at high school level) miss breakfast on a regular basis, while a third skip dinner. Even though 60% of students consider it important to have a healthy diet, only 44% actually act on this belief. The main source of information about nutrition for these students is their teacher and parents. The main component of meals is rice, with 54% reporting no consumption of vegetables in the last week and 40% no fish or meats in the last week. We found that students’ attentiveness and performance is directly linked to their dietary patterns. Students who missed meals more frequently also reported having poor concentration and having failed in exams.

The author is the Founder-Director of Kalanjiyam. She can be reached at kalanjiyam@gmail.com.