We were having a family get-together enjoying a delectable meal when I asked my nephew in class VIII about how he would feel wearing a uniform every day to school. I was curious to know what he thought, since his school does not require him to wear a uniform at all. He thought about it and remarked, “It would be boring to wear the same thing every day. I need variety. It feels good to be dressed differently each day”. His dad was listening to this conversation with interest. He asked him, “Why do the Chennai Super Kings or Manchester United have their uniform? Why not just let each player wear clothes of his choice to the game?” 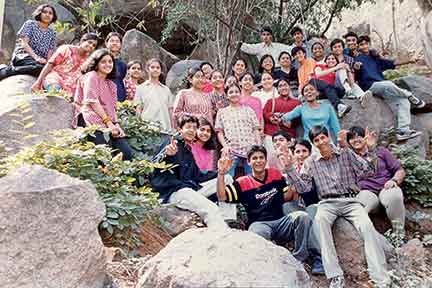 As my nephew mulled over that question for a while, his dad added, “Being uniformly clad means you are part of a team and you work as a team. I don’t think that a uniform is boring at all. On the contrary, it reminds you that you are part of something much bigger.” My other nephew, a class XII student interjected, “But why should anybody be forced to wear the uniform? The child should wear what he or she likes”. His mom smiled and said, “But the thing is, you guys may not have a uniform, but the school does insist on a dress code. The children are not allowed to wear a t-shirt that has a brand logo, advertisements, or any inappropriate phrases written on it. The shorts that the children wear need to come to the knee level and girls are asked to wear an appropriate dress to school.”

She added, “Having a dress code instead of a uniform brings with it, its own challenges. Children are often so picky about their clothes, that choosing something that they like within the dress code guideline is tricky. We end up buying clothes for school and outside wear separately, and this is a more expensive proposition for sure. Additionally, when the kids become teenagers, this process becomes even more complex, as the peer influence becomes very strong and emotions run wild!”

The children’s father recounted his own school days. He studied in a school with a generic uniform. He strongly supported having a uniform as it really made every child from all strata of society feel the same way. It eliminated the bullying and embarrassment of the child who could not afford a variety of clothes to wear to school. He said, “Look at some government schools. The students from less privileged backgrounds are given uniform clothing material at the beginning of the year that they can get stitched. This significantly eases the financial burden on the parents, and motivates them to send their children to school.”

He remarked on the escalating cost of footwear and clothes. “The different brand advertisements are geared towards children” he said, “Children get drawn to the image that the advertisement portrays. They sometimes don’t stop to think whether or not it is reasonable to buy such a thing. For the child, the image building is important.”

The children’s grandmother was listening intently. She recollected that in the pre-independent era the uniform for girls included a long skirt and blouse made of khadi, and for boys, it was khadi trousers and shirts. Wearing a sari was a must for girls in colleges and dhoti or full pants a must for the boys. She said, “If schools choose more traditional clothes as their uniforms, it could be a way to teach the children about our culture, and all the various traditional attires. If that is not functional for day-to-day wear, they should ask children to wear such traditional clothes on occasion.”

All this talk took me down memory lane, thinking about my school days. I remember wearing long skirts and blouses that were made of heavy drill, with hair in two plaits turned upwards and tied with the house colour ribbons. In high school, wearing a half-sari was strictly followed. I would secretly wish to wear the long pinafore uniforms that the convent schools had!

My friend was hunting for a good school for her son when they moved to Chennai from Delhi. She and her husband liked a particular school, but their son did not want to go there. When I asked him why, he said, “They said they don’t have a uniform, which was interesting to me. But they say boys have to wear only kurta pyjama. Also, we must only wear sandals or slippers as footwear.” This school enforced uniformity in dressing, though there were no uniforms.

At Vidyaranya, a school in Hyderabad, where I teach, we do not have a uniform, similar to the system my nephew’s school follows. We do however ensure that a strict dress code is followed. The motivation behind this system is that we give children the freedom to choose what they wear, but also give them the responsibility of dressing appropriately by specifying the guidelines they must follow while making their choice.

We often talk to the children to tell them that they can bring out their individuality through their clothes, but the expansiveness and inclusiveness in their thoughts and actions are very important. It is easy to compare one with others, judge them based on the clothes they wear, or to feel inadequate because of what one does not have. We tell them to go beyond that comparison, and to realize that every person has something unique to offer. While it is fun to express one’s uniqueness through clothes, they have to realize that there is a lot more to a person than their clothes or appearances.

It all boils down to a common theme. There needs to be a common set of guidelines that constitute what a child should wear to school. Children should be dressed comfortably and appropriately keeping the surroundings, their activities, and the weather in mind. The clothes worn should be decided keeping in mind that there will be children from varying backgrounds who come to the same class, and no one should feel like a misfit because of what they wear.

In uniform or not, children are unique and different from inside. What they feel, what they think and how they behave cannot be contained by the uniform that they wear. As teachers, we get to slowly know the strengths and weaknesses of each child in the class. What a child wears does not mask who the child is. It is fascinating to understand the uniqueness in each child, beyond how they look or what they wear.

A standard uniform is practical in some situations, and a dress code works in some others. Either way, enforcing a uniform/dress code surely has merit. It is wonderful also to realize that enforcing a dress code for children does not make their thinking uniform, their inner feelings alike or their perspectives the same. The dress code does not stand in the way of the child’s self-expression. Children should be taught to express themselves in ways other than their clothes and appearance. They should express themselves creatively as well, through arts, music, sports, and learning.

The dress code is a representation of the values we want children to inculcate: to be inclusive and not be judgmental, to look beyond appearances, to feel a sense of belonging with their peers, to work as a team, to realize that what is inside each one of us, is so much more special than the things we wear and buy!

The author currently teaches Biology and Physics at Vidyaranya High School, Hyderabad. She can be reached at [email protected].