The to-do list for the month was read out by our academic co-ordinator and we were given deadlines to turn in our project topics for grades 6-8. I lost my chain of reasoning on the subject as I was fed up of the conventional ideas. The thirst to bring about novelty in the projects led me to frantically look for ideas.

The very same day after the long break, I entered grade 7 B. If I remember right, it was the second last period. I had to teach a lesson from the English Literature text. After a long day, students were not in a state to grasp anything new. As I was aware that teaching and learning becomes hard when done unwillingly, I decided to keep it light and resorted to reading the prescribed reader, ‘Short stories by O Henry’. We were reading the story, ‘The Last Leaf’. As we neared the end, one of the students opposed the author’s decision of ending the life of Behrman, the artist. No sooner did he oppose than the other children echoed similar sentiments. The situation in the classroom became tumultuous and I had to somehow restore peace.

It is then that I realized that Gen Z is very different from Gen Y and the Millennials. They can question the author and demand an explanation for the way he/she has dealt with his creation.

In no time did a simple reading class turn into a proper group discussion where we deliberated and discussed about various stories which made the students unhappy, discontented when a character was sidelined, eliminated without reason or killed, a situation which was not dealt with properly, loose ends left behind, etc. To name a few, they questioned the killing of Prof. Dumbledore in the Harry Potter series, Jason in Percy Jackson-Heroes of Olympus, Sherlock Holmes’ instincts, the treatment meted out to Oliver and The little match girl, the purposeless running away of Huck and so on. 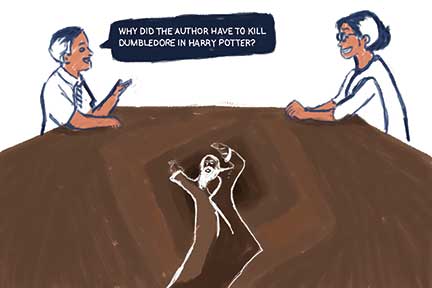 Great ideas need a landing gear as well as wings so here I was, to take this as a cue and weave a topic for my group project with due credit to my young bright minds. It was right there waiting to be boxed and presented with a tag on it. Once the class ended, without wasting a moment, I rushed to my table and typed out the project and named it ‘Hey Author’. My co-teachers were equally impressed with this idea of characters questioning the author about their fate penned by him/her. Now here is what was expected of the students:

Each group of five had to choose a novel of their choice, one person had to play the author and the rest, the characters penned by him who were either dissatisfied by the portrayal of their character or were not happy the way the story had taken its course. This required them to thoroughly read and understand the story and most importantly, the author’s purpose.

The students were elated with the idea and in no time decided upon the authors and characters they wished to portray. On the D-Day, the school corridor resembled a magical world filled with literary characters, each one perfectly cut out to play their character. They had come dressed up like those characters! They would give the real characters a run for their money! The authors looked composed and were equally geared up to tackle any situation.

Each group executed their parts exceptionally well. The students seemed to be soaked in the essence of the characters they had decided to play. The arguments were valid and necessary. Every author tried to justify his/her stance which led to a few characters being convinced and the rest, not so convinced. Nevertheless, it was a show worth watching. Learning happened without much effort, thereby helping me achieve my learning objectives. Never before had I witnessed such an engaging project.

The seventh graders who were unaware of the term ‘critical appreciation’ had unknowingly critically analyzed a literary text. This is something we expect of them in grade 9 and 10. Through this activity they acquired some idea about the written work, engaged with it at a deeper level, supported that idea with evidence from the literary text and presented the same in the form of an act.

The author is an enthusiastic middle and high school teacher who has quit the corporate world to facilitate young minds in learning. She is the head of the Department of Economics and an English teacher at Bombay Scottish School, Powai. She can be reached at nslakshmi10@gmail.com.