When I was 15-years old, I had the privilege of spending four weeks in the Caribbean at a summer sailing camp for teens. It was 1982, and windsurfing was slowly emerging from obscurity – from a few avant garde aquatic circles in California and Sweden, to the mainstream culture of water sports. (It became an official Olympic event in 1984.) Standing on the pristine beach of St. Barts, I gazed out across the bay, witnessing for the first time people on surfboards with sails attached, zipping along the ocean surface at breakneck speeds. I imagined what a thrill it must be to harness the wind and move at such a velocity, and decided right then and there that I was going to learn how to windsurf.

I must admit that my initial attempts were anything but a success. In fact, I would hardly manage to stand up and balance myself on the board before I’d tumble back into the water, scraping my elbows and knees on the way down (with the salt water adding insult to injury). However, everything changed when I met Peter Hart, a professional athlete in his early 20s – one of few people in the world who at the time could call himself a world champion of the sport. Much to my great fortune, Pete happened to have been “hanging around” the Leeward Islands preparing for an upcoming competition. And because I showed so much enthusiasm (and probably because there were so few others who shared his interest in this virtually unknown sport), he generously offered to teach me how to windsurf.

Joining Pete in the water, I expected him to demo some of the basics that I would later try to emulate. However, I was surprised when he got on his windsurfer and signaled for me to swim out and get on his board with him. I eagerly paddled out to where he was floating, climbed aboard and found a place toward the front where I could sit cross-legged and out of his way. Pete then stood up behind me and started shuffling around, gaining his balance and positioning the board in the direction he wanted. He lifted the mast of the water and got a firm grip on the boom (the handle that controls the sail). Within a few seconds, he caught the wind in the sail and we began streaming forward. We continued to gain momentum until we reached a hefty clip – a speed that seemed almost impossible without a motor. As water and wind thrashed about, I could feel Pete shifting his weight and the tilt of the mast to maneuver around waves, yachts and other surfers. He was very much in control. And I can recall feeling as if I intuitively knew what he was doing – as if I too knew how to windsurf.

It was a priceless moment, a rare lesson of my life: being taught how to windsurf directly on the board of Pete Hart, world windsurfing champion. That experience alone might have been enough. However, Pete was just getting started. “Now it’s your turn to drive,” he said as he directed me to get up and stand between him and the sail. Perplexed (though excited) by the invitation, I wobbled to my feet, and cautiously grabbed onto the boom, with Pete right behind me much like a father holding onto the back of his son’s bicycle as he learns how to ride. But despite being directed by such an able guru, my profound lack of balance caused us to capsize, dumping both of us in the water. Not once, but twice. I felt like a complete idiot. Here is this world champion, ready to reveal the secrets of windsurfing to me, and all I can do is dump him in the water. Luckily, though, Pete was a saint, and didn’t express even a hint of impatience, encouraging me to get back up on the horse and try again.

On my third attempt, however, something happened. As I gripped the boom tightly the sail began to billow and the board started to quiver. I clenched my fists and forearms and taking a clue from Pete, bent my knee and leaned back deeply countering the pull of the wind. The board instantly surged forward and we were flying again. But this time I was in control (or mostly in control!). All I can remember was this marvelous sensation of being connected – my body, the board, the wind, the water…it was as if everything in life was in sync. 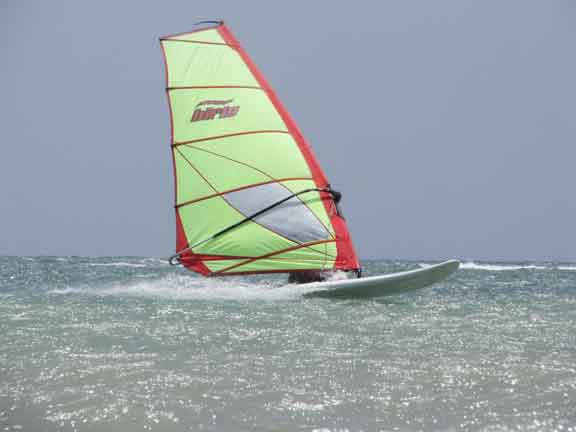 Pete was not only a true master of his craft. He was a consummate teacher. He did not just instruct me how to windsurf. Rather, he brought me into the flow of windsurfing by positioning me on the point of equilibrium, giving me a view into another dimension. He enabled me to sense what windsurfing felt like – to experience the exhilaration of being situated on the edge where challenge and ability meet. Once I had a taste of that flow state, you can be sure that I was out there practicing every day trying to get back into “the zone” on my own. By the end of the four weeks, I was an accomplished windsurfer – perhaps not ready to compete, but capable enough to push my skills to the limit and truly enjoy the sport. Had I never met Pete, I don’t know how long it would have taken for me to be able to windsurf, or even if I would have managed to learn to do it at all.

Catching on the academic flow
Years later as an educator, I find myself reflecting on my windsurfing experience. I do so as I see children struggling in their studies, helplessly drifting in open waters with little direction, unable to surf sine waves or catch the wind of William Shakespeare. Parents, in their confusion and inability to provide sufficient help, try all sorts of strategies to get their kids into academic flow. Some dangle rewards in front of them to bribe them into doing better, or frighten them with dire consequences if they fail. Others send their kids to tuition classes with the belief that additional evening sessions will enable the information to register in their brains. The superstitious turn to astrologers, who charge a healthy sum to provide gemstones or suggestions on the right times of day to study that are ‘guaranteed’ to enhance retention. And when all else fails, there is the ultimate threat of sending them to boarding school.

I believe that what most parents fail to recognize is that every domain has a flow – whether it is academic subjects like chemistry, maths, or language or an extra-curricular area such as art, music, dance, or acting. And that the concepts can easily be unlocked by those who are masters of their field. You might recall such teachers you encountered in your own life – the ones with a real passion for their subject. The ones who were so immersed in their areas that they painted 3-dimensional animated pictures with their words and body language, and who could enthuse even the most indifferent learners.

What kids need is a taste of that pleasurable feeling in the different domains they are studying – where they become immersed in the current of the experience, where there is a merging of action and awareness, where they get into the flow of reading, writing, solving problems, dancing or acting. And I believe that one of the best ways to lead children to that experience is by exposing them to individuals who are experts in those areas – who know what it means to be in flow.

Unfortunately, many teachers I have met qualify as teachers by title only. They are not masters of their subjects, nor do they show much interest in their field. They might have selected the teaching line because it was an easy job with lots of free time and holidays. And I would venture a guess that most have never actually entered into a state of flow in their domain. That being so, how can parents expect such teachers to lead their children to achieve their potential?

Find a master
A majority of the time people owe it to their kismet when they encounter an enlightened mentor who dramatically shapes their lives – be it a gifted professor, a knowledgeable neighbour, or a windsurfing wizard they run into on a Caribbean island. But listen closely, because here is your opportunity to cheat fate and to help your children get a leg up in life. My simple advice to parents is this: Do not wait for chance to randomly bring experts across your children’s paths. Make deliberate attempts to find champions and expose your kids to them. They need not be ‘champions’ in the literal, competition-winning sense, but need only be people who have mastery on their subjects. So for instance, you can find out who the best teachers are in your kids’ school and then work like mad to get them into their classes. Or you can identify friends and relatives who can spin a yarn with words or who have a fascination for physics, and request them to spare some time to share their wisdom and passion with your kids. It doesn’t matter where you find them – just find them and get them in front of your kids!

So the next time your children display signs of apathy toward their studies, remember that even a single session with a genuine guru can open doors much wider and much faster than the promise of a new video game, the warning of suspending pocket money or holing them up after school every day in a cram class that bores them to tears. For once they have savoured the taste of flow, they will hanker to sample that flavour again and again. There is no need to tempt them with chocolate to improve their maths or English scores when the sweetness is already there within the numbers and letters themselves. All they require is someone who can tickle their brain buds and turn on their natural appetite for learning.