Life, Arjun thought, was strange. The way it changed, in the blink of an eye, that was strange. Look at him – just this morning he had been getting ready for Teacher’s Day, humming happily to himself as he shaved and bathed. He had known what to expect. The specially decorated stage in the middle of the huge quadrangle was all ready. And of course, as one of the founding Gurus of the Learning Colony, Arjun had known that he would be expected to sit on the stage, had known that he would be asked to give a speech and had one all ready.

‘Communication,’ he had imagined himself saying, ‘communication and confidence. These go hand in hand and the success of our Learning Colony stands testimony to the validity of these goals!’

And in fact, he had been getting up from his chair, the first words of his speech running through his head, when the first wave of soldiers had attacked, whooping and screaming as they raced into the quadrangle. In a minute, the ordered gathering had scattered and had been turned into a mad confusion of screams and shouts and yells. And now, Arjun looked around in disgust, here he was, in the middle of the thick forest that surrounded the Learning Colony, with only the muted sounds of birds to keep him company.

And it was then that the first rustle reached Arjun. He stopped at once, and looked around, trying to see everything at once, determined not to let anyone jump on him unawares. He saw the girl easily; she was not making any attempt to hide, her blue and white uniform standing out in the midst of the trees.

‘You,’ Arjun was immediately transformed into a teacher, his voice commanding. ‘Come here!’

The girl obeyed instantly, just like any good student of the Learning Colony ought to, but it was only when she came closer that Arjun saw the sad state of her uniform. The white kurta was barely white and the blue salwar had holes and patches on it. He ignored these things; after all, he had more important issues to deal with.

‘Where are the others?’ he asked and the girl looked puzzled.

That stumped Arjun but he recovered quickly. ‘All right,’ he said. ‘Stay with me and let us find the other students,’ His tone was calm, certain, the tone of someone in charge, someone who knew things even though in this case, Arjun had no idea where the other students were or how he was going to find them and the other Gurus.

But he began to walk through the forest, confident the girl would follow. His feet stirred up the dry leaves on the ground, rustling and crinkling in the silence.

‘Huh?’ Arjun was astonished. Who was this girl and how dare she try to shush him?

‘Too much noise,’ the girl explained. ‘We don’t want the enemy to find us!’

Arjun had to admit that she was right. But that didn’t mean that he liked the way she had spoken to him, as if he were the student and she the teacher.

‘What should we do then?’ he demanded, not really expecting the girl to have an answer ready.

‘This way,’ she whispered and set off through the trees, her feet gliding on the leaves so there was barely any noise. He followed, angry but intrigued. What was she going to show him?

When they broke through the trees, he saw the river. ‘Let’s walk here,’ she said. ‘That way no one can hear us,’

This made such perfect sense that Arjun had to nod. Yes, walking through the river would muffle their footsteps and keep them safe from the enemy. But how had the girl known this?

He looked closely at the girl. She didn’t look familiar and that surprised him. He prided himself on knowing all the students in the Learning Colony. And yet this girl, with her long hair hanging in two plaits and her old and faded uniform did not look familiar. Perhaps she was a student of one of the other Gurus? Arjun frowned. If that was the case, it wouldn’t be polite to ask her about her Gurus and yet…

‘So,’ he said, speaking casually, ‘which Guru taught you that trick?’

In his mind he tried to guess her answer. All the Gurus in the Learning Colony focused on communication and confidence, but he was sure Rajan, the youngest and newest teacher, was trying innovative methods and lessons.

No Guru? Arjun was surprised. But everyone had to have a Guru.

‘Then…how did you know that we should walk by the river?’ Arjun frowned.

‘I learnt it from the animals,’ she said and her tone was so casual, and so matter of fact, that it silenced Arjun.

Arjun walked beside the girl, the sound of the rushing river loud in his ear, frowning. He should have been worrying about the soldiers attacking their Learning Colony, he should have been trying to find the other students and Gurus… and instead, here he was, trying to understand what this strange girl was telling him.

She had learnt something from the animals. Where had she seen animals? Was Rajan taking the students out of the classes to teach them things? Was that where this piece of learning had come from? 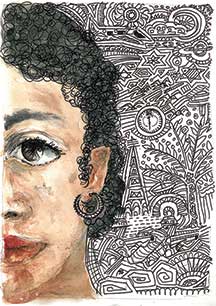 The girl stopped suddenly and turned, her face a mask of fear. ‘Hide,’ she hissed, pushing him down. Arjun went down on his knees, the sudden push sending him crashing into the tiny pebbles by the river. She dragged him behind the rocks and they crouched there, feeling the pebbles poke their knees and cut into their hands. Arjun could hear his heart thumping and wondered if the girl could hear it too. But she was busy looking around and a minute later, she tugged his kurta to say, ‘Come on!’

Arjun went with her, his questions and his doubts forgotten for the moment. The girl obviously knew what she was doing and he was not going to question her. ‘Here,’ Arjun looked at the handful of thick mud she was holding out to him.

‘On your face and arms,’ the girl said urgently. ‘Quick!’ And before Arjun knew what was happening, the thick wet mud was being slathered on his face, striping his arms and body. ‘Now we can hide in the open,’ the girl whispered. They were walking through the thinning edge of the forest now, and Arjun saw that the mud had dried and made them a part of the tree trunks and the dry leaves.

And now the questions were too strong to be held back. Now Arjun had to ask the girl, ‘Who taught you this?’

‘The soldiers of the King,’ she said and there was no pride or sorrow in her answer. She was stating a fact. But Arjun felt the weight of those words; he felt the horror of what she was telling him. And he was afraid. He backed away from her, eyes fixed on her, hands held out as if to fight her and asked, ‘The…the soldiers? Are you…are you from their camp?’

Even as he asked, he knew the answer did not matter. Anyone who was with the enemy camp would hardly declare it so easily. They would simply pretend and then, at the first opportunity, kill him. But the girl was shaking her head.

‘No?’ Arjun asked. ‘Then how did they teach you this trick?’

Arjun stared at her, confused. ‘It’s the same thing,’ he said, ‘teaching and learning.’

But the girl was shaking her head, a small smile on her face, daring to contradict him, one of the founding Gurus of the Learning Colony. ‘No,’ she said. ‘Teaching and learning are not the same. You can learn things that no one has taught you. And you can teach things that no one will ever learn!’

‘Yes,’ Arjun thought. ‘Oh, yes, she is right!’ But how could he say so? How could he accept her rightness when she was only a young girl and he one of the most famous Gurus of the new world?

‘What have you learnt?’ he asked instead.

‘And what did you learn from the Learning Colony?’ Arjun asked.

The girl did not hesitate. ‘I learnt that the world is full of teachers,’ she said. ‘And that silence helps us find these teachers!’

Arjun thought of the Learning Colony and the constant hum of voices and arguments, opinions and views that thrummed there. This girl had just destroyed everything that the Colony stood for. And he was filled with anger at the calm way in which she had done that.

‘Why did you enroll with us then?’ he demanded. ‘Why did you come all the way here, to this Learning Colony, if all you wanted was the silence to learn things?’

Her eyes widened. ‘I didn’t,’ she said. ‘I am not a student of any Learning Colony!’

‘But you just said you learnt things from my…our teachers?’ Arjun said.

‘Oh yes,’ the girl nodded. ‘But I didn’t enroll in your Learning Colony to do that! All I had to do was watch and observe, listen and learn!’

Arjun stared at the girl who had just demolished every single principle of his Learning Colony. He should have been angry but she had taught him well, even in the short time that they had known each other. He had watched and observed, he had listened and he had learnt. And he would use the knowledge, he swore to himself, he would use it to transform teaching and learning, to rebuild his Learning Colony. But first, first he had to get out of the forest and away from the enemy soldiers. And for that, he, the founding Guru of the most popular and effective Learning Colony required the help of his new teacher.

There could be no shame in asking, no limit on the learning and where it came from. And so, his voice was natural and light, ready to listen and learn when he asked, ‘Will you help me find my way back to the Learning Colony?’

And because teachers were everywhere and learning was as easy and gentle as breathing, the girl, unsurprised, smiled and said, ‘Of course! Let’s go this way!’

Nandini Nayar has written over thirty books for children of all ages. She has also worked on textbooks at the school and university level. She can be reached at nayarnandini@gmail.com.