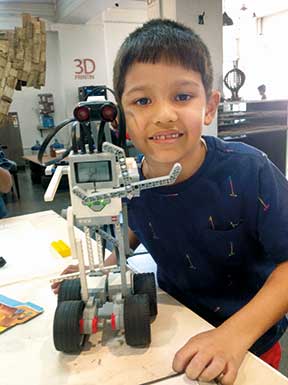 RoboticS is great way to learn science and maths with hands-on activity-based platforms. Any learning system has three essential components, the content or the subject know-how, the associated pedagogy and the skill to deliver it. First, in terms of robotics, the subject know-how is spread across science, environmental science and math curriculum. Second, the pedagogy holds centre-stage for the robotics learning experience as most of the learning outcome is of implicit nature rather than explicit. Almost all learning experience is derived from the hands-on activity and logical applications instead of given classroom knowledge to be memorized. Third, it needs a good deal of training to impart such education, as real time learning avenues are very few. At Makers Loft, the training is offered at three different levels – beginners, intermediate and advanced. At the beginner level, the learning is to understand the fundamentals of robotics such as the construction, coding of sensor-based robots and basic integration. At the intermediate level, the children learn about the task-based construction with programming that requires higher integration of logic and the advanced level is basically problem-solving or troubleshooting applying the knowledge gained during the previous two stages.

Before getting any deeper into robotics, let’s ask a simple question – what is robotics? And what is robotics education? Any machine which uses sensors as an input device, feeds the information for processing and decides the output based on the input, is a robot. Thus, the fan is a machine whereas an air conditioner with a temperature sensor is a robot. We have many simple robots around us, such as the microwave oven, the automatic washing machine, etc. Robotic education is one of the milestones of the 21st century, achieved through the integration of technology, engineering, pedagogy and workmanship.

Futuristically, the robotics profession is going to be very rewarding and it is at its infant stage in India. The teachers who are taking up robotics realize that it is going to be the most prized experience in their resume. In the current scenario there are few good teachers who have the technical knowhow of robotics, which becomes even more challenging with pedagogical gaps. The lack of trained teachers is affecting the growth of robotics education at the required rate. Secondly, a change in perception is needed at various levels to see robotics in pre-college education as multidisciplinary learning and its contribution toward 21st century skills. 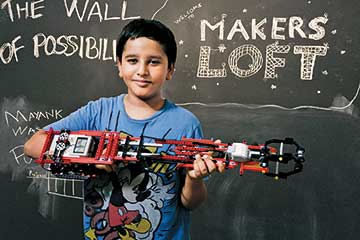 One argument frequently put forth by the parents is, “School robotics is not permitted in the colleges”. We don’t see any reason that it is going to interfere with any other domain of learning. Instead, the technological integration of robotics is going to provide insight into different speciality areas like automation, coding, instrumentation, IOT-Internet of Things, etc.

Another perception is that the teacher holds value to the learning experience which is to be accounted for his or her performance. All the other things gradually lack the vigour of persuasion. Such backwash in the curriculum has led us to an exam-based education. Robotic is a great way to counter such backwash in education with a higher level of engagement. In robotics, the child needs to construct the robot, programme and analyze the application, which results in higher knowledge ownership.

Robotic provides ample opportunity to verify the mathematisation of real life problems, where we first convert the real life problem into math followed by computation and reconvert it into a solution through hands-on activity. For example, a student can verify the gear ratio with torque or load carrying capacity versus speed and decide the inclination angle of the road. It not only improves grades in math and science but contribute towards the quality of grades. 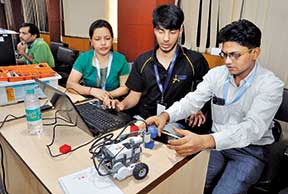 The structure and effective functionality of the robot comes under the engineering aspect of the robotics education. A robot should be sturdy, stable, and built with the design required by the situational task to be achieved, e.g. the orientation and location of the sensors, built-up strength, and shape and size. Therefore, hands-on construction is an important aspect of robotics, which involves back and forth modification based on coding. At times it is quite difficult to decipher if the problem is at the coding level or the problem is with the robot design. A student trying to crack the problem goes through a holistic learning experience. Thanks to well researched brands like LEGO, Tatrix, Max, Meccano, etc., robotics education has become highly approachable. Although the cost associated with the hardware is quite high, the economics of running a robotics lab can be achieved by having a large number of end users. The parts manufactured by these companies last almost five years on an average and the maintenance involved is negligible.

Pre-college level robotics comes with two important features. One is GUI-Graphical User Interface which requires the user to drag and drop the function tab for programming. A child as young as 12 years can do coding on such platforms. Second is the auto installation device which allows the robotics student to observe the real-time variation as and when it happens. Most of the software is free and easy to download.

Internationally it gives an avenue for global exposure through the WRO-World Robotic Olympiad, FLL-First Lego League. More than 90 countries participate in these competitions to hone their skills. Over the years, Indian representation has been increasing steadily. Last year India was the host country for international WRO held in Delhi and two teams from Makers Loft participated in the National Robotic Olympiad held in Kolkata.

From the Indian perspective many schools are now finding space for robotics in their core curriculum. Robotic also received recognition from the Government of India. NITI Aayog under the umbrella of Atal Tinkering Lab has accepted robotics in principle. Around 250 schools have received funds for the same this year. Currently around 24 innovation hubs are active across India under NCSM – National Council for Science Museum (Ministry of Culture) imparting robotics education as a regular event. But the real challenge lies in the availability of trained professionals. Robotics is here to stay and grow as a prime 21st century skill oriented education.

The author is an educator at Makers Loft, a maker space in Kolkata where the young and old come for tinkering. He can be reached at [email protected].