Counter culture, anti-establishment stance and apathy towards bureaucracy marked the decade of the 1960s – not only in the US or the European first world but also in the other relatively damped out countries as well. This apparent lack of interest in the commune at large probably had its measures somewhere else. Though not obviously correlated, it is not incongruous to reflect that the first microchip from Intel 4004 could happen only in 1971 – did not happen earlier, and never later as well. In 1981, IBM introduced the first computer for the home user, and three years later Apple replied with a Macintosh. With the personal computer, the need for a shift from a computational machine to a more subtle one mimicking the human emerged. What followed was a shrinking of size – metaphorically from a world to an individual traversing from the real to the virtual. Today, with the latest smart phones – the world is literally in the pocket. In this transition, there are essentially two vital cogs – the emergence of the Internet and the cloud burst of the telecom industry. The Internet, courtesy the smartphone, is the virtual real world where you and I exist – literally and symbolically: people get recognized by their Facebook profiles, their tweets in Twitter, or their Instagram photos. If the laptop was the last formal device which was inanimate and hence external to the existence of an individual, the smartphone-tablet duo has literally obliterated the divide – they have become essential in defining us, in shaping our identities and in dictating how we behave with whom and at what time of the day.

Even 15 years ago there were dial-up connections in India – we were accepting speeds that we can’t think of today. With 3G and LTE (in a few pockets though) speed as they say is ‘lightning’. When LTE (Long Term Evolution) was launched in Kolkata by Airtel for the first time, they promised throughput of tens of MBps with the maximum capacity much higher. That is a phenomenal achievement. However, in 2009, scientists in Bell Labs had set up ways to optimize optical transmission at 100 Petabits per second kilometer, i.e., sending the equivalent of 400 DVDs per second over 7,000 kilometers, roughly the distance between Mumbai and Durban, South Africa. So, it is not distant that the infrastructure of the research labs will be rolled out to the wider masses, and speeds in the range of MBps will exist only as academic interest. Combine this with how aggressively some of the Indian cities are also trying to become ‘smart’ with over-encompassing coverage of the Internet via Wi-fi, it becomes dreadfully apparent that we are trying to move fast with the speed of the technological advancements.

Internet is today a part of our lives. The more people became reluctant to move around and exist in the community, the more the urge for this customized isolation gained prominence. For a long time, television played the role. In the Indian context as well, TV started off being a fancy device for the rich in the 70s and over the decades reached the interiors of the country, thanks to the different manufacturers who could bring out affordable sets of different sizes catering to the needs of billions. Yet, television is mostly a unidirectional experience where the viewer is mostly a consumer. The Internet for the first time gave us the opportunity to be a part of it – since here everyone is a producer as well as a consumer. You post updates on a social networking site, read there, write blogs, gather information and contribute as well. Like television, many indigenous companies saw the opportunity in this, started making inexpensive smart phones and telecom operators started charting out different price plans making it easier for a diaspora to respond.

What essentially this means is that there is a paradigm shift in the last ten years or so. We have suddenly become more aware of the self, more needful of stamping our existence – in the virtual world we want us to be heard which probably the real world seldom offers to most of us. We have now started to produce more than what we consume, thereby producing tons of data over the web. Tons and tons of data.

And the crux of the problem lies here.

What is data without information? What is information without knowledge? With Petabytes and Terabytes of data often termed ‘Big Data’, it is becoming increasingly difficult to store all this data – the rate of growth is alarming as well. The problem is, in the physical world we become aware of the space crunch we live with always – the metro cities dwindling under the pressure of lack of space for its citizens. In the virtual world we are not aware of the crunch as such from the time Gmail started off with virtually ‘unlimited’ space in your mail box. With that, the importance of constraint was lost, and now with social media – there is literally no quota on space usage on us. We produce more and like always with this opulence, we produce a lot of garbage.

So, what becomes pertinent is to have an expert system in place which will be able to take an informed decision as to which data is redundant and which can be useful. With our daily activities we are continuously generating patterns – of behaviour, of social interaction and more importantly a trend analysis which may return potential health problems that will pop out a few years later. Already, many of the leading hospitals and pathological labs in our country have started scanning prescriptions and digitizing pathological reports. This again adds a lot to the data content – the hope is one day you can get into any hospital of the country and with a unique identity, all your test reports and diagnosis data till date will be available to experts to scrutinize and act upon. Only then, this storage of data will be meaningful. 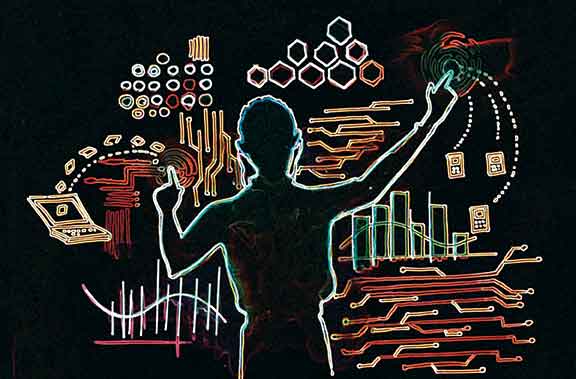 With Google Glass and smart-watches, that day is not far when most of us will wear small chip devices somewhere on us which will gather general health information from our system, real-time and will send it to some global repository. An expert, automated monitoring system may then analyze the data and raise alarms if there is an aberration which it cannot justify. It is already proven with the Internet that there is a huge repertoire of information – and at many times the data behind the information is also not authentic. Again, the ‘ease’ of availability leads to a casualty – the effort needed to pursue literally anything. Social scientists have been alarming us with the easy access of ‘problematic’ content on the web – through pornographic sites, adult chat options and the like and the correlation of the virtual visual pleasures being enacted as crime in the physical real world. Yet, that cannot be a drawback of the Internet. There has to be other ways of harnessing the evil and filtering only the good.

The spread of the Internet has already enhanced global connectivity – the exposure to different culture and languages makes us less vulnerable to shocks, and more open to acceptance. Today, the western world is not that unknown to us, courtesy the television first and more rapidly, the Internet. The Internet has provided a democratic platform which is not always bounded by the borders of nations or by the colour of your skin. You don’t need a passport to travel places virtually, there is a lot of homogeneity – the problems of it are a different discussion altogether. A day may come when there will be virtual ‘nations’ on the Internet with more netizens in them than the citizens of many physical nations. I, for one, am extremely interested to observe the nuances of such a possibility.

The other aspect where the speed of Internet (both the connection and the technological advancements) has opened up new avenues is in education – online courses even from reputed institutes have gained prominence and soon there may be learning with less human instructors than before. What is important is again, the obliteration of the physical constraints – you may reside somewhere else and can avail a course at your preferred time and duration – it is the learning that triumphs.

Think of a day when you are returning from your school in a car or a metro or a bus which is automated and synched with the overall traffic system of the city. You are wearing Google Glasses and watching a cinema there and suddenly the smart-watch you are wearing indicates that your vehicle may need to divert to a different route due to traffic congestion ahead. Your Google Glass will show you the new map/route. As you approach your home, within three stops of your stop, the intelligent AC in your house gets started if it is summer. You arrive at your home and your doors open by your presence. You open your refrigerator to have some cold drinks and automatically as you bring the can out, you get an update in your smart-phone’s to-do list that you need to stock yourself with cold drinks. If it be so, the same requisition may be passed over to your preferred grocery as well so that the next time you visit them they already have a list of essential items for you. You then read stuff, be on social network sites, video chat with friends and watch television shows aired at a different time by downloading them from the Net and watching them through Chromecast. As you get into your bed and close your eyes, that micro-chip that monitors your body alerts the eco-system of your house to put off the lights, to double lock the door and to adjust the AC depending on your sleeping pattern.

Isn’t that a nice future? It may well be ours if and only if we actually become smart – in the choices we make about ourselves and life.

The author is an independent film scholar and critic. A physics graduate from Presidency College, Kolkata and an MCA graduate from Jadavpur University, Amitava is part of the Indian IT industry and resides in Kolkata with his wife and son. He can be reached at amitava.nag@gmail.com.