‘Military intelligence’, said the comedian Groucho Marx, ‘is a contradiction in terms’. There is a semblance of truth in this, for not many of us associate ‘intelligence’ with the men from the armed forces. These men of action are better known for their sense of discipline, their neat attire and their grooming. ‘There is something about a man in a uniform’ is a mantra frequently chanted by the leading ladies in several Hollywood films. It is not surprising therefore that quite a few words that we use in everyday context have been derived from these men in the military. 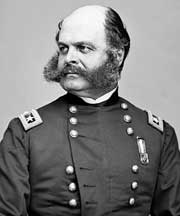 Take for example the case of Ambrose Everett Burnside, a General in Abraham Lincoln’s army, who fought against slavery during the American Civil War. This Yankee was not known for his acumen; in fact, his career in the army was anything but stellar. As a General, he led his unfortunate men in several campaigns which ended in disaster; he was almost court-martialled by the powers that be. Though he didn’t earn a name for himself as a brilliant tactician, he quickly became a well-known and an easily identifiable figure in the army thanks to his breathtaking whiskers. The clean shaven chin and the flowing whiskers running along the side of the face set him apart from the other Generals in the army. When the Civil War ended in 1865, the blundering Burnside turned to politics and was elected the Governor of Rhode Island. Here again, it was not his political savvy that caught the attention of the public, but his distinctive facial hair. Soon it became fashionable for men to sport whiskers like that of the Governor. The public then decided to immortalize Burnside by naming the ‘hairy substance’ after him. They reversed the General’s name and called the facial hair ‘sideburns’. 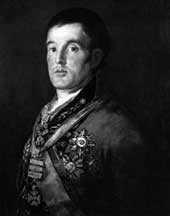 The expression ‘put up your dukes’ is frequently used in American English to mean put up your fists and get ready to fight. What is the connection between a duke and a fist? On the face of it, absolutely none! When first used, a ‘duke’ referred to a nose. The nose in question was that of the Duke of Wellington; the man who defeated Napoleon Bonaparte in the Battle of Waterloo in 1815. According to historians, the Duke was quite the ladies man; he was suave and charming to the core, and the members of the opposite sex just couldn’t get enough of him. By all accounts, his face was incapable of launching a single dinghy – let alone a thousand ships. The only arresting feature in this not-so- handsome Duke’s face was the rather prominent nose: if historians are to be believed, the size of his ‘beak’ would have given the likes of Cleopatra and Pinocchio a run for their money. The officers and the men who served under Wellington began to affectionately refer to any nose which was unusually long as ‘duke’. With the passage of time, the word became a general term for a nose: the size and shape did not really matter. Since the human fists were frequently employed to put a ‘duke’ out of joint, the fists began to be called ‘duke busters’. Soon, the word ‘busters’ was dropped, and this resulted in a change of meaning for ‘duke’. It no longer referred to the nose, but to the fist.

The nickname of the well-known Hollywood star, John Wayne, was ‘Duke’. This was not because the actor who made a name for himself in westerns had a prominent nose or that he played the role of a duke in his first film. Duke was actually the name of Wayne’s dog! A fireman who saw John Wayne and his dog Duke together, referred to them as ‘Big Duke’ and ‘Little Duke’. The nickname stuck. Perhaps it is this detail from John Wayne’s life that resulted in Steven Spielberg naming one of his famous characters, ‘Indiana’ Jones. In the movie, the archaeologist Dr. Jones is affectionately called ‘Indi’ or ‘Indiana’ not because it’s his original name. Indiana was the name of the dog that Jones had when he was a child. 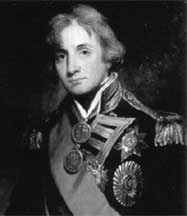 ‘If winter comes, can spring be far behind?’ asked the poet Shelley. If the men from the army are capable of adding to the English lexicon, can those from the Navy be far behind? Mavericks like Admiral Horatio Nelson ensured that English had a liberal sprinkling of expressions from the Navy. The idiom, ‘turn a Nelson’s eye’, meaning ‘to deliberately turn a blind eye to something’ is the Admiral’s contribution to the language. Nelson, an Admiral in the English Navy in the early 1800s, was blind in his right eye. During the battle of Copenhagen in 1801, Nelson, under the command of Admiral Hyde Parker, attacked a fleet of Danish and Norwegian ships. During one stage in the fierce battle, when defeat seemed imminent for the English, Parker signalled Nelson to withdraw. When his men pointed this out to Nelson, he took out his telescope, placed it on his right eye, his blind eye, and informed the men that he could see no such signal coming from the Admiral’s ship. Nelson ordered his sailors to continue fighting with renewed vigour, and in a matter of hours emerged victorious.

If you are a cricket fan, you are probably aware that the score ‘one hundred and eleven’ is often referred to as ‘nelson’. This score is considered unlucky by many, and umpire David Shepherd used to perform a hop whenever the scoreboard registered this number. This term from cricket is also in honour of the Admiral. According to some pundits, Nelson, during the course of his many battles, lost an eye, an arm, and a leg. He had one of each, and that is what ‘111’ signifies. This is untrue because he had both legs. Some people believe that the third ‘one’ refers to some other part of Nelson’s anatomy. Which one? Well, that’s for me to know, and you to figure out.