“It was a hornet’s nest that initiated my journey into the world of insects,”1 says Geetha Iyer in describing her many encounters with hornets that opened, to her, a new window into the world of insects. She shares her narrow escape, unscathed, after being surrounded by a swarm of angry hornets2 in a new book on insects, “The Weavers: The Curious World of Insects”. Ordinarily, one would assume that incidents such as these would likely have people stay away from hornets. Not Geetha. She proceeds to share her own detailed observations of the nest-building activities of hornets and in the process, introduces us to silk, the material that serves as the leitmotif of this book, and its role in the pupation of hornet larvae.3 In this book, Geetha combines the narrative natural history approach pioneered by Fabre4 with the adroit use of the metaphor and theme of silk to weave together a rich fabric of insect evolutionary history, insect biochemistry, insect behaviour, insect development and insect taxonomy (classification). We are shown the intricacies of the lives of familiar insects such as hornets, wasps, bees, ants, preying mantids and moths, and strange ones whose names you might probably hear for the first time, such as web-spinners and owl flies. 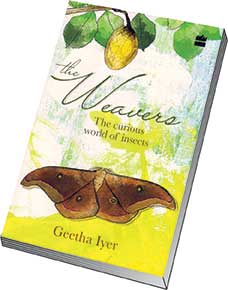 The book begins with an invitation to the world of insects that has fascinated Geetha for years. We are taken from China to Byzantium, from the Triassic to Cretaceous, through fascinating histories of silk – in human society, measured in millennia, and in insect evolution, measured in millions of years.5 While the class Insecta as a taxonomic unit comprises over a million described species and estimates of six to eight million species6, this introduction to their world involves only those insects that produce silk, a smaller but significant subset of those millions. In the ensuing chapters, we get introduced to different orders of insects, each chapter either devoted to one order or a few related orders. A chapter in the book is typically divided into sections on evolutionary history of the order in question, descriptions of physical appearance, ecology, behaviour and a detailed analysis of the role of silk in that insect’s life. The origin of the silk, whether it’s from the labial glands in the Lepidoptera (butterflies and moths), or the Malphigian tubules in the Neuroptera (lacewings and antlions), its chemical composition and means of production is discussed in a fair amount of detail with each insect group. The concluding chapter provides some introductory information on the chemical nature of proteins, the main component of silk, to those who might be interested. The biological implications of the chemical nature of silk are often explained in each group of insects, such as the cocoon silk of the lacewings, which is a mixture of protein and lipid that perhaps allows for the cocoon to have greater mechanical strength and perhaps even a waterproof coat!7

Detail of this kind is nowhere burdensome or distracting since the style is direct, and technical terms are explained when introduced (hemimatabolous – insects that reproduce and grown through incomplete metamorphosis, or repagula – unfertilized eggs, from the Latin repagulum or barrier), doing away with the need for a glossary. In fact this detailed approach is a strength of the book, as it effectively opens up the wondrous world of new insects to the uninitiated. How many of us knew that silk is a good candidate to explain the diversification of caddisflies to occupy different habitats?8 Or that Tussar silk has “potential in…cardiac therapy as scaffolds to regenerate cardiac tissue”?9 There is even a lesson on the energy cost of silk production!10 The information presented in each section allows the reader to get a good feel for the content of the book, but never so much that you drown in excessive detail – you are soon presented with another section that has its own set of surprises in store. Information boxes are used to present material related to the narrative, interesting as standalone facts (p. 76), or as tidbits (p. 157) or anecdotes.

The book is a veritable treasure trove of information about these insects beyond the role of silk as well. The mating song and dance of the lacewings, for example, is presented in great detail.11 So is the nest construction of the Oecophylla red ants.12 One of the most fascinating stories described is of mindboggling hyper-parasitism in the lifecycles of various parasitoid wasps.13 This book is a successor in many ways to a previous work on insects, Satpada14 that Geetha co-authored with Rebecca Thomas. While Satpada mainly served as an introductory reference and field guide to the world of insects and the means to study them, this book brings to fore a lot of scientific research that has been published on the silk insects from across the world. The lengthy bibliography presented at the end of the book, organized chapter-wise, is evidence of the extensive research that Geetha has quoted in this book. One of my very few complaints with the book, perhaps the only one, is some laxity in cross-referencing of information presented in the text with the appropriate source as listed in the bibliography. In a book that is intended as an introduction to insects to the ‘intelligent layman’, this lack of formal referencing can perhaps be seen as an advantage, as not distracting from the main text. In any case, all the information presented in the book is not researched from other sources, but has a significant sprinkling of Geetha’s own observations. In her observations of wasps and ants, her eye for detail reminds me of Fabre’s ruminations on the pupation of the Great Peacock Moth.15

A book of this kind that tells so many stories of the natural world is enhanced by 16 colour plates with photographs, many of them taken by Geetha herself, representing a wide range of the insects discussed in the book. These well-produced photographs help the reader to imagine the lives of these insects, and can serve as a field guide to them as well! The photographs might also cause some of us to recoil at the sight of insects, and Geetha has a few words for us there as well, “it is ironical that so many of us hate insects, yet spend thousands of rupees willingly to drape ourselves in what is primarily insect saliva!”16 I highly recommend this book to anyone who might be curious about insects, and especially to the ‘insect haters’ among you, who could perhaps look at it as a travel guide to the Antopolises and Cocoonpurams of this most diverse group of organisms in our world – to boldly go to places where no insect hater has gone before! At Rs. 399, this is perhaps the most reasonably-priced ticket you might get to go there!

The author is a part of Centre for Learning, an alternative school located near Bangalore. He teaches biology, statistics and chemistry to senior students and is closely involved in the school’s nature education and library programmes. He can be reached at dumaketu@gmail.com.