I was once involved in a project that aimed to do precisely that: identify misconceptions children have related to different subjects. They were asked some questions that would bring up some misconceptions and they had to discuss the answers among themselves so that the misconceptions were dealt with and removed.

Unravelling misconceptions
I found the discussion on a question from science fascinating. The problem given to them was: “Two sheets of paper, P and Q, are exactly the same. If P is crumpled, is P heavier than Q, or is Q heavier than P or are they of the same weight?” A majority of the students, over 40%, said that P is heavier than Q. 22% said Q was heavier than P. Some explanations for these answers were intriguing and insightful.

Some of them said the crumpled paper P was lighter because its size had decreased. Others said that P is heavier because its density had increased, while some others said that air particles trapped in the folds of crumpled P increased its weight. They were misled by a wrongly understood relationship between the weight of an object and its size and density. The method of thinking was incorrect too, as if we want to know the weight of P, the weight of air particles trapped in the folds of P should be subtracted from the total weight.

Another response from students was fascinating. One student said that when we hold a crumpled paper in our hand it feels heavier. This seems intuitively correct, but it sets aside all scientific concepts and methods. Science often reveals counterintuitive explanations of phenomena we experience around us. Explaining our perception of such phenomena and deriving a correct theory requires a good understanding of the scientific method.

We teachers consider it our duty to correct our students when they use a concept incorrectly, or misapprehend the relationship between concepts, or if their answer rests on a mistaken assumption, or if they commit a mistake in their method.

I have a problem with responding to misconceptions by immediately correcting them, especially when we are teaching. The obvious issue with this reaction on our part is that pointing out mistakes when students are working on answers could probably lead to them becoming demotivated or disinterested. Worse still, they might be led to believe that the right answer is what the teacher thinks is right, which borders on indoctrination. 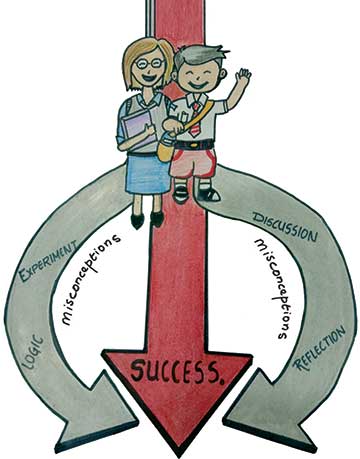 Misconceptions and teaching
That is not all. Responding by immediately correcting children exposes some misconceptions about the learning that we teachers hold. Our response is based on the premise that we know the right answers and the methods and it is our duty to lead students along the right path and hence the right answer. If they do not follow that method or introduce concepts that are not part of the process we promptly repair the method and lead them to the right path.

Another subtler but more problematic misconception, that Paul Standish calls Programmed Learning, is the imagination of how learning happens. We often presume that to arrive at the correct answer to certain questions, one needs to go through specific steps of thinking. These steps come from the particular discipline, in this case science. We know the end result expected (Point B), we know what students know at that point in time (Point A). We identify ways in which students can move from Point A to Point B, and we want to lead students along one of these determined paths.

Standish points out that programmed learning presumes that point B is the perfect state and students are at point A that is not perfect. They can be led to the perfect state if they learn the concepts, and the methods that scientists have used to find the correct answer. Our teaching plans are designed to keep children on the learning path and not let them stray from them. If any statement they make comes in the way, we find ways to get rid of them, and nudge students further along one of the predetermined paths.

Problems with programmed learning
The term programmed learning comes from our imagination of how computers work in a programmed manner accurately following instructions they are given. But the human mind does not work in this manner. Many different thoughts come to our mind when we are learning. In this case some students were reminded of density, and the fact that denser objects feel heavier. Others thought of the air trapped in the paper and thought that increases the weight of the paper. When we summarily challenge what students say, or ask them to discard these ideas so they come back to the right path, they are left with doubts and questions which they have not been allowed to articulate. This results in a profound sense of doubt leading to limited or even no understanding of what is being taught. Our misconceptions about teaching are interfering with the students’ understanding of weight.

More importantly, acknowledging and resolving these misconceptions like “heavier objects fall faster” or “the weight of trapped air particles can and should be added to the weight of paper P” or “if the mass of an object is spread over a larger area, its weight is different” will contribute significantly to understanding the scientific method. Resolving them will make the class exciting and help students understand the scientific attitude through direct experience. By summarily resolving them we are limiting their learning and even depriving them of “doing” science the way science should be done.

Underlying this imagination of programmed learning is the presumption that students can be perfect scientists only at the end of schooling. In the process we control their creativity and reject any method they might devise to answer the question. We may know these methods are wrong, or we may think the method is long and painful. But the student’s thought process is evolving, and they are developing a method of engaging with a question they are facing. We have to allow this thinking to progress, so that they can find the answer themselves and learn features of the scientific method. 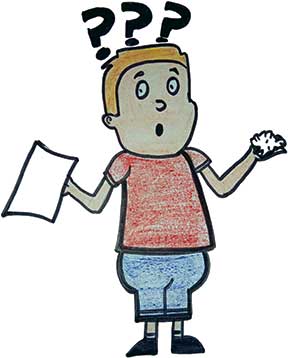 How does a teacher use misconceptions?
What should a teacher do when she encounters a misconception? In the research project described earlier, the moderator asked, “Why do you think the density of the paper changes?” The students then discussed this among themselves and dealt with questions from other students like, “How does density change?”, “Q floats because of air resistance, not because it is lighter than P.” and finally arrived at an important question, “But what have we added to P that its mass increases? Without increase in mass, its weight cannot increase.”

The students dealt with these sub-questions themselves and arrived at an answer to the main question. They navigated through various concepts like mass, surface area, density, air resistance and logic, fortified by logic and reasoning to arrive at the answer. They arrived at an answer using a method they developed themselves. This way of learning gives students deep insight into the answer, reasons why it is correct, understanding of other associated concepts and the nature of the relationship of those concepts with mass and weight, and finally the scientific method. In answering that simple question, they experience the scientific attitude by practising it.

Over and above all these cognitive aspects, channeling this answer out through their own self and thinking, amplifies, intensifies and gives new radiance to what they are learning. Adopting this approach encourages children to move towards their own “best selves”. Perfection should not be left for later when they reach higher grades; classes in all grades should be dedicated to learning the scientific attitude and other aims associated with the subject.

Classes are ends in themselves, not mere means
This approach of allowing students to move along the path they are discovering at each step is rich, creative and also resolves a larger problem with the way we teachers think about education and its aims. Most of us think of the aims of education as a result of 10 or 12 years of schooling. This leads us to think that individual classes are means to that larger end. This assumption results in us ignoring or not paying enough attention to the fact that larger aims of education manifest in every class. Needing to have a scientific attitude and understanding the scientific method manifests in every science class. Needing to view events with the attitude of a historian and learning the method of history manifests in every history class. Needing to view events with the attitude of a democrat and learning the underlying assumptions of democracy and the methods of a political theorist manifests every time the concept of democracy is encountered. This is true of all disciplines and subjects.

We have to see larger aims of education manifesting in all our classes and encourage children to engage with associated thought processes, rather than leaving these aims for other classes or for later in education. Classes are not the means to a larger end of education. In this sense, each class is an end in itself. These so-called misconceptions are a boon to us so we can employ good pedagogical methods that help us meet larger purposes of education.