When acting techniques are brought into the English or drama classroom it can help students with social skills, literacy, creativity, team work, relaxation, mindfulness, spontaneity, listening, and focus. Here are some exercises to add acting techniques into your classroom.

A fun, warm-up game that can inspire the creation of some interesting characters.

Age: 8 plus.
Skills: Creating a character, imagination, movement and mime.
Participants: This exercise can be done alone or in a group.
Time: 5-15 minutes (depending on the age group).
You’ll need: A room big enough for students to walk around.
How to: The students walk around the room. Ask them to become aware of their walk, to think about whether any part of their body is leading, and if it is, to adjust it so that the walk is neutral. Now explain that you will call out a body part that students are to lead with. Let’s start with the nose, for example. Now the students walk around the room leading with their nose. It’s as if someone has a piece of string attached to their nose and this string is being pulled. Ask the students to think about what type of character might lead with their nose. A nosy neighbour perhaps who likes to gossip? Or a schoolteacher who doesn’t like children? Let the students have fun creating characters who lead with their nose. They should do this silently and only use body language to communicate these characters. Now change the body part to lead with – the hips perhaps. Have the students walk around leading with their hips for a few moments and now ask them to walk around as a character who might walk like that. A supermodel maybe? Or a rapper? Or a businessman or a woman? Play like this for a while, leading with many different body parts – the chest, the chin, the forehead, the stomach, etc. Once this is finished, the teacher can ask the class to sit down and see if any volunteers would like to show some of the characters they have created.

Storytelling exercise: Let me tell you a story about…

A storytelling game where students create a story based on an object.

Age: 8 plus.
Skills: Communicative skills, imagination, confidence, improvization, listening and storytelling.
Participants: Pairs.
Time: 10-15 minutes.
You’ll need: Anything between 5 and 20 props laid out in the centre of a circle of students. These props can be anything, but variety is good. Examples include a hair dryer, a mug, a pair of shoes, a toy car, a pen, a wig, an apple, keys, a book and some soap.
How to: The class sit in a circle, and in the centre of the circle, there’s a pile of props. As explained above, this can be a collection of any random objects. One student then comes into the centre of the circle, takes one of these objects and tells the class a made-up story about the object. The more eccentric the story, the better! If Alex picked up a bar of soap, he could tell the class any story he liked about it. Perhaps he would explain that it is a magic bar of soap that makes you invisible as you lather it into your skin. He might go on to tell a story about how he once used the invisible soap at school and then he sneaked into the staff room and found out that all the teachers were aliens! Or he might tell a different story, all ideas are welcome.

An exercise where a well-rehearsed scene is shaken up, an activity often facilitated in the audition room by the audition panel.

Age: 8 plus.
Skills: Imagination, awareness and creativity in response to a text.
Participants: This exercise can be practised alone or in a group depending on whether it’s a monologue or a scene.
Time: 10-15 minutes.
You’ll need: The students need to know a monologue, poem, or a scene by heart.
How to: If students are working on a scene or monologue and it has become a little over-rehearsed, ask them to perform the piece, and while they are performing, call out different things for them to do. For example, ‘find your car keys’, ‘make a cake’ or ‘cut your finger nails’. This may startle the students if they have become set in their ways but throwing them is good; students should never get into the habit of robotically performing a piece. Performing should always be fresh, scary and unpredictable. This exercise is a great way to shake the actors up if they are performing on autopilot; it can open up the actors to play the character in a way they might not have before; in some cases, it can also distract them so that the emotion of the piece bubbles up from the inside unexpectedly. Once when I studied under a very talented acting coach, he asked me to perform my monologue while washing the dishes. This felt unnatural and strange to me at first as I was used to performing the piece in a set way. But to my surprise, half way through the monologue, real tears started rolling down my cheeks; washing the dishes somehow opened up a pathway that allowed the emotion of the piece to come through.

Adding direction such as washing the dishes, doing a balletic dance or jogging on the spot while doing a scripted piece is commonplace in the audition room. The audition panel gives out bizarre directions like this to see if the actor can take direction without it stumping them. One friend of mine, who was auditioning for a film, was asked to perform his piece imagining that he was in an elevator that was filling with skittles.

There are many ways to add more depth to drama and improvization games to stretch a student’s acting ability. I’ve found that students thrive when they are challenged in this way and encouraged to add multiple dimensions. In my book 100 Acting Exercises for 8-18 year Olds, you can find simple and advanced techniques for the classroom and rehearsal studio. 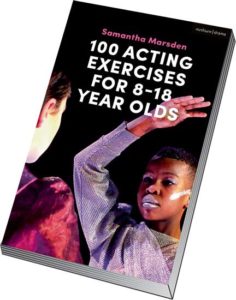 100 Acting Exercises for 8-18 Year Olds
Theories and techniques of some of the greatest theatre practitioners including Sanford Meisner, Constantin Stanislavski, Lee Strasberg and Uta Hagen provide a basis for Samantha Marsden’s original exercises. The exercises have been tried and tested in the author’s own classroom. Focus points used in leading drama schools such as voice, movement, relaxation, character development and understanding text are recreated for a younger student.

The author studied method acting at The Method Studio in London. She went on to study Drama, Applied Theatre and Education at the Royal Central School of Speech and Drama. She worked as a freelance drama teacher for eleven years at theatre companies, youth theatres, private schools, state schools, special schools and weekend theatre schools. In 2012 she set up her own youth theatre, which quickly grew into one of the largest regional youth theatres in the country. She also writes for The Stage and is the author of Teach Drama: How to Make a Living as a Freelance Drama Teacher.