This is a reflection by a student of art who is now a practitioner. She asks us to reconsider the ways in which art is positioned within the school curriculum and argues for a broader approach to defining (or not defining) and teaching the arts.

About a year ago, I met an English teacher at a gallery where my work was on display. After discussing a particular painting with her students, she came up and asked if she could photograph it. She explained that it was for a lesson on feminist literature that she was scheduled to take, and was hoping to include an image of this work in her classroom presentation. What she was recognizing was that art could be more than an individual’s self-expression. It could be a platform for ideas and learning, with context and references to culture and history – even science. Who would have imagined that the evolution of the watermelon could be traced through still-life paintings that were created across the 17th and the 19th centuries?

Back in school, we could specialize in art from the 9th grade upwards. Until then, of course, art classes were scheduled once a week and would often get borrowed by other teachers for an extra lesson in math or science. These classes were restricted to a topic that we would be assigned each week and they neither aimed at developing our technical skills nor a body of work that would interest us. Being, perhaps, the only one enthusiastic about the 40 minutes of drawing each week, I would end up having to do art assignments for a dozen other classmates before the weekly deadline – subtly altering their content and styles to avoid any trouble, lest the teacher found out.

Looking back, it seems a shame that art classes were structured narrowly and given little weightage – rather than looking at them as part of a larger, more interdisciplinary learning and education.

Perhaps this means that there is room to rethink the position of art within creativity, and that of creativity in education and literacy. To re-consider how subjects could be integrated rather than taught in isolation, to make learning multidimensional, and art more relevant in a child’s life starting from primary education. 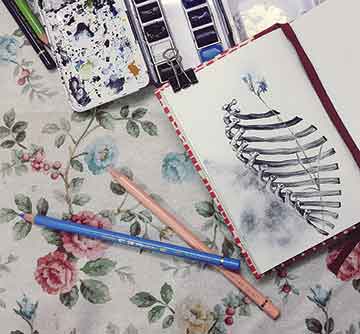 At 18, when I decided to pursue fine arts, I was showered with an outpouring of disapproval, followed closely by that of sympathy. This came foremost from concerns around the financial struggle that could come attached to a career in the arts. Followed by those who indiscreetly assumed that the choice came as a result of academic failure. Even today, conversations with family and acquaintances take an awkward turn when they earnestly attempt to understand what it is that I am actually doing with my life.

When I enrolled in art school, there were delineations between the different departments, accompanied by the argument about which specialization was superior. And in the confines of our studios, it was more often than not our instructor who created around us these boundaries that dictated the correct style to paint in, the superior medium to work with, the right topic to depict; all the while encouraging us to pursue pure art rather than going commercial. This continued right up till our final year and ended up confining my practice as well as its potential to the mediums and style in which we were allowed to paint. In the same breath, we were also taught that there was no limit to what an artist could conjure.

Two years into art school, I wrote myself a note:
“I’m beginning to believe that good art is less about possessing inborn talent or artistic skills, and more about making the best out of the little that is available. Whether it is the material, the expenses, or simply the workspace (especially at home) – there always seems to be a compromise.” (2nd December, 2009 – adapted)

By the final year, I was disillusioned, disgruntled and on the brink of giving up something that I felt passionately about. The gap year before enrolling for a Master’s programme, however, enabled a process of unlearning and relearning. Dramatic as it sounds, I renounced the stretched canvas and turned to a medium that I had to discontinue in art school – water colour. The Internet exposed me to possibilities that I never knew existed, introduced me to artists who I will probably never meet, yet inspired me to pick up the brush once more. Many art schools across the country either oscillate between rigid, unrevised pedagogic processes or colossal ambitions to create art that is ‘new’ and ‘path-breaking’. Both dangerous extremes. Down the road, I had a fairly late realization – Art could be anything that I wanted it to be. It could be a canvas on a wall, a comic book, or a movie. It could be a mural, sculpture, a public project, or an audio piece. It could be anything, as long as it gave me conviction.

My engagement with art schools continues through an art education programme that I work for. This, while trudging along in my own practice; the job sparsely leaves me any time in the studio. However, an experience that will stay with me is a workshop that I developed for the students of an established art school. It was meant for interested students to engage with ideas and spaces outside the confines of their studios. What became my greatest challenge was to convince my participants that one needs to pause and reflect in a creative process and that in order to learn and grow, one must be willing to fail. It was a reminder that I needed just as much as they did.

What my journey through art school has taught me, more than anything else, is that the creative process is always an ongoing one – a relationship that needs to be worked on consistently. Often the greatest battle is simply showing up at your studio. The work always follows.

The author is a visual arts practitioner based in Hyderabad. She works largely with watercolour and fabrics. She has worked in the capacity of a curator for the Students’ Biennale in Kochi for their 2014 and 2016 editions, and recently represented Hyderabad in an artist exchange programme at Bordeaux, France. She can be reached at faizahasan305@gmail.com.