Revathi entered the classroom and was greeted by screams and laughter. Her scraggly bunch of 15 she thought fondly.

“Class, keep quiet. The 10th standards are writing a test. Don’t disturb them,” she said as she placed her handbag on the table and opened the register.

The decibel levels dropped except for a low intermittent giggling from the corner of the room followed by “Jothi is laughing, ma’am. She is not keeping quiet ma’am. She is laughing ma’am. Jothi should be punished ma’am.” 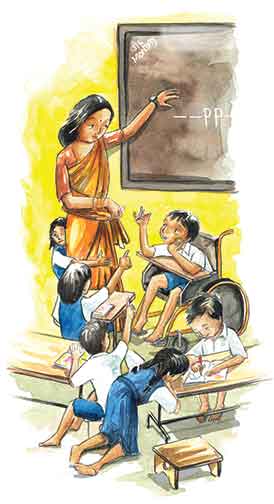 Revathi suppressed a sigh and turned to face Umesh who giggled, belched loudly and then giggled at his transgression. This set off the class again and Revathi banged the duster on the table and said “That’s enough. The next person who opens his or her mouth will be sent out the class. Umesh, please say, ‘excuse me’. Otherwise, I am going to call your mother and complain about you.”

“Good, all of you please take out your maths book. We are going to practice multiplication and division sums today.”

“Hi Revathi,” said Anuradha, one of the volunteers who worked with the children. “Is Umesh behaving himself today?” she asked and waved to the children who greeted her with a cheery good morning.

“Thanks for coming Anu. It’s a relief to see you on Monday mornings. Umesh has started his burping spree. I hope he doesn’t start farting now. You know how it distracts the kids. It’s so difficult to control them if their attention gets diverted,” whispered Revathi.

“Can you help Balu and Vijay with their maths sums?”

Anu sat down between Balu and Vijay and worked with them patiently on their multiplication. Though Balu and Vijay were almost 15 years old, they found it difficult to multiply or divide even three digit numbers. “What is seven into twelve, Vijay?” asked Anu, and waited patiently while Vijay looked blank for a while and then recited his 12 times table from the beginning.

“Is it 92, ma’am?” he asked. “It’s 84,” said Balu with a triumphant look at Vijay who looked at Anu with an anxious air. Anu suppressed a sigh and said, “It’s okay Vijay, why don’t we try again? Now, let’s go the next sum, which is a word problem.” She watched as Balu struggled over each word and took time to string the sentences together.

Revathi wrote the math problems on the board and went around the class correcting sums and helping children who were struggling with them. Nirmala and Manikandan had finished with their problems. She put a bright red tick and drew a star on their notebook and watched the children’s faces flush with happiness. She smiled at them and patted their shoulders. Zubina ran to her with her notebook and said, “I have a doubt ma’am. How can we divide 57 by 513?” Simon interrupted and said, “It’s 513 divided by 57, stupid.”

“Simon, don’t call Zubina stupid.” Zubina looked hurt and was on the verge of tears. “Zubina, it is 513 divided by 57. The larger number is always on top and the smaller number is at the bottom.” She worked with Zubina till she understood the problem.

The bell rang and it was time for a break. “Please come back at 11.30. We will do English next,” said Revathi. Simon got up from his desk and helped Vijay lift Balu from his seat and place him on the wheelchair. They ensured that his feet were properly placed on the pedals and wheeled him away. As soon as they were out of Revathi’s sight they wheeled him faster and raced down the ramp pushing the wheelchair. Balu squealed with equal parts of fear and anticipation as they hit the bottom with a thud. “Do it again, do it again,” said Balu, and Vijay and Simon turned the wheelchair again and pushed it painstakingly up the ramp and the game started all over again.

Mani took Umesh by the hand and led him to the playground. The younger children crowded around Umesh and soon he was engaged in ‘hide and seek with them. Manikandan, who was chatting with his friends, kept looking in his direction from time to time and was reassured when Umesh didn’t wander away or have one of his temper tantrums.

Revathi sipped the coffee from the machine slowly, and savoured its taste as if it were made from filter decoction.

“Anu, managing an autistic child like Umesh is so difficult. Inclusiveness as a concept is interesting. But to have a class with wheelchair children, children with learning disabilities and to top it a child with autism is so difficult. I love my kids, but at times they drive me crazy.”

Anu grinned and said, “Yes, putting up with those farts and burps must be difficult.”

“I want to quit. You and I, we try so hard and don’t seem to be getting anywhere. We’ve been doing multiplication and division for weeks now and many of them are still struggling with the concepts.”

“You love your kids too much to quit. Besides you’re the best teacher in this place,” said Anu.

Revathi pulled a face and opened her mouth to say something, but was interrupted as the children entered the classroom. Umesh who repeatedly kept calling Premila a ‘fatso’ and punctuated each statement with a high-pitched squeal interrupted the English lessons. Even Revathi’s threat to call his mother didn’t quieten him. Aman got into a fight with Abdul and threw a pencil at him. Shiva wanted to go to the toilet and didn’t come back for so long that Revathi had to go in search of him. She found him standing outside the toilet singing softly to himself. When she got back to the class with Shiva, Premila and Zubina were throwing paper balls at each other and Revathi had to shout at them to stop.

Revathi was never happier to hear the lunch bell. She waited till the children and Anu had left and then walked to the staff room. The other teachers had already opened their lunch boxes. Revathi sat down but did not open hers.

“Revathi, what happened? You look very tired and stressed out,” asked Amrita, a teacher who worked with young children who had learning disabilities. “Is it Umesh?”

“It’s Umesh, Pramila, Aman, Abdul, Zubina, Balu and Vijay and… It’s just one of those days.”

Post lunch, the children engaged in a variety of extra curricular activities like art, sports, personality development and life skills to help them cope with the outside world after they graduated from school. Revathi loved working with the children in the afternoons; it gave her an opportunity to interact with the children on their own terms and learn so many things about them.

“Let’s play a game today called Hangman. I have a word in my mind. I will tell you how many letters it has. You have to guess the letters and when the word is complete, you have to tell me the meaning of the word.”

The children loved word games with Revathi. Revathi had a nine-letter word in her mind and drew equivalent blanks on the board.

“Well”, she said, “Who is going to start?” asked Revathi. 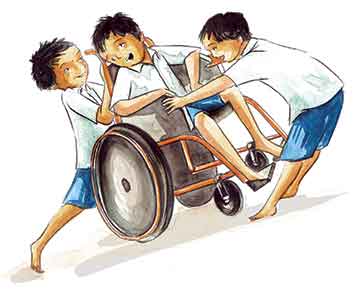 There was absolute silence, everyone was looking here and there, nobody wanted to try and then a hesitant voice was heard, “Does it have a P ma’am?” It was Jothi.

“Of course it does. In fact it has two Ps. Let me write it down.”

Jothi was thrilled about having contributed a letter that filled two spaces. Several others, now eager not to be left behind, piped in with suggestions. “An S, ma’am. What about a K ma’am I think it has an E ma’am,” said Balu, Pramila and Simon simultaneously.

“Yes, Balu, you can have your S and two of them.” Balu looked around the room proudly, making a whooping noise, his one-upmanship proudly displayed for all to see. “Simon, one E, and Pramila, I am sorry, but there is no K, better luck next time.” Pramila continued to grin and didn’t look disappointed.

“Now can anybody guess the word? Only four blanks left. Come on.” said Revathi. The children shouted out a number of letters and none was correct. Mani, who hadn’t made a suggestion as yet said, “Ma’am, I think I know the word, but I don’t know how to pronounce it. Does it start with H and I think it has an N,” said Mani hesitantly and then broke into a smile, when Revathi filled in the spaces.

“Now we need two vowels. Does anyone know which letters of the alphabet are vowels? Umesh, can you tell me?”

“AEIOU,” said Umesh, who kept repeating the letter U and pointing at Zubina who made a face and turned away from him.

“Correct. Now can anyone make a sentence with the word happiness?” The class remained silent.

“Does everyone know the meaning of happiness?” asked Revathi.

A few reluctant nods; the others looked bewildered.

“Can you make a sentence with the word happy?”

This time around, almost everyone nodded with wide smiles, as if to indicate their understanding through expression rather than oration.

“Happiness is when my mummy is happy,” said Simon. “Fantastic Simon and when is your mummy happy?” Simon thought about it and said, “When my father is not drunk and doesn’t beat her up.”

Revathi was shocked at the ‘matter of fact’ way in which Simon had spoken and filed away the information in her mind to discuss it with him at a later, more convenient time.

“Anyone else?” and several hands went up eagerly. Mani, in a sober tone said, “I am happy if I do well in my studies.”

“I am happy when I play cricket,” said Balu.

Suddenly Umesh, who was watching the children state their sentences, jumped up from his chair and said, “I am happy when I see Revathi ma’am.”

Tears suddenly welled up in Revathi’s eyes and she turned her back to the children and pretended to clean the blackboard, while she struggled to regain control over her emotions. The bell rang signalling the end of the school day and the children got up noisily and began packing their school bags. “Goodbye ma’am” they chorused, before they left the class. Revathi sat down in her chair for a moment to catch her breath and then put away the children’s notebooks and the class register in the cupboard.

“See you tomorrow, Revathi,” said her colleagues as they walked past the classroom. She straightened the benches, and lingered in the classroom for a few minutes. She walked slowly down the ramp, in a sombre mood and was startled by the sound of her cell phone. She dug around in her bag for the phone; her mood lightened when she discovered that the call was from her daughter.

The author is a volunteer at a school for children with learning disabilities and special needs. She also works with disadvantaged women from rural communities and writes about people and situations that are alternative and ‘off the grid.’ She can be reached at priya7767@yahoo.co.in.