Faculty meetings were a part of my work life when I was a middle school math teacher in Mumbai. These faculty meetings would sometimes consist of sleep-inducing administrative affairs or endless debates on new school policies. Inevitably, as soon as the meeting ended, a few of us teachers would step out to the nearby café to refresh ourselves with filter coffee. Over coffee we made sense of the meeting, recounting what different participants said, guessing the backstory and then finally agreeing on how unproductive the meeting felt. It would have been more productive, we agreed, to spend the one hour spent in the meeting in preparing lesson plans and we blamed the principal for poor planning and not keeping the participants in tow.

But blaming the principal was misplaced. Four years later,as a consultant, I worked with the same principal to plan faculty meetings. It was then that I found that the best laid plans of faculty meetings ended belly-up with teachers (and sometimes, the principal) giving the clock a forlorn look waiting for the meeting to end. The post-meeting now happened in the principal’s office where we tried to make sense of why, despite the detailed planning, the faculty meeting felt unproductive. 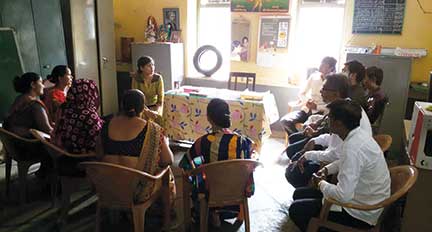 If your experience of faculty meetings aligns with the above description, you are probably hoping for a solution that will transform your faculty meetings. This is not to say that you have not tried already. You might have tried good practices: shared an agenda upfront, conducted shorter meeting “huddles”,given roles to people (e.g., facilitator, note-keeper, time-keeper, chair) and felt more in control of what happens during the meeting. Most likely though, some faculty meetings would fall apart despite following all the good practices. Don’t despair. Faculty meetings are unwieldy mechanisms with a life of their own. And looking at them from a pure functional (tool) perspective is misplaced. Says Ed, the principal who Harry Wolcott shadowed for two years and described in his book, The Man in the Principal’s Office, “It always seems to take us an hour for the first item on the agenda, no matter what it is.” (Wolcott, 1973, p. 95).

When I usually read out the above comment by Ed, I notice smiles and nods of acknowledgement from not just principals but even teachers and scholars of “meetings”. Indeed, the scholarly work on meetings as a research topic is rapidly gaining momentum. It was in the 1980s that Helen Schwartzman’s classic text, The Meeting: Gatherings in Organizations and Communities, set researchers on the exciting path to explore what some considered a boring phenomenon – the meeting. In a recently published handbook of “meeting science”, professor Schwartzman acknowledges the fine research being conducted to understand meetings as compared to the overwhelming desire to control and order these ubiquitous and routine events. Building off on that perspective, I would like to welcome you to walk with me to a different vantage point from where you might see faculty meetings as something more than just tools to take the right decisions, provide information efficiently and/or assign responsibilities to get work done.

Let me start by saying that faculty meetings are necessary. In my research with public and private schooling systems across 13 states in India, I have never seen a school thrive without faculty meetings. Why? Because faculty meetings, despite the disdain they get, perform a crucial role as sense-makers, as interconnected organization learning episodes and as political events for the school. From that perspective, faculty meetings are always productive. If they don’t feel productive, it is usually because we are seeing them through a narrow lens. So, what else do meetings do?

Sense-making in faculty meetings: Instead of paying attention (and judging) faculty meetings by whether specific issues were discussed or decisions reached, shift your attention to how meaning/sense is made in faculty meetings. It is during such meetings that people often make sense of who they are and what their school is all about. Theories like Karl Weick’s Sense-making contend that the future context isn’t out there, we act into it usually through talk. Put another way, the school issues aren’t something out there but rather made real and meaningful through the faculty meeting conversations. That might seem counter-intuitive at first but the more one thinks about it, the more one begins to notice how what is defined as the problem changes with who is present in a meeting and where the meeting is held.

Let me give an example from my current research spanning across two government schools in Mumbai. In both the schools, I found that students often walk in the school corridor during teaching hours. However, in the faculty meeting at one of the schools, the principal’s mention of students walking around in the corridor during school hours was talked into a discipline “problem” and the teachers and principal acted into their role as discipline keepers. But guess what? In the other school, students walking in the corridor was never mentioned (made into a problem) during the faculty meeting. In other words, the events that faculty meetings are about are more like processes of inventions than discovery!

Focusing on sense-making provides valuable insights about the assumptions that the teachers and the principal might hold about important topics (e.g., school discipline). Although a lot of meeting improvement literature emphasizes what needs to be talked during meetings and how to keep focused on the agenda, it is sometimes more useful to focus on what could have been discussed, but wasn’t and why. Argyris and Schön, in their work on organizational learning, provide examples of principal-teacher meetings which encourage meeting participants to notice and question their implicit assumptions, a phenomenon they call as double-loop learning.

The easiest way, I would suggest, to see both sense-making and organizational learning in action is to attend the faculty meeting at a couple of other schools. We often take the conduct of our faculty meetings as “natural” when it actually is a socially constructed event. 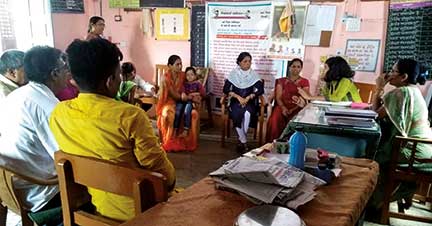 Faculty meetings connect to other meetings through their participants and the documents created/shared during the meeting. It is quite common for an idea circulated at a faculty meeting with middle school teachers to appear in a subsequent meeting with high school teachers from the same school. Why? Because some teachers (and the principal, of course) are common participants in both the meetings. A closer look might even reveal how the faculty construct “absent” participants (e.g., the student). In the government schools, for instance, I often notice that faculty meetings tend to construct a “helpless children” image of the students while international school faculty meetings tend to lean towards a “customer” image of students which get constituted and reinforced in the various other meetings that teachers and principals have with parents and school boards.

Faculty meetings evolve through time too. While most people tend to use meeting minutes as an accountability mechanism or an audit tool, a careful analysis of the minutes across the last six months can give insights into the kind of professional knowledge that is being created, retained and transferred. In my current research with the government schools, faculty meeting topics shift considerably every month (scrap-removal, assessment planning, scholarship exams) – highlighting how the schools are forced to shift gears directing all energy from one task to another. The lack of sustained focus on one instructional strategy does not allow knowledge and expertise to develop.

Gossip within faculty meetings: Given the present focus on staff room politics, faculty meetings enact and (re)produce politics, often through the use of gossip. Although faculty meetings are themselves illustrations of political power (e.g., who called the meeting, who controls the duration, who prepares the agenda), the taken-for-granted gossip that happens in faculty meetings and beyond illustrates the micro-politics of power. In a research based on videos of staff meetings, authors Hallett, Harger, and Eder (2009) show that gossip isn’t either good or bad, rather a careful study of this unsanctioned talk at the faculty meeting tells you about what unofficial information is being developed and shared and whose reputation is being evaluated and why.

Combining the power of gossip with the elements of sense-making and interconnections, it is possible to notice how gossip constructs professional identity of specific people in the school and how that construction travels to other meetings.

To conclude, faculty meetings, both as a single episode and as a collective, are important to sense-making, organizational learning and staff room politics. The efforts to control these meetings are led by an instrumental focus on getting things done through meetings, which can feel unproductive. This is not to say that the instrumental focus is wrong and shouldn’t be followed; rather the idea here is that it is helpful to consider that faculty meetings are already productive of sense-making, organizational learning and politics; therefore, instead of judging them, we can learn from what they have to teach us.

Meeting duration: Begin and end meetings on time. Replace some of the lengthy faculty meetings with “huddles”. Done every morning at the same time with the same group of teachers, these short 10-15 minute discussions are based on a focused agenda and tightly facilitated with talk-time on specific questions like:
• What was your key accomplishment yesterday?
• What is the biggest challenge/concern that you have? How do you plan to address it today?
• How are the preparations going for the PTA/Annual Day/Exams coming up?

Meeting design: Prepare an agenda and send it at least 24 hours before the faculty meeting. Also, assign roles to people (chair; facilitator; note-taker; time-keeper) to make sure the faculty meeting is largely on track. Putting a chart up with what these roles look like in action helps.

Meeting comfort: Be mindful of physical infrastructure like room temperature, availability of water/snacks and seating comfort. Sit in the space 5 minutes before the meeting and see how comfortable it feels.

Meeting composition: Invite only those teachers and staff who are necessary for the discussion.

The author is a PhD scholar at the University of Virginia. He is currently finishing his dissertation on how meetings of the principal shape school knowledge. When he is not working, he is often found practicing improv theatre, hiking in the mountains and saying “Yes and” to whatever life brings up. He can be reached at gopalmidha@gmail.com.

A room where no one hears the bell
The staff room: Sanctuary or stressor?