‘Whatever the learned practice, is followed by the other folks and
Whatever standards are set (by their practice), the world adopts.’
(our rendition of Bhagavad Gita, 3: 21)

Realizing the importance of education for social revolution, Mahatma Gandhi, the implementationalist, envisioned an educational system called nai talim or basic education for a new India that integrates education and practice of socially useful productive work (SUPW). In reality, institutions failed to correlate productive activities with the school curriculum, in the spirit of nai talim. Instead, a new stream of vocational schools was pushed as an alternative to mainstream schooling. Simultaneously, SUPW was suggested (by NCERT) as a co/extra-curricular activity in mainstream schools of CBSE/state boards, primarily as a token of respect to Gandhiji. The seriousness given to the suggested SUPW in mainstream schools (including the ones run/funded by government) is best illustrated by this sarcastic comment, ‘Some Useful Periods Wasted’.

The twin streams seem to have resulted in a terrible scenario: 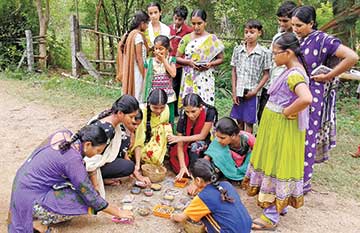 New strategy for nai talim
We present a new strategy for achieving the true potential of the spirit of nai talim, thus addressing the above unfortunate scenario. It is based on our experience at the Haritha Ecological Institute, (Palvancha, Khammam district, Telanagana) in using several SUPW mostly with local renewable resources, such as in gardening, vermicomposting, kitchen, food processing using bicycle grinders, etc., with several day-to-day activities, as experiments to illustrate important concepts in the mainstream school curriculum.(1,2)

It envisages empowering entrepreneurs to undertake SUPW in the school, where students and teachers work for an hour or so and get paid. For the students, teachers and the school, these productive activities, besides giving extra income, become experiments/projects to understand and explore concepts in the existing mainstream school curriculum and provide an ideal way for the Continuous and Comprehensive Evaluation (CCE) of the project method.

The process transforms the school from a mere teaching (memorizing) shop to a hub of activities with technology demonstration by practice, dissemination, and community enrichment by inculcating the dignity of labour, spirit of critical observation together with an entrepreneurial zeal and above all, a healthy respect for different opinions that forms the core of modern democracy. The latter stems from the fact that students need to work in teams and deliver in real time.

The SUPW by way of micro-enterprises that use local renewable resources, set in natural surroundings, with an emphasis on sustainability, would be ideal: the process eventually brings back the most important part of Indian tradition, namely a reverence for nature that provides the renewable resources and the need to preserve the environment to sustain the same, where one finds peace by living in harmony with nature. 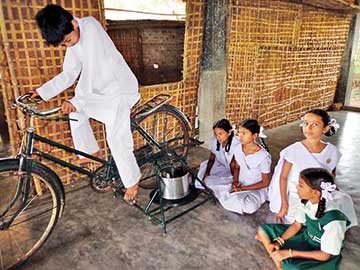 This new strategy gives an opportunity for the learned in the academic field or in industry/business to mentor enthusiastic entrepreneurs to ‘explore through practice’ of the much needed green technologies within the current market/economic forces, but in ethically and legally valid ways: the gap funding enables the learned to pursue the productive activities without attachment, for the good of the society, while the entrepreneur may be a willing collaborator ‘with attachment’ (… read ‘to ultimately achieve economic success in the market’), with the productive activities. Setting modern scientific and engineering standards through self-practice aiming at sustainability, for the larger society to follow, would be a challenge for the learned of the elite institutions. It is only then that ‘professors’ can truly be called ‘aachaaryaas’, in the Indian tradition.

The resources needed to gap fund the micro-enterprises within the school premises may be sought from corporations (as CSR) and NGOs and also from public funding. The rate of decrease in the gap funding can itself be one of the best measurable indices for assessing the efficacy/outcome of education, not only of the schools, but also of elite higher academic institutions: the other being the rate of decrease in the deficit in the needs of the local community, to be met from non-green technologies requiring non-renewable inputs.

The likely impact
Human values – dignity of labour: Carrying out any ‘socially useful productive work’ (SUPW) by the teachers and students imbibes, through regular practice, several values, including the most cherished one, and that which is sadly missing in our society, namely the dignity of labour. Moral classes by storytelling or texts are a poor substitute at best.

Respect democratic values: It develops a healthy respect for a different opinion that forms the core of modern democracy. Students need to work in teams and deliver in real time. And often, the student teams have to choose one among the many possibilities that are not amenable to any engineering optimisation criteria. For example, it is almost impossible to decide any particular combination of vegetables to be grown in a given small plot of land as the best.

The road map
Almost all the productive works that are tried out have been found to be rich with all other essential ingredients in child pedagogy: fun, useful, practical and offer great scope for critical observation and learning. Further, these are not just cost effective: these actually provide an avenue for income/resource generation, even if nominally, to the students, teachers, and the school. 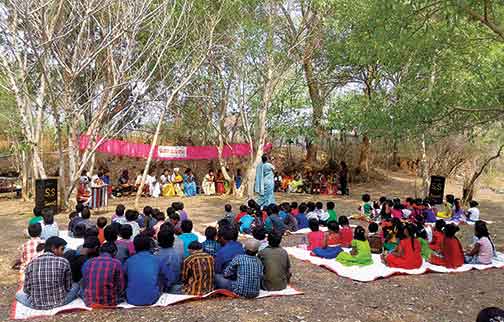 The micro-enterprises are to be operated by professional entrepreneurs, right in the school, where the student teams led by a teacher work as per schedule, without affecting the economics of the unit. This is the hindsight gained from our failed efforts of the teacher- led entrepreneurship of micro enterprises, such as vermicomposting and honey bee keeping.

One SUPW involving the elderly and child care that includes (curative) yoga, has not been tried but is one area that is unique in several ways:

Conclusion
There is an unlimited scope for extending the range of SUPW by way of local renewable resources based micro-enterprises simultaneously expanding the scope of the concepts that can be understood/explored with regular ‘hands on’ work, becoming experiments. This is an area that richly deserves the focus of researchers in the pedagogy of education and sustainable development.

As an example, the above diagram illustrates the new strategy, where the school is the hub of nearly six micro-enterprises that do their bit in making the school and possibly the community nearly self-sufficient in the four basic sectors: water, food, shelter, and energy, mostly from the local renewable resources.3

Haritha is not an individual. Haritha is an idea… a way of education. Even though it began in 1988, it got registered as a society, “Haritha Association for Learning from Environment (HALE)” in 1992. All classes up to Intermediate (Class 12) were functional till 1999. The efforts in school education were limited to class 10 ever since.

What finally took shape was a variant of nai talim. 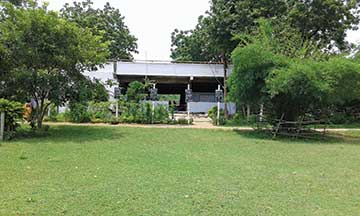 The new approach that Haritha adopted was that productive activities should be correlated to modern school education and be made a part of it and that these activities, remunerative or otherwise should not be viewed as extra curricular activities, but must be brought into mainstream school education.

This mainstream school soon becomes a hub of technology and provides a spirit of enquiry that enables the school to earn to meet its expenses (at least partly). It empowers the local community by providing a livelihood for them and becomes the centre of the community.

The journey, thus far of Haritha has been experimental. For it to remain either as a role model or become firmly established, two things are needed:

These micro-enterprises are school laboratories where everyday, students work for an hour or so. Teachers work for about three to four hours. Some of the other community members work full time for their livelihood. Students try to observe, in what they do, the concepts they read about in text books/class rooms. Teachers try to correlate the work they do to the lessons they teach. Entrepreneurs scale up the technologies in the community, successfully.

The income from the productive activities of the micro-enterprises is used for students, teachers and maintenance and enhancing the school activities. In this educational method there is sustained/happiness, bubbling activity, spirit of investigation, creativity, drive for self sufficiency and self respect, responsibility, dignity of labour, respect for democratic values and development of personality.

Satya Teertha is a research scholar at Acharya Nagarjuna University. He can be reached at harithavaranam@gmail.com.