Satish and Nitin are packing up after school. Today they had worked on solving triangular arithmagons*. Nitin is happy; he had made progress in the hour, coming up with the equation ‘2 x (sum of the vertex numbers) = sum of the numbers assigned to the sides’. He’d been asked to check this for quadrilateral arithmagons.
Satish eggs him on, saying, “Nee oru formula-veh kandu pudikkalaam da!”
“You can create your own formula, man!”

Mathematical explorations are mathematical activities around open-ended and loosely-defined problems that involve students asking their own questions, choosing the ones that interest them, following different paths to find answers and asking more questions. Key to the experience is the freedom to explore different approaches and students gaining a sense of ownership in creating mathematics.

For the past seven months, I had been observing Satish, Nitin and other 9th graders from two State Board schools navigate through mathematical explorations for an hour or two every week, as part of a research study. My primary task was to observe how students approached the problem posed; what they said, or did and note that down in an unbiased way, akin to a birdwatcher observing species in their natural habitat. However, what started as merely a documentation exercise, turned out to reveal fascinating things about student thinking and behaviour through these sessions. Here’s capturing some of those interesting realizations and what they mean to me.

Math doesn’t have to be scary
Class begins after regular school hours and as we step in, Prashant throws in a jovial, “Inikki enna panna poroam ma’am?”, loosely translating to, ‘What are we doing today, ma’am?’ ‘Let’s do something new!’ He shows no signs of fear or boredom. The class starts with a simple question, something all students can easily access. ‘Think of your age, then add 2, multiply by 4, divide by 2, subtract 3. What do you get?’ Prashant shares his final answer and we guess his age correctly. Curiosity sparks!

Students are now creating their own ‘magic number puzzles’. Everyone is working at their own pace and spending the time to figure out how to guess their friend’s age. A follow-up question enters the mix to nudge them out of their comfort zone: ‘How many different puzzles can you create where the answer is exactly 5, 21, 79, or any other given number?’ Students are now playing around with the combinations. All variations are welcome.

‘Now, modify the puzzle so that the answer is the number that you thought of.’ As the class thinks of ways to return to the same number, Nisha gives it a name: ‘loop’. It sticks, and soon there are a flurry of loops.

Six months later, when you’d think that students would have forgotten this exercise, Nisha confronts us with an example of a loop she came across elsewhere. Watching her eyes light up as she made the connection to a class that happened quite a while ago, I think of how when students are given the freedom to work things out in their own way, there is joy and ownership. And when they do eventually discover or create something, it stays with them for a long time.

Think like a mathematician
Today, a clapping game is underway. Fifteen students sit in a circle and clap as instructed: every 3rd person claps, every 4th person and so on. They notice that if the student who starts the game, claps a second time before all of them have clapped, then the cycle repeats with only a select few clapping. They see this happen when every 3rd or 5th person claps; but when the 2nd or 4th person claps, all 15 students clap. Now they wonder, ‘When exactly will everyone get to clap?’

Guided by the case where every 3rd and 5th person claps, Akshay makes a guess, “15 is odd, so if every odd numbered person claps, then all will not get to clap.” By this logic not everyone should clap if every 7th person claps. They try it out and Akshay is proven wrong; everyone claps! More guesses emerge – ‘3 and 5 are factors of 15; so if every 3rd or 5th person claps, everyone won’t clap’. This is sufficient to explain the anomaly in Akshay’s guess. However, as students test for every 9th and 10th person, expecting everyone to clap, they find that they have to reject their second guess as well. Even though 9 and 10 are not factors of 15, only a few get to clap.

They now move from actual clapping to calling out numbers; if every 3rd person claps in a group of 18, then the 3rd, 6th, 9th, 12th, 15th and 18th person will repeatedly clap. The mathematization gives them the flexibility to try out more cases without physically clapping, and with more trials and guesses, they try to find a rule. We see them come up with a conjecture, test it out, discard it if false, revise and verify it again, till it works for all the examples. Perhaps due to a lack of fluency in mathematical language, they are unable to prove their conjecture or succinctly express the condition when everyone would clap. But they definitely know the rule and how it works. They tackled an unfamiliar problem and worked like mathematicians to solve it. 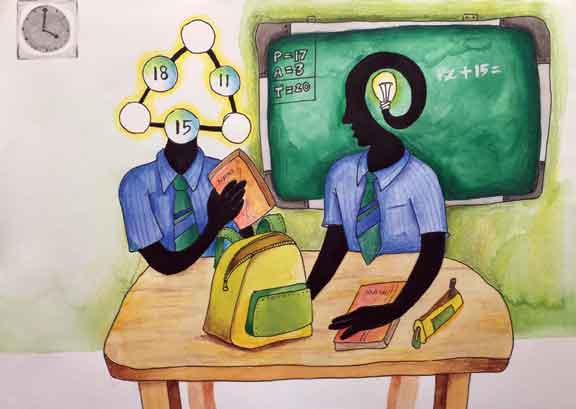 ‘Multiply apple twice to get orange’
Not everything is rosy though, in this experience. We encountered some serious roadblocks to progress. Having usually solved problems where conditions are ‘fixed’ or given, students are habituated to look only for enough parameters to plug into a formula. This came out starkly when we asked students who were quite familiar with the set identity

for the total number of students in a class; where 20 students played football (A), 30 played cricket (B) and 25 played both games (A and B). Ranjith confidently answers, “There are totally 25 students in the class.” No other student objects. Even though the answer (25) is procedurally valid, it does not occur to anyone that it’s impossible for a class to have 25 students playing both cricket and football, when there are 20 students who play football alone.

One of the more troubling realizations we had was that students tended to interpret algebraic expressions in terms of values and operations (‘textbook talk’) rather than its intended meaning. If P were number of apples and Q were number of oranges, what does 2P=Q mean? Shruti blurts out, “Multiply apple twice to get orange,” which doesn’t make much sense.

Despite the disconnect with the context of the problems, there were surprises too. For instance, in the fruit problem, the ‘textbook talk’ did not seem to extend to the equation where the idea of money was involved. If x was the price of an apple and y, the price of an orange, what would Px+15=50 mean? Prashant responds instantly, “I bought apples for 35 rupees.”

Now we’ve got questions to think about. Why was Px+15=50 so easily interpreted? How did students connect the value 15 to money and not fruit quantity? We noticed that even a slight change in the context or framing of a problem, drastically changes student response.

For instance, in the clapping game, we had started by telling students to clap by ‘skipping 2’ persons…, which didn’t help them to ‘see’ the number 3 as a factor of 15. In the subsequent runs, we amended our framing accordingly to ‘every 3rd person claps… etc. Finding the appropriate context for students to connect to, and the right framing that gets the best out of them has been an ongoing challenge.

Reflections of an educator
Having worked with students in schools where lessons are time-bound, procedure heavy and the ‘right’ answer is valued more than the question; it’s not hard to see how students often lose themselves in repetitive practice drills without fully understanding the purpose of the subject.

In contrast, explorations are inquiry based and student centric, where teachers facilitate and give inputs only when absolutely necessary. Doubts, misconceptions are often addressed by peers themselves. Student thinking is made visible. Varied mathematical approaches are encouraged and questions eagerly welcomed. There is immense scope for students to build abstraction, analytical thinking and problem solving capacities.

Each time I reflect on my observations, I notice how in an exploratory classroom, students’ responses directly feed back into pedagogy, allowing one to alter their instructional course as needed. Unlike in a drill-practice centred lesson, kinks in lesson planning or execution are glaringly visible (think ‘skipping 2 people’). Conceptual breakdowns and logic gaps in students are relatively clearer (‘textbook talk’) and therefore easy to remediate.

My hope is for more educators to take mathematical explorations to their classrooms and unleash the potential of a different, joyful and more authentic learning experience for students. It is without hesitation when I say that this has been a captivating and enlightening journey for me as well, for along with the students, I have become an explorer too!

*Arithmagons are puzzles where one has to find the unknown numbers at the vertices of a polygon, given the sum of the numbers along each side.

Student names have been changed in the article.

The author is a former fellow at Teach for India. She can be reached at vinusha.v2017@teachforindia.org.