A typical scene in a grade 6 classroom of an English medium school.

A student was speaking in Hindi with his friends. Some of his fellow classmates complain to teacher about this. The teacher reprimands the student and praises those who report him.

“Don’t’ you know this is an English medium school? You can’t talk in Hindi here.”
“If you want to talk in Hindi go to a Hindi medium School.”
“Next time I should not catch you talking in Hindi.”
“A fine of Rs 10 is to be paid tomorrow for speaking in Hindi.”

The student is made to pay for a grave crime while the other students take this as a lesson. The students who complained are pleased at having accomplished the great job of keeping intact the prestige of the greatest language of our country – English. The victim student is confused. Isn’t Hindi the most common, comforting language spoken and understood by the largest majority of people in the country? Doesn’t this language bind us more than English?

Why are schools so stuck on speaking only in English? Even informal communication between students is scrutinized. Students are forbidden to use Hindi or any mother tongue in school. On being caught deferring this commandment, they are made to feel as if they have committed a crime. The fear psychosis associated with these languages sets in these young minds. The education systems are to be blamed if these young minds soon develop pseudo beliefs that those who speak English only are worthy and those not fluent in this language are to be looked down upon. This infamous and spiteful legacy is deep rooted in our systems even though the perpetuators of English language have long left us to breathe independently and decide for ourselves as a nation. 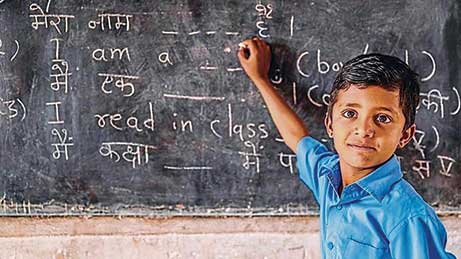 True that the education system has radically transformed itself, having moved on from rote learning to inquiry and constructivism. Inclusion Of All, Celebrating Diversity and Education For All are the new mantras. How are we then viewing this inclusion? Isn’t language a unique feature of the Indian culture and isn’t diversity owing to languages also to be given a serious thought when we proclaim education systems to be all inclusive.

What a farce in the name of multiple intelligence which is the word used so often to symbolize the paradigm shift in education! The superficial and bookish understanding of linguistic intelligence which is one of the multiple intelligences is evident. Anyone with a predominantly developed linguistic intelligence can savour words and are quick at learning and expressing through any language. In a heterogeneous class, though the intelligences that students possess vary on a large spectrum, schools still insist on everyone becoming proficient in a particular language as the only means of expression. Even after teaching the same way, each student grasps language and develops understanding in his or her own way. It’s not language usage but the meaningful expression that it carries which is important. For that matter, even sign language conveys a lot.

For the young innocent mind, the seed of shame associated with using Hindi or any mother tongue has been sowed deliberately by the unthinking education system.

Of course in this competitive world there is absolutely no denying that knowing English is a must, yet why does the system dwell on the belief that speaking in other languages within school premises would hinder the grasp of English? A young mind models itself after the teachers and how they use language to express the information in a most relevant manner. Wouldn’t a student grasp the language? Is fear and insistence to speak the only ways of learning a language? In hindsight, one cannot blame the school alone as one cannot overlook the obvious fact that parents get attracted to schools where students walk around talking in English. The look of pride on teachers and parents’ faces when a pre-primary kid expresses himself in English says it all. The only escape route for students is to not get caught using a language other than English. ‘Caught’ – such a ghastly word to be used in centres of learning. Think about it.

The author is Assistant Professor at K J Somaiya College of Education. Her areas of expertise are dialogic teaching, diversity and multicultural education, microagression in classrooms and new trends in pedagogy. She can be reached at pooja.birwatkar@somaiya.edu.