Posters slapped on the walls and on every blank surface of the city or town; strident slogan shouters in cars, trucks, tempo vans and every possible moving vehicle carrying loudspeakers, posters, demonstrators; thousands of people converging in open spaces to listen to candidates or their supporters making thundering speeches – the scene is indicative of the forthcoming elections. What are elections? Elections give citizens the right to choose their own government. 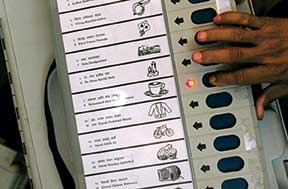 India is a parliamentary democracy. One of the features of a democracy is the right to vote, to be a participant in the forming of the government. By exercising the right to vote, every person over 18 on the basis of universal adult franchise has elected a representative to the government. An electorate is the collective term for people eligible to vote. India has a federal government. The country is divided into 29 states for easier governance. In 2009, with an electorate (number of voters eligible to vote) of 714 million people, India held one of the largest democratic elections in the world.

Since all the people eligible to vote have an equal voice in an election, each State is divided into constituencies – areas with equal units of population. The number of seats in the Lok Sabha sent from each State will be in proportion to its population. Each constituency sends one representative to the Lok Sabha. In this way a State with a larger population has more representatives to the Union Government than states with smaller populations. Thus, the ratio of the population to one seat is roughly the same in all the constituencies throughout the country. The country has been divided into 543 constituencies. The boundaries of each constituency are reviewed every 10 years by the Election Commission of India and the size is changed if necessary.

The Indian Constitution requires us to hold elections to the Lok Sabha (lower house of the parliament of India) every five years, or whenever Parliament is dissolved by the President of India because of a no confidence vote. The majority in parliament vote the existing government out.

The process of voting
It is Election Day. Voters join the queue at the polling station. As they enter the voting area their names are checked against the voter’s list. Any one under 18 cannot vote.

The author has been a teacher for nearly 40 years and has taught English and Social Studies at the middle school level as well as Economics and History at the high school level. She has also compiled a series of readers and workbooks. Currently, along with others she trains teachers for municipal schools run by Muktangan, an NGO. She can be reached at rohini.oomman@gmail.com.