Climate change, air pollution, water pollution, deforestation are all unfortunate realities of the world we live in and a starker reality of the world we are leaving behind for our children. So when I was asked by a local school to develop stories for kindergartners that would speak specifically to these topics, my initial reaction was one of excitement mixed with reserve. Excitement because the environment has been an increasing concern of mine over the recent past and reserve because of the young age of the audience I would have to address.

The entire experience however was an exhilarating one highlighted by the delightful interactions with these young listeners.

I had been given fairly specific themes for each of the sessions, giving me a framework to work within. A story format would clearly work best with 4-5 year old children – delivering the message in a subtler, more entertaining manner than a discourse on serious global issues. So that decided, I moved on to researching each of the topics to narrow down on the concepts that I could include in each story. My research included a search for similar stories already written for children, television series on the issues as well as a fairly extensive internet search.

Having completed the research, I developed each story, using animal characters along with little children as the central characters. While I did in fact create and develop a character of a polar bear for one of the stories, I used well-loved characters from popular Disney animation films for the other stories – characters that the children were already familiar with and so would draw an interest and enthusiasm from the children right from the beginning. For instance, for a story talking about water pollution, I used Nemo the fish as a central character while I used Zazu the bird for a story on air pollution and so on. 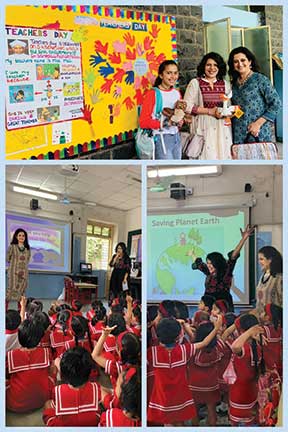 Each story was written in a conversational manner peppered with some humour. The conversations in the stories were between the central animal character and a 4-5 year old child talking about issues of pollution, global warming and most importantly conversations on small changes that each of us can make in our lives for a greater collective positive difference in the environment around us. The idea behind the conversational format was to enable interaction with the children in the classroom by drawing them into a conversation with the characters in the story – making the issues all the more real for them.

Talking about visualizing the stories, we used some props such as stuffed animals for the characters. This was exciting for the children and also added a sensory element of touch to the stories where children were able to touch the fur of the polar bear, or shake hands with the fish and so on – bringing the characters to life.

We also created short animations through PowerPoint presentations that were projected on the screen in the classroom. So, for example, a jungle scene in the story was depicted visually on the screen with animated jungle animals along with sound effects.

Apart from the visual presentation of the stories, I tried to make concepts in each story more relatable for these young children. I talked about global warming as a consequence of too many ‘blankets’ of ‘harmful gases’ wrapping the earth – the visual being a perspiring earth; we spoke of carbon footprint as muddy footprints following us after a day out in the dirt and so on.

And our trump card in the stories was really the inclusion of a short song/rhyme that reiterated some action points that each of us can include in our daily lives for a positive change in our environment. The song really resonated with the children. We also further involved the children with an enactment of the song so that each child took the song back with them as they returned home at the end of the school day.

All in all, I believe it was the entire package that helped in delivering the message to the children.

Resources for teachers: For this set of stories, I did a lot of research from videos I found online especially the series called Our Planet by David Attenborough. Also, www.ducksters.com is a great website with informational material for children.

The author is a mother of two girls and lives in Pune. She has been conducting various workshops for children along with a friend for the past several years. She can be reached at [email protected].