In “India’s Crafts: Crisis and Opportunities”, economist and crafts activist Ashoke Chatterjee asks, “What Indian industry offers employment to millions …is primarily based in rural locations, has immense export potential…and a low carbon footprint, contributes competitive skills to a large number of key industries and offers a huge social and political safety net?” The obvious answer is the country’s huge traditional art and crafts industry, comprising a workforce of some 40 million artisans (some estimates put the number at 100 million) “who are talented, skilful, inventive, and often entrepreneuria, and who represent a culture that is natural, not self conscious” – and who live largely off the land. 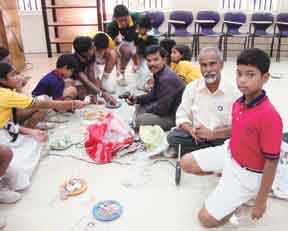 India’s traditional art and craft industry is the biggest employer in the unorganized sector, after agriculture. It is linked, as it has been through the centuries and millennia, with our civilizational expressions, be it dress, lifestyle products both decorative and utilitarian, and with our ritual and religion. India’s textile jewellery and gems traversed ancient trade routes from pre-history to Greek and Roman times, from the Silk Route’s historic pathways to the medieval pre-colonial and Colonial eras. Foreign travellers from Megasthenes (Circa 5th BCE) to Chinese Buddhist traveller Huen Tsang (Circa 6th AD) to Ibn Batuta in the 12th century and Bernier and Tavernier in the 18th century have written about the superb textiles , jewellery, and hand crafts of the country and the brisk trading in them which went on in the streets and bazaars of the cities. It would seem that then, as now, handicrafts played a pivotal role as economy drivers. Today, handicrafts form the biggest single export earner at Rs.7,000 crores. According to Liebel and Roy, authors of “Handmade in India” (2010), the early post liberalization period saw the greatest spurt in the export of handmade textile and products.

The seeds of this growth can logically be traced to the proactive post-Independence government policy, which not only saw the setting up of a nodal Handloom and Handicrafts Ministry that oversaw the growth of handicrafts and handlooms, but also led to the setting up of state handicraft emporia, the Central Cottage Industries Emporium, an actively pursued export trade and the holding of marketing events such as craft fairs, melas, haats, etc., sponsored by the government. The various Festivals of India in the 80s and 90s created awareness of our craft internationally, while the various State and National Awards, the Shilp Guru Award, etc., gave a further fillip to the status of artisans. The setting up of self help artisanal groups, design, and development training programmes and wide spread work by NGOs are other landmarks in the growth of the crafts sector. However, ultimately the growth has been driven by the skills of the Indian artisan with his inherent strength to create, innovate, evolve, and endure. 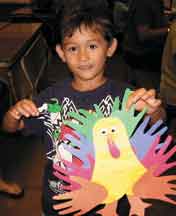 In a state of crisis
To sustain is to endure, which is what India’s crafts have done through 5000 years. So does traditional Indian art and craft need external inputs to help it sustain, endure and survive? The answer is yes. India’s crafts are facing a crisis today. Many craftsmen are leaving their hereditary vocations faced by diminishing markets or the lure of jobs in urban centres. The spread of education among the younger generation is another factor that fuels this phenomenon. Many crafts have begun to languish or have totally disappeared due to changing lifestyles. The consumer culture plays a role in the disconnect of the artisan with his trade as is his perceived lack of status in society. The very perception of craft itself is often seen as purely a part of market economy, based on its marketability, profits and financial survival. However, another view held by many sociologists, anthropologists, and economists veers towards seeing hand work as part of cultural economics, and intrinsic part of the fabric of the community, which goes beyond monetary value. The UN Report of the World Commission on Culture and Development has called culture along with its products the “soul of development”. And according to Richard Sennet, working with one’s hands builds moral character, a learning of social skills and problem solving techniques. Needless to say, both the ‘monetary’ and the ‘cultural’ values are intrinsic to defining handicrafts.

Craft education in schools
Perhaps ensuring sustainability of hand crafts could start with education. The introduction of craft education in schools will not only teach children invaluable hand skills, but build character and expose them to an understanding of its green processes. The introduction of craft education in the syllabus of classes 11 and 12 by the NCERT is a significant step in sensitizing children to handwork and creativity. Scholarships and incentives for children of traditional artisans is another avenue that is being increasingly explored. One could also tap into the deep-rooted knowledge and skills of the artisanal community as teachers at premier institutions like NIFT, IRMA, etc. They could also work with industry clusters in research and development. In fact, Tanishq and Titan represent one such success story, in which master artisan skills have been at the heart of the design and manufacture of precious jewellery and watches. 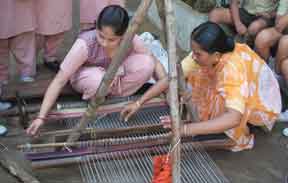 In another success story, ISRO has utilized the skills of Kerala’s bell metal artisans in the area of nanotech solutions, where science and technology had failed to provide answers. Design teaching by artisans at NID (National Institute of Design) has resulted in a large range of product development. All these case studies should be studied academically and taught in IIMs and MBA courses. Innovation, trust, and information sharing is the key to ensuring sustainable craft growth. Over a period of time, technology and design inputs have sustained a large number of crafts. However, intervention has to be done with sensitivity, taking the artisans’ viewpoints and empowering them by making them partners in the decision-making process be it in the area of design, product development, or marketing. The artisan is a natural innovator and has to be taken alongside the designer in any journey of transition. Equally important is information sharing with the primary producers, the artisans. Government attention is export centric and focussed on increasing trade opportunities. Yet, the artisan remains largely uninformed about the demand of his goods and has no control over marketing information. There is, to quote a leading economist, “vastly asymmetric information as well as asymmetric capabilities between the artisan and market operations.” Both government and NGOs should set this asymmetry right by spreading information from cluster to cluster.

Educating the customer on the deep relevance of hand crafts, its eco-friendly processes, its heritage and humane value is yet another important area which government NGOs and the media should work on. With ecology and environmental awareness fast gaining ground, the green factor inherent in crafts should be emphasized. If every ‘tea kadai’ and ‘dhaba’ across the country carries relevant posters, hand crafts could get a tremendous boost.

A synergy between government policy, NGO involvement, and individual entrepreneurship is what is driving the craft movement forward today. Plus, the passion and commitment of the artisan whose skills will take hand crafts into the streets of the future. We should all walk alongside him for the survival of craft and a value-based life.

Learning from the artisan 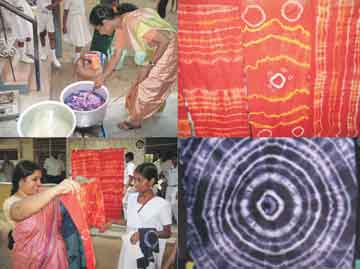 Craft is perhaps the most natural subject to teach children since every child reacts with happiness to colour and texture, flowers, birds butterflies and trees, the shape of the clouds and the stars in the sky…………… Who hasn’t experienced a child’s pure joy in making mud pies and sand sculpture, dolls out of poppy flower and boats and kites out of paper? From nature study walks at age 6 to environmental science at 12, 13 and 14 is a process of transition and assimilation by the child. It is also perhaps the right time to expose the child to fashioning shapes, dolls, objects and movement out of nature’s bounty and every day organic materials such as paper, mud, wood, stone etc, . For the older child, the thrill of creativity can be combined with lessons on the preseveration of the environment and the eco-friendly and organic nature of crafts. Craft should be taught as a holistic discipline in history, culture, the environment and design.

A child of 12-14 is definitely ready to create in the serious sense of the word. The World Crafts Council, an international NGO working for the cause of craftspersons worldwide has already launched a programme of teaching traditional crafts to children from ages 12-16 in Chennai. The craft lessons are hands on classes where master craftspersons teach the children from primary source to the end product. According to Ms. Usha Krishna, President WCC, “Our aim is to sensitise children to our traditional arts and crafts so that they appreciate not just the craft and its processes but the artisans who create them. They learn from the artisan, apart from craft, stories about their lives and environment and the deep relevance of handicrafts which are at once about history, geography, culture creativity, environmental preservation and economics”.

Teachers could prepare short interlinked lessons on the cultural, historical eco-friendly, organic and creative aspects of particular crafts. Field trips could be organized to the source of raw materials. Lessons in vegetable dyes could include the actual making of the dyes by the artisan and the student. Modern science and technology, interiors architecture and town planning could be linked in the lessons to the relevance of handcraft bringing it into the ambit of contemporary life. The inclusion of crafts in the NCERT syllabus of classes 11 and 12 is a wonderful step in making crafts part of the education of our children.

The author is a post-graduate in history from Delhi University. She has travelled to remote corners of India and studied the culture and craft of many tribal communities of the North-East. An erstwhile copywriter for Hindustan Thompson, she has contributed articles to The Hindu, Deccan Herald, Maharashtra Herald, Shillong Times and Indian Express on craft and culture. She can be reached at aratichari@gmail.com.