It is morning and the ubiquitous uniform in different colours, forms, and sizes is visible on the roads, in buses, and institutions. The definite swagger in the gait of some students embodies their pride in their school while the ever-so-slightly hunched look on others reflects a certain dissatisfaction with their uniform.

We all remember the ‘with it’ girls with their rolled down socks and hitched up skirts with a group of boys strutting around school while most of us ‘nerdy types’ were the epitome of a correct uniform with pulled up socks and below the knee skirts, our ties knotted to perfection and hair in neat braids. How we managed to look so cool even while in uniform has always been a mystery to me.

While the uniform was supposed to paint all students in one colour and give an equal platform to all, the students somehow managed to make it a style statement.

Some time ago an advertisement about wall paints carried a tag line (“mera waala cream”) which translated into every person getting exactly their choice of shade in every possible colour. I remember all possible shades of the navy blue of my school skirt, because of excessive washing, ironing, a different fabric, drying in the sun/shade, etc. So, despite being a uniform, there was no uniformity. The lengths also told various tales – the length of the uniform/skirt nearly touching the calves meant it was to preserve the modesty of the girl student or was it to take care of growth spurts and thus last longer? Was that girl wearing a short skirt intentionally hitching up her skirt or was there an economic reason of being unable to afford a new one? It might sound strange but today when I think of it, it seems to be a valid concern.

While the uniform may take away the pressure of wearing different clothes every day, the often washed and hand-me-down uniforms of some students who had older siblings in school contrasted sharply against the creased and new uniforms of other students and told their own stories and set apart the students to some extent. 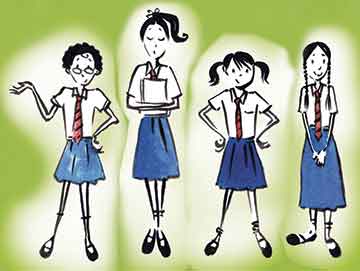 In a country like ours it is essential that the financial disparity be balanced out as much as possible, never mind the unspoken discrimination that might still occur. At least the students then have a fighting chance to be treated as equals. In a uniform, a child can focus on study and learning as the very important business of comparing clothes against the latest fashion trends becomes null and void. What is left to do in school then except maybe, uh, study!

Teachers are human and humans have weaknesses. A niftily dressed student would catch their eye more than an ordinary clad form and here a uniform comes in as an equalizer and then it’s the intelligence and participation by a child that comes to the fore.

I have experienced uniforms as a student, as a mother and as an enforcer of the same in different stages of my life. I remember trying to iron the ‘knife pleats’ and the cloth below the same to get this crisp look. It never struck me to buck the system and get box ‘pleats’ which were smarter and easier to manage. Was that an adherence to the prescribed uniform or a straight mind which never thought out-of-the-box? The knotting of hair into tight braids was never questioned and it was a scandalous event when a daring girl decided to tie just one braid instead of two. Why this is even a memory for me is that now I see my daughters going to school with hair all over the place with not a clip in sight. Their carefully ‘tucked in-yet-mostly-out’ look for the school shirt is another mystery! Is this a classic case of setting your priorities (from the school’s point of view) and not objecting to trivialities (imagine a correct uniform reduced to a triviality) and rather concentrating on other pressing aspects like drugs and violence in a student’s life these days?

Does this also mean that our rigid codes for a uniform were implemented as those were simpler times with no such scary concerns for schools and students?

The mother in me still cringes to see my girls casually wiping their mud-encrusted shoes along their socks, which, by the way, are not regulation socks but those skimpy ankle socks. Many a time I actually sat down and polished their shoes and waited with bated breath for the gasp of pleasure from my girls. Alas! their horrified reaction each and every time was, “Mom, you have ruined our shoes! Who wears polished shoes? Are we geeks?” followed by stepping on them to bring them to a suitably dusty level.

The only time when they willingly wear the proper uniform is when they go on a school trip and the teachers insist on this as a means of easy identification outside of school premises. The previous day then becomes a frantic dash to collect all the paraphernalia like IDs, scarves if any, socks and school colour hair bands.

I had always worn a skirt as my uniform and was horrified at the idea of a salwar suit. How times change! With teenage daughters, I was the first one to welcome a shift to salwar suits in my daughters’ school with a long list of positives of the same to pacify my children. My idea of an appropriate uniform shifted to one which covered my children from head to toe with no possibility of a flash of skin when jumping around the basketball court or sitting down on the floor for yoga.

On a tangent, I began to think when a skirt and shirt became a standard uniform. If we explore India, nowhere is this combination a part of our regional, let alone national dress. Is it still the carry-over effect of the British Raj that we sneer at a salwar suit and think of it as down market whereas a skirt is modern and smart? Agreed that we were ruled over by them for 400 years but are we not more than a 5000-year old civilization? Can we not reclaim our culture and norms and let it reflect in our uniforms?

Many religions have strict dress codes when entering a place of worship. Can a uniform too have its basis in the same philosophy? A school is a place of learning and as sacrosanct as any religion and as such should have a dress code reflecting this sanctity.

Whatever the reason behind some private schools abroad making blazers mandatory in a place like Dubai (the British School there demands a blazer at all times), I for one am eternally grateful that first I, and now my daughters’ have a uniform. My husband and his wallet too are grateful for this mercy. After a recent stint to the US I saw firsthand the constant refrain of, “I have nothing to wear to school” or “I can’t repeat this dress!” in the host family and shuddered at the thought of a repetition of the same in my house, with two teenagers to boot.

So this is what I say – Long live Uniforms.

The author is a teacher and administrator and wishes to take up writing full time in the near future. She can be reached at rastogisuruchi@gmail.com.