From last month our school (Sita School) has become strictly illegal and technically we are liable for prosecution. Looking back at Education and Language Policies, for example, from the time of Macaulay’s infamous Minute of 1835 there is nothing sacrosanct in such policies which are often shaped by political and economic forces but nevertheless it is hard to feel both accountable in the public sphere and yet not allowed some space for difference.

Efforts to have a different kind of recognition – e.g., to strengthen the Basic Education National Open School, have so far not been acceptable despite a number of meetings and petitions to the Ministry of Education. There are certain contradictions: for example, where Sevagram in Wardha has been awarded heritage status and been publicly lauded as a new model, they still face difficulties to get recognition.

There are various options for Alternative Schools. Some are survival strategies like registering children in government schools but actually teaching them outside the regular system. Other responses require a re-orientation like starting Learning Centres outside school hours or concentrating only on children above 14 years. Judging by the present trend even these spaces may be closed in the foreseeable future as there are rumours of the government controlling coaching and tuition centres, nursery schools and schooling up to 16 years. The other option is to “lie low” and hope that officialdom is slow in following up illegal schools. None of the above is very satisfactory and many involved in alternative schools would prefer transparency.

The RTE Act no doubt was rooted in a genuine concern to create a more equitable and just society, but in the process it has been co-opted often by market forces and a corrupt bureaucracy.

Hesitation to go in for registration and recognition
This is problematic on several counts: 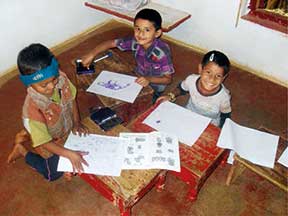 On the other hand, there are innumerable private schools being started which are often connected with local political bodies, religious organizations, or those with doubtful business concerns including real estate dealings who seem to face no problem in securing the necessary recognition presumably because they are not averse to bribery. In all the discussion about quality this seems the least of the concerns of the administration. There are ongoing attempts even to officially postpone, sideline, ignore some of the requirements such as sanitation facilities and space norms.

(In September there was a threat of 2510 government schools being closed in Karnataka). This is exacerbated by channelling government funds to support the 25% quota of children in the private system which could have otherwise been used to strengthen the government school system. Further, the neglect of strengthening English as a second language which means an exodus into private English medium schools.

Laments about’ the death’ of alternative schools may not be in place and certainly these schools do not have a monopoly on quality education. However there is a need for these concerns to be discussed in public. Otherwise, the government machinery will succeed in pulverizing any small or alternative endeavours that are genuinely committed to inclusive education and evolving practice of quality education.

The author has been working in an alternative school near Bengaluru for the last 30 years and has also been involved in sharing resources in art and language with government primary school teachers. She can be reached at [email protected].

Let’s keep the alternatives
Some concerns from an alternative school
Parents must have a choice
Innovation is important
Adivasis, education and the RTE Act
Our efforts will continue