Tuned into primetime news lately? You couldn’t have missed the language debate raging across television channels. Just like the monsoon, this debate is also quite seasonal in India. It comes into the public space with great force, stays on for a few weeks and then peters out quite suddenly. After all nothing stays as the flavour of the media for over three days, you see.

When it comes to having a rational debate on the suitability of English as the medium as supposed to an Indian language, a lot of nationalist sentiment gets mixed up in the debate. However, when we sit down to analyze things dispassionately, we realize that there is no one perfect solution to this situation.

I am unable to make a clear pitch for either the continuance or removal of English as medium of instruction in Indian education. So, I am doing the next best thing possible – list down the pros and cons on both sides of the argument. And also point out some TO DOs to improve the efficacy of education in either case.

The ‘English works fine’ argument
There are more English speaking graduates in India than the Western world put together! Accurate or not, that’s an astounding statistic for a country whose native languages are all far removed from English. The English language might have come into India by force, but now it is seen as a language that symbolises aspiration, success and even intelligence. A job seeking graduate would stand to lose his chance within the first few sentences of his job interview if his English is poor. Never mind the fact that he might be really good at his subject. Such is the prevalence of English in India today. 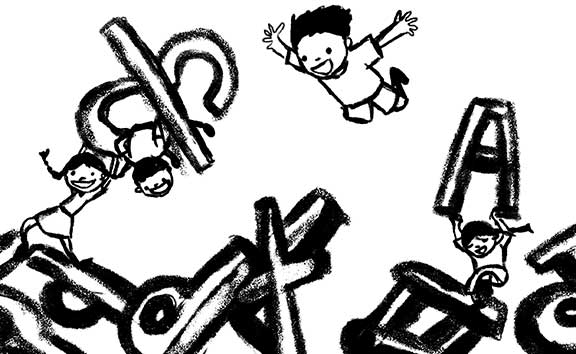 The way we Indians have adopted and embraced the English language is so overwhelming that English pervades all walks of our lives – display boards in shops, apartment names, public transport, official documentation, examination medium even for non-English papers, the list is endless. From play schools to advanced post graduate education, the quality and number of English medium institutions far outnumber the vernacular language educational institutions. Because of our English fluency, Indian graduates easily fit into foreign universities, research centres, and multi-national corporations. This has directly resulted in several members of the Indian diaspora heading large global corporates and power positions across the world.

English also serves a peculiarly convenient purpose in India. It bridges our language divide and facilitates free mixing of the regional population. Tamilian landed a transfer to Punjab but worried about your kid’s education? No problem, there’s English medium! To the extent that English script is the de facto social media standard irrespective of which Indian language you are chatting in! ‘Kal school ki chutti hai’ – Hindi, ‘Naalaikku school kidayadu’ – Tamil. See it’s that simple!

The ‘Indian language is best’ argument
The first pointer in favour of this argument would be our own history. The English Education Act was a legislation enacted in 1835 by the Governor-General of British India to reallocate funds from British Parliament to the East India Company for spreading English education and literature in India. In the same year, the British Government designated English as the medium of education for schools and universities.

An ancient and thriving civilization like India has been under the English language influence barely under two centuries. In ancient India, the medium of instruction was the vernacular at lower level and Sanskrit at higher levels. This was a period of glorious advancements in architecture, art, religion, literature, philosophy, mathematics and science. Then there was a prevalence of Persian in the medieval period. Returning to original status is simply a case of course correction.

Doing away with English is doable. The principal reason for favouring English is its prevalence in technology and science education. But countries like China, Japan and France have a thriving scientific community and all of them have their native language as medium of education. In today’s era of digitization of knowledge and live automated translations, recreating the entire knowledge base in the native language is not such a big deal.

The biggest challenge to replacing English is finding a consensual candidate for nation-wide replacement – Sanskrit and Hindi being the prime choices. While Sanskrit is not actively used in public space, Hindi has too many variants and dialects to be effective. However, the very notion that a single language needs to play an all pervading role is in itself questionable. The government and social infrastructure can be used to create abundant knowledge sources and educational institutions in all Indian languages. Why not leave the final choice of language of instruction to the learner? A natural order will then emerge in the course of time.

Both the arguments sound reasonable, so what next?
The major impediment that the English language education system has caused is not a linguistic one, it’s a contextual one. When kids in a Chennai pre-school, on a sweltering summer day sing “Rain rain go away, come again another day, little Johnny wants to play …,” something is wrong somewhere. Rain is seen as a dampener in Britain, not in a tropical country like India where rains are considered a divine blessing! When a CBSE textbook prescribes fashion in terms of the Paris fashion week but doesn’t enlighten the student to the vibrant Indian clothing customs, how do you expect the student to develop a sense of pride in his traditions? When history books regale the students with tales of gore and invasion of world wars and foreign rulers but don’t highlight the Indian ethos of tolerance and universal brotherhood, we are doing disservice to the learning mind.

The first course correction required is resetting the educational content with a native and moral compass, highlighting India’s history, regional diversity, social and cultural context. Whether this content is taught in English or another language will become less of a bother as long as the content is appropriate. Ultimately language is just a tool for communication, nothing more.