I am frustrated when my students do not follow rules and do not adhere to a scheduled plan. I am frustrated not because they do not listen to me, but because I think they are wasting their time, my time, and the time of the other students by deliberately disregarding instructions. I know that even today there are many schools that make students stand up on the bench, kneel in the classroom, in the corridor or outside the principal’s office. Sometimes students are told to write 100 times: I will not misbehave in class or something to that effect. But does it resolve the problem? The student either writes it mindlessly or has someone else write it. The desired effect of the so-called punishment fails. The child continues to misbehave in the same fashion and the teacher despairs. I would like to hear of more effective methods of getting students to ‘sit up’ in the real sense of the term.

As a student, and later as a teacher, I myself could never cease to wonder at the peculiar nature of punishments in school. If my classmate, or worse still, my bench mate was punished and made to stand up on the bench, I would constantly worry about how he/she may topple over me or upset the bench, and like Humpty Dumpty we could never be put together again! I could never focus on the lesson once such a punishment had been administered! I would pray and hope that the class would behave. There were other students who found the situation comic and would therefore grin and make faces at the punished student. The punished student most often considered the punishment a privilege because he/she could tower over his/her fellow students, and even the teacher. It gave the student an additional reason to misbehave! In effect, it did almost nothing to change the behaviour or attitude of the student.

Detaining a student after school has very little consequences for the child. On the contrary, it affects a host of other people who have had little or no share in the misbehaviour; it affects the teacher because she too has to stay back for the sake of the child’s safety; it affects the non-teaching staff that has to stay behind to lock up after the punishment is over, and it affects the parents since they have to reschedule to pick up their ward (Some institutions are of the opinion that parents take greater care in disciplining their ward when their own schedule is frequently being upset because of their child’s misbehaviour). 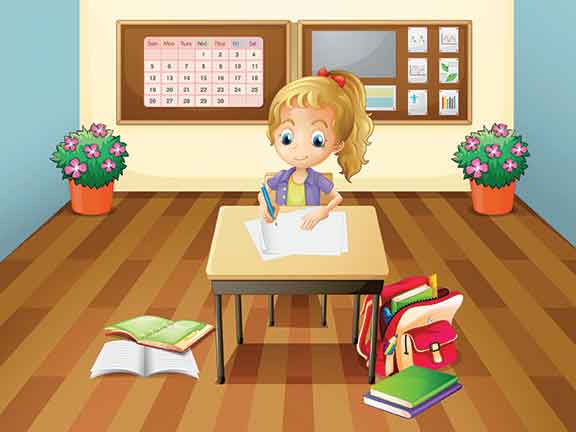 But seriously, wouldn’t it be wiser to have disciplinary actions where we help nurture children? Do we hand out these punishments so that the child suffers and we feel we are in control, or do we punish the child so that he/she becomes a better learner and also a better human being? Perhaps it is time to put on our thinking caps and really reflect on what we hope to attain by ‘punishing’ children.

An alternative to the traditional physical punishments would be to send the child to the staffroom where a special space has been created for these erring students. The minute the student walks into the bustling staffroom, he/she will have to meet the frowns and grimaces of teachers, both known and unknown. The child then has to make his/her way inside the room to the place allotted, armed with a sheet of paper and a pen. The task of the child would be to write an essay on
a. why he/she got punished.
b. how he/she is going to be better behaved.

We ought to bear in mind that punishing a child physically and in the same space as the classroom has little or no impact. Compelling the child to think actively about misbehaviour and putting it down in writing gives the child not only writing practice, but also encourages him/her to think about how his/her behaviour is not acceptable. Teachers can ask the student to write in a prescribed format: either as a letter or as a dialogue between two people on what happened and how it could have been avoided. For older children (class 5 onwards), where teachers have already lectured on acceptable and unacceptable behaviour, and its impact on the class, the student could be sent to the staffroom to write a note of apology to the class and to the teacher for disrupting their valuable time. The student could be called on to read the note to the class. This kind of treatment is beneficial to the child and to the other students because each student is made to realize that classroom time is not any one individual’s time; it is time committed by a particular group of people towards a learning goal that is being paid for by parents who will definitely not condone the misbehaviour.

In handing out such disciplinary actions, the teacher does not lose his/her temper and neither is the student physically abused. At the same time, the teacher does not squander the time of the other students. The child also makes the effort to think about why the punishment has been administered. And most importantly, the child and the class understand that there are consequences for unacceptable behaviour.

Children who misbehave hate being moved away from the limelight. So when they are moved out of their classroom and into a room full of disapproving adults, they understand that no matter how powerful they think they are, they do have to abide by the rules of the school. The child will not have the luxury of chewing the pencil and looking at the ceiling because he/she will probably feel the eyes of other teachers piercing holes in their back. The child also understands that the language has to be good because it will be read out to the class and he/she will not want to be ridiculed for grammatical or other errors.

In meting out this kind of ‘punishment’, the teacher is eliminating unnecessary noise factor in the class, while at the same time, he/she makes sure that the child is not being physically abused. It is likely that the child may become a better person or a better academic. The child also understands that there are consequences to unacceptable behaviour, whether it is inside the school or outside. So let us become mentors and guides and enforce disciplinary actions rather than the traditional punishments that continue to reign the classroom.