When we think of beaches, what comes to mind? Water, waves, sunshine? Sea shells, crabs, sand? Of course. How about sand dunes? Wait, aren’t sand dunes found in deserts? Many of us grow up along beaches without ever having seen a sand dune. 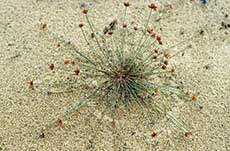 A year after the tsunami, I was in Nagapattinam making a film on the recovery of local communities. At that time there were plans to construct sea walls to protect the coast from tidal waves. Casuarina trees were also being planted by the hundreds along the coast for the same reason. I was impressed but many residents were left cold by the tree planting. I was taken to a casuarina grove by the sea… the trees lay flattened like matchsticks – by the annual cyclonic winds. Casuarinas are tall and thin trees – whereas the original ‘sea barriers’ were forests of trees that were shorter, thicker, and spread horizontally. Waves and wind barriers need a horizontal spread to break and disperse the force. Take mangroves for example – they are not very tall – spread horizontally – original forests that lined the coast – tropical dry evergreen deciduous forests of low trees that had wide roots spreading across the land.

Coastal forests were not the only barriers that protected the land from the sea. South Indian coastlines are famed for their wide flat beaches with an unobstructed view of the sea. However, this coastline was once lined by magnificent sand dunes that rose as high as ten meters or more and extended for kilometers. The dunes are called ‘medu’ in Tamil and I was taken to a few villages to see them and understand their importance in coastal ecology. If you follow this link, you can see a FilmClip that shows the height and spread of a sand dune in Tamilnadu http://www.youtube.com/watch?v=A91zWoJLG5Q&feature= youtu.be.

The author is a documentary filmmaker whose films focus on environment and human rights issues. She is based in Bangalore. She can be reached at ninasubramani@gmail.com.