There are terms of endearment used in several families that have the potential to damage. It is fairly common to be called “motu”, “lambu”, “kalu”, “patlu”, “ganju”, etc. The problem arises when the persons being addressed are not at peace with the way they look or feel and take their given name to heart. Such names may then affect their self-worth and self-confidence leading to a persistent preoccupation with appearance that is detrimental to their overall health and happiness.

Adolescents are particularly vulnerable to such inputs at a stage when they are in the process of creating their own identities with reference to the world around them. Their family environment, social media, cultural messages all influence how they regard their bodies. And the new generation of teens and young adults are extremely sensitive to thoughtless and presumptive communication. There have been known cases of costly consequences.

Imagine a 15-year-old trolled and body-shamed for her small breasts. Are you from ‘Man-chester’ the bullies apparently asked her? What followed was months of depression and bouts of hysterical rage. She pulled away from her Facebook, Instagram and Twitter feeds, and from people, too. Her home became her asylum. At the next turn in this script, the teen found her way to a doctor’s office to discuss surgery. She is a C-cup now; her selfies are all wow; and she got her pound of silicon! 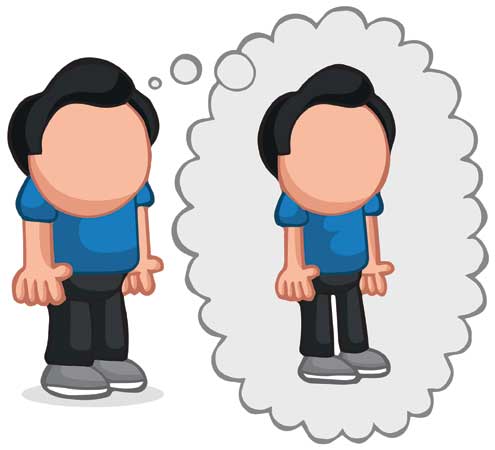 There is another real-life story of a 15-year-old boy from New Delhi. At 12 years, his ‘breasts’ began growing abnormally, a common condition among adolescent boys. He too became a recluse. “My friends teased me; pinched me. My self-esteem was shattered. My parents asked me to join a gym or play some sport. But how the hell am I going to run on the treadmill with the wobbly bits?” he said to a magazine. Apparently, he saw a video on YouTube for chest-reduction and found his way to a cosmetic surgeon, who suggested liposuction, and his parents played along. He is an outdoorsy person again.

These stories are not uncommon any more. It is a source of stress today to have a body that is different from the “ideal” portrayed in the media. Add to that the new epidemic of perfectionism and the peer pressure to ‘fit-in’ and you have double trouble. Adolescents with poor body image may suffer mood disorders and other mental health issues such as depression or anxiety, and in extreme cases, eating disorders or even body dysmorphic disorder.

There is a growing trend where Indian teenagers and pubescent youngsters – bullied, body-shamed, or simply unsatisfied with their inherited looks – are putting their noses, lips, chins, eyes, breasts and bellies under the surgeon’s knife almost as a coming-of-age ceremony. And their sense of beauty is synthetic, unreal, plastic – dictated and designed by Bollywood, Hollywood, rom coms, reality television, social media. Aishwarya Rai’s nose or Angelina Jolie’s lips or the bootylicious figures of Beyonce and Kim Kardashian, David Beckham’s calves.

There is no definitive data on the number of Indian teenagers going for cosmetic surgery, but demand seems to have grown exponentially. “The world of the Kardashians has made cosmetic surgery accessible and reduced the fear associated with it. Some 50 per cent of my patients are kids,” admits Dr. Kiran Lohia of New Delhi. Doctors say that under-25s now make up nearly 70 per cent of the crowds in the OutPatient Department (OPD) clinics of cosmetic surgeons across India. “Youngsters in this age group are usually coming in before entering a new phase in their life such as starting college, a new job, or getting married,” says Dr. Sunil Choudhary, director, Institute of Aesthetic and Reconstructive Surgery, Max Healthcare, Delhi.

As parents, what are the signs that your child may be suffering from poor body image? For one, she may always be looking at her “imperfections” in the mirror. Does he avoid social situations? Are there crash diets and calorie counts being bandied about in the house? Is there negative talk about their own bodies and a need for constant reassurances? At times, the parents themselves may be overly preoccupied with appearances and food, thus setting up their children for an excess of sorts.

One wonders, where does it stop though? Teens want to look like their favourite Snapchat filters now. Dr. Neelam Vashi, founder and director of the Boston University Centre for Ethnic Skin coined the term “Snapchat dysmorphia” to explain the worrying new trend. In her recently published paper in the Journal of the American Medical Association’s Facial Plastic Surgery, she says teens are increasingly altering people’s perception of beauty worldwide. “A little adjusting on Facetune can smoothen out skin, make teeth look whiter and eyes and lips bigger. These filters have become the norm.” And it’s beginning to lead to real issues. Body dysmorphia, for example, is a condition that involves “excessive preoccupation with a perceived flaw in appearance, classified on the obsessive-compulsive spectrum.”

The respectful thing to do is to help the young develop a positive body image. The adults around them can avoid comparison with other children merely on the basis of their looks. It is best to reject name calling with siblings and cousins. What can build a young spirit is to be appreciated for normative qualities such as kindness, thoughtfulness, fairness, etc. It would give them a positive push towards a future of fulfilment to be praised for their inherent and unique talents. The time, in fact, has come to communicate with the extended family to stop commenting on body image. All that is needed is a regular routine of healthy eating, physical activity and the confidence that the parents are available to discuss any concerns about their changing body image.

The young often have an inflated sense of benefit and a minimized sense of the risks involved in cosmetic surgery. Is the procedure necessary at this age, are the expectations realistic, and are the teenager and his/her parents aware of the risks involved? A detailed informed consent, effective counselling, and a cooling period to rethink the procedure are recommended. At times correctional surgery has vastly improved the quality of life of teenagers. The surgeon’s scalpel has helped alleviate the nagging backache that girls with abnormally large breasts experience, or those children born with cleft lips. But others go under the knife, again and again, to cope with some inner sense of being imperfect.

The problem is that the results are not always desirable; who hasn’t heard about Michael Jackson’s nose falling off? “From a psychological point of view, adults seek to stand out in a crowd; teenagers want to fit in among their peers,” explains psychiatrist Dr. Ambrish Dharmadhikari of Mumbai.

The prudent thing is to keep an open mind, connect and communicate with honesty and compassion. The stakes here are higher than they have ever been.

The author is a former teacher/journalist, published author and professional speaker on generational empathy with a background and training in media, having worked in advertising, public relations, documentary film making and feature journalism. She can be reached at
neerja@neerjasingh.com and https://neerjasingh.com.