For me, school was just a place one went to every day for reasons beyond comprehension, a place filled with confused and confusing adults who spoke of matters that didn’t matter much. If anyone ever asked me what I did in school, I think I’d tell them that what I really did was to consciously avoid those “I want to speak to you,” situations that my sister constantly found herself in. She liked being difficult and enjoyed being difficult to reach. I preferred to stay out of shooting range – that meant keeping my grades high and my profile low, so my parents could stay out of school and the teachers would never ask for them.

The house I lived in was beautiful by all standards. My parents had travelled enough and read enough and spent enough to make it so. They were sensitive to the Arts and our house was envied as a gallery or a museum of exquisite taste. That the house overlooked a vast expanse of land, sky and sea made it even more of a castle in the clouds but when I remarked once that it didn’t look really lived in, my mother said, sharply, “Well, why don’t you live in it sometimes?”

But at night, the sea churned up strange ideas in me, strange hurricanes of feeling, strange passions of the mind, strange dreams that shook me awake and left me shivering. Then I would want to leave the house that very instant – everything around me would take on shapes and shades of threatening grey, the paintings on the walls would swing and Mother’s china and glassware would look like accessories for a ghost’s tea party. The curtains would billow out into huge cream and golden bolsters and the crimson carpet and upholstery would look as if the room was drenched in blood. All this, while another sea roared in the heavens and wild, brilliant lightning flashed like silver arteries across a midnight sky.

“Very dramatic,” scoffed my sister when I dared to tell her one evening. “You read rubbish and you think even worse things.”
“Too much television,” my father said wisely, not looking up from his book, but so sure of his snap judgment.
“You are over working yourself,” my mother soothed, “Just go to bed early tonight and maybe take the day off from school tomorrow. Your sister will take a letter to the teacher.”

But I couldn’t let that happen.
Think of it:
“‘Dear Madam,
As my daughter is unwell, she will not be able to attend school today.”

Think of the teachers, their frowns and their disbelief. Of course I was perfectly well – I was just shamming. Or avoiding a test. I could hear their voices in the staffroom. I could see them asking my sister in hushed, concerned tones as to what might have happened. And I could see my sister getting more and more annoyed, coming home with her usual sneers about the school, and of course, the fact that I had made her get involved in something that should be my business, not hers for some stupid dreams and absurd fears that I needed to cope with better. Surely, at age nine, I could do better than be scared of the sea. Was she ever scared of the sea? Was she ever scared of anything? So what if she was fourteen – she had never feared anything. Ever. She was ashamed to have a sister like me.

I could see my mother full of common sense and homemade remedies – herself sitting beside me and studying for her next play reading while I ate my favourite dinner. I could see her looking up now and again, smiling, sometimes taking my hot hand and resting it against her cool cheek and saying, “I think you’ll be alright in a while. Listen to this and tell me what you think of these lines. They have to be said to someone far away, so I have to throw my voice across like a rope. The other person has to seize my words and pull himself together…”

Mother was a fine stage artiste, but she didn’t fool me with her attempts to create parallel situations.

Then there was my father – tall and handsome, the way one pictured self-made men to be – confident, with a deep, throaty laugh. The reassuring strong arms would draw me to his chest and he would say, “Come along, now. We can’t allow these little things to get in the way. You are my fine, tough little girl. Here, let’s do this crossword puzzle…”

No, I gritted my teeth, no, I would go to school the next day. I would look at that blackboard and the little checked squares in my exercise book. I would try to make sense of the long winded definitions and stop thinking about why British spellings were always “correct” when American spellings were so much easier to remember. And when the teacher asked me to answer her questions, I would smile in a way that I had mastered so that I would always be known as shy, not scared. 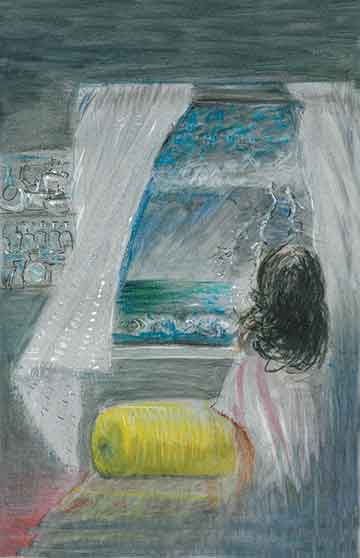 I dragged myself up the following morning and left for school, promising Mother I would tell the teacher if I felt unwell. I wondered how long we would continue living here, at the sea front, and whether I could ask my parents to send me to away to boarding school. Enid Blyton’s books were more than very special for me to read and with a morbid sense of identification, I read and re-read the stories on water and swimming disasters. Somehow, the girls were stronger in those stories; someone always understood them and things turned out alright in the end.

Well, I thought, fiddling with my satchel strap, there wasn’t much I could do to become like any of those girls. I would just have to carry on like this, frightened of the sea and being called a fool for it.

The feeling of helplessness and self-disgust was so strong that I could feel it all rising like bile within me and the classroom conversation buzzed with the dull insistence of a trapped insect in the fetid April afternoon.

My teacher was discussing fractions and as I watched her steady hand write the white digits on the blackboard, I felt there were parts of my head that were being snapped apart into halves and quarters and eighths. And in every one of those terrible pieces, there were other tiny pieces, and in those, there were others and in those, there were even more and each time I looked at the squares in my exercise book, I couldn’t write in them. I tried so hard to put all my strength into the tip of my pencil and press hard on the page, but the little squares were like water tight compartments full of a strange transparent liquid.

“Sara?”
I heard the teacher’s voice as if from another star.
“Sara, why are you crying?’
Was I? I dropped the pencil and blinked several times as I wiped my cheeks dry.
So I had been crying and she had seen me. I wondered if anyone else had seen me – and then I realized I was alone in the classroom but for the teacher seated at her desk.
“Everyone has gone home,” I heard myself whisper almost disbelievingly.
“Yes,” she said, gently.
“Oh –,” I began and then stopped, wondering what to say.

The teacher began to cross the room towards me.

I felt myself stiffen.

Now she was going to say those terrible words, the words I worked so hard to dodge and avoid.

But the teacher merely asked, “Would you like to do your sums at home and give me your book on the next arithmetic day?”

I don’t think she expected an answer, really.

She just helped me put all my things away and watched me load my satchel. When I fumbled, she used her strong, steady fingers to fasten the clasps.

I pulled the satchel off my desk and slung it over my shoulder.

She walked back to her desk and gathered her papers. Then she paused at the switchboard to turn off the lights and fans. Then we stepped out of the classroom, walked quietly down the corridor and out into the afternoon sunlight.

That night, I looked out at the sea surging outside my window. One day, I would tell someone all about it.

The author adds: The teacher in this story is inspired by Renu Balakrishnan and Anjuli Kaul, two teachers I admire greatly and wish, in many ways, I could be.

Bubla Basu is a Mumbai-based educationist and children’s author. She is associated with media and conducts independent classes on Shakespeare, Film Studies and Creative writing. She can be reached at
[email protected].