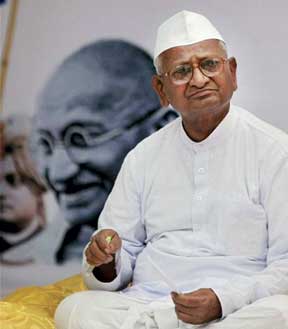 Corruption is something we in India are familiar with. ‘Enough is enough’ is the stand taken by the Anna Hazare movement against corruption. ‘The Constitution’, the ‘Lokpal Bill’, the ‘Jan Lokpal Bill’, ‘Civil Society’ have all become terms that have been much bandied about in the press. What do these terms actually mean and what will such a bill achieve?

As teachers we must not get carried away by the emotional fervour of a movement but instead use the opportunity to make our students aware of the value of the Constitution for what it holds for citizens. Further, it allows us to talk about the value of informed debate around issues that affect its implementation. What exactly is the debate surrounding the Lokpal bill all about? Why are some groups opposed to the Jan Lokpal bill? Are there alternative ways to counter corruption in this country? Talking through these questions can bring a civics lesson alive, and demonstrate its relevance.

What is a Lokpal?
The idea of a Lokpal or an ‘ombudsman’ started in Sweden in 1809 when the Swedish Parliament appointed an official person to investigate citizens’ complaints against government agencies. An ombudsman acts as an extra check on public administration. Many countries, such as the Scandinavian countries, Britain, USA, Canada and Australia have an ombudsman.

Who appoints a Lokpal?
An ombudsman is an official – usually appointed by the government or by the Parliament – who works within the ambit of the elected government. This is not acceptable to the Anna Hazare group, who want the Lokpal to be directly accountable to the people.

The author works as an educational consultant with different schools and is currently training teachers for municipal schools at Muktangan, Mumbai. She can be reached at rohini.oomman@gmail.com.