I have been a teacher for a year now. Among the several problems that I face, the most embarrassing one for me is to ‘catch’ the students who cheat during a test. I find it extremely awkward to swoop down on the ‘cheater’. Still worse, once I spot my culprit, I can’t seem to say anything worse than, “Don’t you know better than to cheat? Why don’t you study?” I would like to ‘educate’ my students in the real sense of the term, at least as far as cheating is concerned. Help!

Even after decades of ‘catching’ her students in the act of copying, a sensitive teacher is at a loss for words. Perhaps if we ‘educate’ students in the real sense of the term, they will understand the baseness involved in cheating, and how in the long run it will harm them.

In a recent course that I conducted for students in the 6-8 age bracket, I was giving students instructions on how to tackle a test. They were general instructions on writing legibly and neatly, reading the question thoroughly and then answering accordingly. My last commandment was, “Look into your own paper, and…” The students concluded my sentence saying, “…do not copy.” Pausing, I said, “That is not what I was going to say! What I want to say is do not write what your friend or partner has written because it may be incorrect. You probably know the answer yourself. Do not show your answer to your friend because you are not helping him or her in any way. In the final exam, you will be seated away from one another, and therefore your friend will not do well. The marks you get here are not of great consequence.” There was a pregnant pause. Somehow it seemed to have sunk in, because from then onwards, before every test the students began giving the instructions themselves, and concluded by saying that perhaps they knew better! 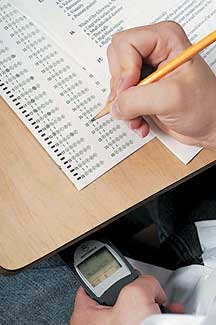 This kind of education will work with the more sensitive students once they perceive that cheating or copying is not a strategy that will help them or their friends, but will ultimately be an impediment in their academic career. Moreover, even the more ‘adventurous’ students will understand that they cannot escape your vigilant eyes!

You can spend a good part of the first class explaining the kind of environment you wish to have in class, especially during tests. Many students think that teachers gleefully pounce on the cheater to expose and humiliate him. By having students understand that it is a punch in YOUR face to catch a cheater in YOUR class, you will probably make them aware that the incident is not only embarrassing, but also a terrific blow to you. Make it explicit that you are not judging them by their grades alone, but by the way they interact and conduct themselves in class. Are they willing to wait while a struggling student offers an answer in class, or are they in a hurry to rescue the student? Explain to students that it is these ‘rescued” students who ultimately have to resort to unethical practices in tests because they have not been given the time by their own peers to assimilate subject knowledge and respond to questions. I constantly tell the little ones in my class not to be ‘selfish’! Today they understand.

It is essential for students to understand that if they value themselves, if they have self-esteem, they will not lower it by resorting to copying, because in doing this, they admit to themselves and to others that they are not worth their salt. Din it into their heads that a low grade will not be frowned upon as long as there is a reasonable explanation – something prevented them from preparing for the test or perhaps the test was just beyond them. When teachers give a regular feedback to students who fare poorly, students understand that their progress or lack of it is being followed up with genuine interest. Make note of the positives in the otherwise negative test. Perhaps the presentation was neat or the diagrams, even though they were totally unconnected with the question, had been drawn well. Make sure that these facts are mentioned to the student to bolster his confidence. You are making the student understand that he is capable; he only needs more focus.

Standing at the back of the class while students are writing a test is a good way to monitor a class. In doing this, the teacher gets a better view of the entire class, and therefore students are less prone to look into the answer scripts of others. In case you catch a student, find out from him what made him cheat: was it because he couldn’t understand the subject, or because he hadn’t studied or because he thinks it is a cool thing to do. Have a one-on-one counseling session with the student where you point out how disappointed and disillusioned you feel when one of your students cheats. Also point out to him that there will be occasions when there will be no one to copy from…where will that leave him? Getting students to think about their act is a better way of tackling the problem than putting them on the defensive. Once they feel that they are as good as the rest of the class, they will slowly stop resorting to copying and cheating. Tackle cheating aggressively; don’t shy away from it. Rather than humiliate and crush the student, hold his hand and tell him that the worst thing in life is to lose one’s integrity! Keep at it and you will find that your patrolling has helped curb cheating! You are right; this is the greatest education you can give your class!