Most of the time when one imagines a school environment the first thing that comes to mind is children clad in school uniforms. Besides being a common attire, the school uniform plays a vital role in the life of students and their experience of schooling. Schools have students of different socio-economic and cultural background and uniforms try to bring a sense of oneness among the students.

From my observations, the school uniform plays a critical role in bringing children to school in rural areas in Tamil Nadu. Every year, a major task for rural schools is to get the required numbers of uniforms for all the students. The Director of School Uniforms identifies an agency to provide material and to stitch the school uniforms. The school headmaster estimates the number of boys and girls in each class, for the next school year and provides this to the education officer at the block level. This is compiled by the district education officer to get a count of uniforms required for each district and sent up to the directorate of education. Once the uniforms are ready the required numbers are sent to each district level officer who in turn sends them to the block. The school headmaster collects the school uniforms from the block level at the beginning of each school year. In Tamil Nadu each student receives four sets of uniforms per year, two sets in June, one set each in September and November. 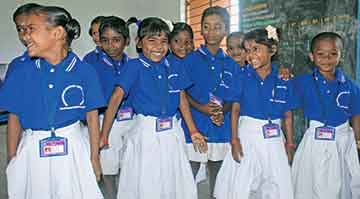 During my own school years, not all children in government schools were provided with a school uniform; economically backward students were provided uniforms and only one to two sets per year. I did not receive the free uniforms and the challenge that I faced in those days was having enough sets of uniforms to wear throughout the week. Though my family could afford it, the cost of stitching a uniform was too prohibitive to have more than two sets for the whole year.

Even today most families in rural areas hardly have the means to provide for extra sets of school uniform for their children. As part of the education aid that Kalanjiyam provides to students, the cost for uniforms is also included. Kalanjiyam also provides one additional set of school uniform (other than those provided by the government), and these are used on Saturdays in our adopted schools. Parents of children studying in the rural government schools that Kalanjiyam works with report that having free uniforms provided by the government is a boon to them, and encourages them to send their children to school.

Revathi, a daily wage labourer and mother of two reports: ‘I have one girl in the 5th and a boy in the 7th class. This year they have received four uniform sets for the year, so my children are happy. The government has introduced new colours as well this year, fawn colour skirt or shorts and light colour shirt. These are easier to maintain than the white uniforms which become soiled and dirty very easily. I appreciate that the government provides same colour uniforms to all students without differentiating between the poor and the rich. The size of the uniforms we get are always bigger, so we have to get them altered in our village by a local tailor, so I do end up spending on each uniform. When we wash the uniforms they usually run colour and tear easily. By the end of the school year, my children will only be able to use two of the uniforms’.

‘While there are drawbacks, getting four sets of uniforms free of cost for the year is very helpful; If we did not get school uniforms from the school, we have to buy at least two sets of uniform for the year. It costs a minimum Rs. 200 per uniform and being a labourer, it is hard to spend on getting school uniforms stitched’. Revathi says that her daughter is very happy with the new uniform. ‘I like the colour of the uniform so am happy to wear it every day. A few years ago they gave us blue colour uniforms, but now we are getting fawn colour and all the children like this new colour more.’

The norm of school uniforms is quite ingrained in the Indian education system and in the psyche of our communities. It will continue to play a major part in defining a student and his/her identity. 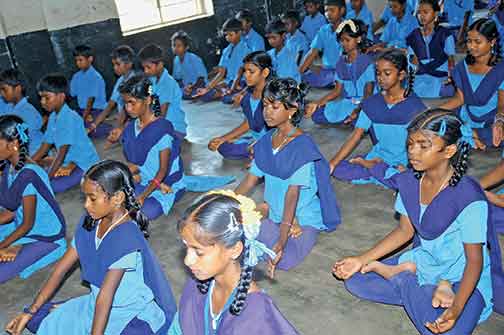 A student’s perceptive ‘School is the place where all of us step in at a tender age. In one word, life begins at school. A child spends his or her 12 years in school and it’s not just education, it’s also the principles that are taught that are important. So what is it that comes to our mind when we first think of school? It can only be the dress code that is the uniform of a school. A uniform creates a sense of unity among students.’

‘In every school there are students from different backgrounds but with the school uniform everyone becomes one, the only identity that dominates at that moment is all of them are representatives of the same school. This is a great feeling of togetherness. Students in uniform not only care for themselves but also for their friends and they try to contribute to the growth of their peer group’. ‘A uniform is the identity of the respective schools. A child with a particular school uniform always feels that he belongs to the school. A uniform is not only a dress code, it is a code on how a student should be in school and is supposed to instill basic discipline among students. When we are disciplined everything around us falls in place. The school uniform also helps students to be responsible and this improves the academic standards.’

‘A uniform is beneficial when students are outside the school building. Being easily identified with a particular institution may make the students more aware of their behavior and prevent them from getting into unwanted situations’. To sum up, I can say that mornings become easier, there is no ‘what to wear dilemma’. As a student, I feel proud to wear a school uniform which makes me feel important.’

The author is the Founder-Director of Kalanjiyam. He can be reached at kalanjiyam@gmail.com.