As the afternoon set in, Cubbon Park’s children’s library was gearing up to welcome what promised to be a pleasant evening. With life size drawings of children greeting one and all, the space was decked up to provide a homely feeling for the launch, of the book, Aata Aadu – come play with us.

Aata Aadu is the result of Maraa’s (a media and arts collective based in Bengaluru and Delhi) work with six educational institutions. The project that culminated in the book had art facilitators using media like photography, theatre, music, shadow puppetry, digital fabrication and painting, and working closely with children and young adults, exploring public spaces in the city through their perspective. Aata Aadu emphasizes the importance of play and creativity in learning.

The program got off to a beautiful start with Harshika Amin and Aruna Manjunath (dance and theatre practitioners and facilitators) capturing the attention of the audience with their conversation and storytelling which they effortlessly connected to imagination and play. 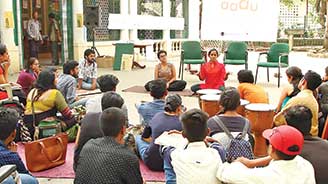 The storytelling session was followed by a conversation on ‘play’ between Prakash Iyer (faculty member at Azim Premji University) and Pallavi Chander (creative arts therapist), who also launched the book. Their conversation was interspersed with displays of the work done with children and young adults in the project. The photographs, puppets, drawings, murals all spoke of the intense work done over a period of six months.

Pallavi spoke about the different dimensions to how imagination and play bring a lot of learning to the children. Play opens doors to several different skills that become important foundations to life. Prakash spoke about creating more spaces for experimentation by including the arts as a medium of learning. But he also reminded the audience of the responsibility that came with trying something new. Both speakers envisioned a major role for arts and play in the field of education and learning.

Speaking on the six month long project Prashant Parvataneni (who was instrumental in bringing this project into being) said a big challenge they faced was to find time from the regular school/college schedule to work on the project. They also had to balance giving students the freedom to explore and yet have a structure to the project.

The event was an enriching journey of self-discovery for all those who attended. Carving out a bigger role for the arts in education was one purpose of the project and another was to break the rigidity with which the arts are perceived.

The launch was made memorable with a performance by the India Folk Band on the djembe making the atmosphere enchanting and rhythmic.

The author is passionate about working with children. She runs a learning centre called Sahasraa which aims at making the journey of and with children an enriching one. She also conducts after school and holiday programmes for children, designs curriculum for preschools, conducts teacher trainings and workshops for parents. She can be reached at [email protected].