All through my school years there was one fervent hope I had: that the Indian coastline would have fewer squiggles and would be straight! This was not because I knew anything about storms and cyclones or had read about how Orissa and other parts of India were lashed by storms and how the coast was exposed, etc. My hopes and dreams and ‘prayers’ had a very pragmatic practical reason! The dreaded geography class and map drawing!

Right through my school years, from the age of 10 or so, when map drawing began, till my matriculation examinations, geography was the bane of my school life! Not because I could not remember facts or reproduce them! I must have spent hours, days, and weeks memorizing lists of minerals found in states, names of rivers and mountains until they must have come out of my ears; after class 11 it was with great relief that I ‘gave up’ geography and never regretted it. Those days we wrote the matriculation examination in class 11 and had only one year of pre-university.

The type of question I dreaded most in a geography test/examination was: ‘Draw the map of India then draw the paths of the important rivers, or mark the mountains, or show where the following minerals are found. Even in class, when we were asked to draw the India map I would watch with envy when my classmates would be able to do a reasonable reproduction! 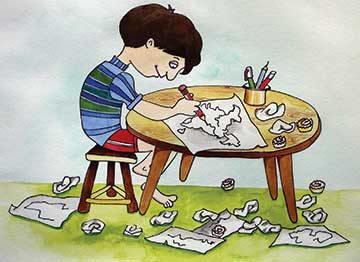 I can’t draw for nuts, and so while the map was clear in my head, I was never able to produce even an approximation to ‘something that can be recognized as the map of India’. Map drawing classes were nothing but periods of frustration! The teacher would walk around class and I would be told, repeatedly: “That is not how the coastline looks.” I would look at the map, but carrying all those curves and, worse still, trying to get my recalcitrant hand to reproduce them? Impossible!

Once, I remember, we were asked to draw the map of India as homework! I thought to myself: At least, this time, I will ‘draw’ a good map! But draw I cannot! So, I asked my mother for some money, and with what I thought was good ‘cunningness’ went off to a stationery shop and bought an outline map of India, along with some tracing paper. I am sure you can visualize how my ‘map of India’ got ‘drawn’. Once the deed was done, I happily filled in the information needed, and with a great sense of achievement, handed in my homework the next day! I was sure that at least this time I would get ‘full’ marks for map drawing! Alas, that was not to be! The teacher took one look at the map and declared: “This is not drawn but traced! Sit and draw the map in front of me!” Frustration mounted and I must have sharpened my pencil five to six times and torn paper by erasing my not so successful attempts at drawing that whole period. In the end, I don’t know whether it was the teacher or I who heaved a bigger sigh of relief when the bell rang.

If I was not struggling to commit the Indian coastline to memory I spent the rest of my ‘studying-for-the-geography-examination’ time committing useless facts to memory. Which state produced iron, or coal or copper, how many tonnes, etc. Today, if someone asked me what my state produces, I can tell you that Tamilnadu produces coal: not because I remember it from geography but because later in life I had read about the strikes in the coal mines at Neyveli and also because in my childhood we cooked using LECO (leco is a kind of coal which is a mixture of lignite and coal). And this is true of the Kolar gold fields and the open and close cast mines in Andhra Pradesh. Having travelled, or read about their problems in the newspapers I know all this. For the life of me, I cannot remember one fact from geography that I must have memorized and reproduced in countless tests and examinations.

What then is the purpose of teaching geography as part of a school curriculum? It cannot be to torture students to draw maps and remember and reproduce facts that have no meaning for them. It has to be something else. This, I discovered, when I sat in on classes in an alternative education centre called Anand Bharathi. This is a school run only in the afternoons, from two to half past four to enable girls who work as domestic servants to study and pass examinations privately. That school did something valuable. As a part of geography class they were asked to walk around their own neighbourhood and actually draw a map of their own locality. They were also asked to identify trees and flowers in the area and indicate them on that map. They analyzed soil from different areas and understood about terrain and differences. They actually made a rainfall gauge and found out for themselves how much rain they got over a period. With this practical knowledge, geography became real to them.

In a sense, they became ‘real’ cartographers who actually created their own maps. With a great sense of belonging and ownership these ‘maps’ were displayed on class walls.

This is what geography should be about! Today when I look at my school record book and look at my ‘abysmal’ geography marks (I never crossed the 50 threshold) I understand why.

I also send up a fervent prayer that geography classes in the 21st century are not torture chambers for the thousands of children who either cannot draw or cannot remember assorted and disjointed facts easily.