For a student there’s nothing better than walking into the classroom knowing that the next hour would be spent on experiments and discussion. For the teacher, using experiments to teach is a fantastic way of engaging the students and keep them wanting more. Lessons in chemistry can include everything from learning about the elements in the periodic table to observing the ‘chemical wonders’ in our environment. For instance, when considering chemistry and the atmosphere, lessons could include the components of the atmosphere, acid rain, the greenhouse effect, precipitation, pollution… the list can go on. This article is about something we see every day and very rarely take the time to enjoy…Clouds! The study of clouds is usually done in geography classes but the formation of clouds involves many chemical processes. So how about making one in the classroom to get the cloud..er… ball rolling? 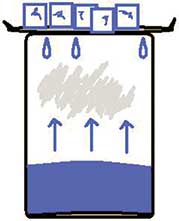 There’s something magical about clouds, how water, ice and air come together under just the right conditions to form something that could be dark and ominous or resemble cotton candy. To make a cloud in the classroom you would need a glass jar, hot water, some ice-cubes, a metal plate with a rim, and a black chart paper. Fill half the jar with the hot water and cover it with the metal plate. Then place the ice-cubes on the plate. To make it easier for the students to see the cloud, place the black chart paper behind the jar.

Once the cloud is formed, ask the students what chemical processes they think were the reason for the formation of the cloud. Why was hot water used? What would happen if cold water was used instead? What is the cloud in the jar made of? Seeing first hand, the process of water vapour rising, cooling on contact with the cold plate, and condensing to form clouds or water droplets, the students will be in a better position to understand how clouds form in the sky.

For younger classes this would be a good time to strengthen their understanding of concepts like evaporation, condensation, states of matter, etc. For senior classes, the discussion could include the property of the molecules of water vapour, and what the process of cooling does to kinetic energy. Clouds form when an air parcel rises and is cooled, adiabatically, to its dew point, a temperature at which the air can no longer hold all the water vapour within it causing the excess to condense on small particles (condensation nuclei) like dust, smoke, or ocean salt in the air. The rate at which the air parcel cools with increasing elevation is called lapse rate. For unsaturated air this is approximately 10°C per 1000 metres and is called the dry lapse rate. Air can reach saturation in a number of ways, the most common being ‘lifting’. 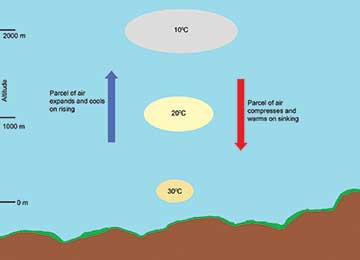 There are three main mechanisms that lift air. Convectional lifting occurs when a mass of air near the Earth’s surface heats up and begins to rise, expand, and cool. When the air gets saturated (temperature cools to its dew point), condensation occurs and clouds, made up of millions of tiny water droplets or frozen crystals, are formed. This process is usually seen in the interior of continents and results in the formation of cumulus and cumulonimbus clouds (thunderstorms). Orographic uplift takes place where the earth’s topography causes the lifting of air and results in the clouds that cause heavy precipitation. Convergence or frontal lifting occurs when two masses of air, with different temperatures and humidity levels, collide on the Earth’s surface resulting in adiabatic cooling and cloud formation. From these three mechanisms, it is clear that adiabatic processes are very important in the atmosphere, and adiabatic cooling of rising air is the dominant cause of cloud formation. So what is an adiabatic process?

The process, whereby a rising or falling air parcel experiences a change in temperature without gain or loss of heat from outside the air parcel, is called adiabatic. It could also be defined as a reversible process that happens in a system when the total amount of energy in the system remains the same. While volume and temperature can change when work is done or by the system, the amount of heat energy remains constant.

How do clouds form? When a parcel of air is lifted in the free atmosphere, it cools. The drop in temperature is a result of the decrease in atmospheric pressure at higher altitudes. To equalize this pressure, the parcel must expand causing an increase in volume. In expanding, it is doing work and thus uses heat resulting in a lowering of temperature as well as a decrease in the pressure and density. 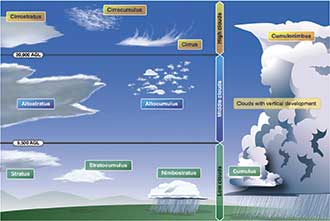 How do clouds disappear? In the atmosphere, if the parcel of air was forced to descend, it would warm up again without taking heat from the outside. This is because when a parcel of air descends in the free atmosphere, pressure increases. To equalize the pressure, the parcel must contract (volume decreases). In doing this, work is done on the parcel. This work energy, which is being added to the parcel, shows up as an increase in temperature. The pressure and density increase as well. If the total amount of heat in a parcel of air is held constant, then when the parcel compresses, its temperature rises. Warm air can hold more water vapour than cold air, and the air parcel is no longer saturated. So the clouds tend to dissipate as the air descends.

Clouds have always fascinated me – when I was younger it was the shapes they formed and later it was how the different types of clouds were formed and what they spelt for weather. Clouds can be classified based on their properties (shape, appearance) or height of the cloud base.

The four basic categories of clouds are:
Cirrus – thin and white in appearance, are high-level clouds and composed of ice crystals.
Stratus – low clouds that can cover the sky like a blanket.
Cumulus – fluffy clouds with a flat cloud base and height dependent on humidity of rising air.
Nimbus – Mid-level clouds that bring steady precipitation.

But these can be combined to generate other clouds which show mixed properties. Would your students like to be cloud watchers? You could have your students monitor the clouds in the sky each day for about two weeks and draw a chart based on what they observe. You could also take photos of the clouds if possible. Watching the clouds, their development and movement can give you an accurate sign of approaching weather.