“Humour is the great solvent and disrupter of excessive literalness in thinking” – Egan 2005, p24

Sit quietly in a classroom full of children with no teacher around. Surely, you will see smiling faces, talking and laughing. Most conversations amongst children are about things that interest them, things that are funny, different, weird, or simply novel. Why then are teaching and learning meant to be ‘serious’ business? Aren’t we taking children away from their real selves? We can crack jokes about Alexander, Pythagoras, Galileo, and Shakespeare. Would that diminish their contribution to the various fields of scholarship? Or would we understand their work any less? These questions need to be addressed because the classroom should be a lively, bustling place to be a creative space.

According to Wilmann (1940) the essence of humour is that it is the result of “some sort of contradiction or incongruity” (p.72). Such incongruities tend to foster imagination and help us to think flexibly about a topic (Moreall, 1989). By looking at something in the wrong context or category, we actually “reinforce the category it pretends to disrupt” (Egan, 2005, p.25). So anomaly, oddity, aberration are the makings of humour.

We can use humour in our classes in many ways. We can share ridiculous or odd habits of famous personalities or anecdotes that lead to important discoveries or we can locate it in the teaching content. It all begins with the agency of the teacher whose choices decide the classroom ethos. Following are some examples. Most people do not know that Charles Dickens, the famous author could not bear to have his hair out of place and he ran his comb through his hair a 100 times a day. He walked continuously while composing his work and the physical writing was done by an assistant. Thomas Edison tested his research associates by getting them to drink a bowl of soup under his scrutiny. He checked whether prospective employees seasoned their soup before tasting it. He wanted to reject people who started out with too many assumptions. Einstein once plucked a grasshopper off the ground and ate it. He would take his violin along on bird watching treks, playing music with tears flowing down his face. French novelist Honore de Balzac consumed as many as 50 cups of coffee each day. Dr. Nakamatsu does his brainstorming in a ‘calm room’, a bathroom tiled in 24-carat gold because the tiles block out television and radio waves harming the creative process. T. S. Elliot wore green-tinted face powder and lipstick. Poet Friedrich von Schiller1 sought inspiration from the smell of rotting apples. These examples are hilarious and they break the halo around these personalities. They show their human, not-so-perfect side. A student would cherish these and share them. The acclaimed work like their peculiarities would no longer be untouchable for children but can be discussed, argued, questioned, and modified.

As a mathematics teacher I would many a time carry a math related joke or anecdote to the class and share it when it got monotonous like, “Why is 6 afraid of 7?” “Because 7, 8, 9” (seven ate nine.) “Why is 2 times 10 the same as 2 times 11?” “Because 2 times 10 equals 20, and 2 times 11 equals twenty, too” (Egan, 2005) “Why does an algebra book look so unhappy?” “Because it has a lot of problems.” Children would break into peals of laughter and share jokes as well. This class was never scared of mathematics as they had shared jokes on it. Laughing about something brings it into an informal focus and builds channels of communication between ideas. We drop our guard and start interacting and experimenting with notions, ideas, assumptions, variables. It is the beginning of creative thinking and is really helpful in mathematics. 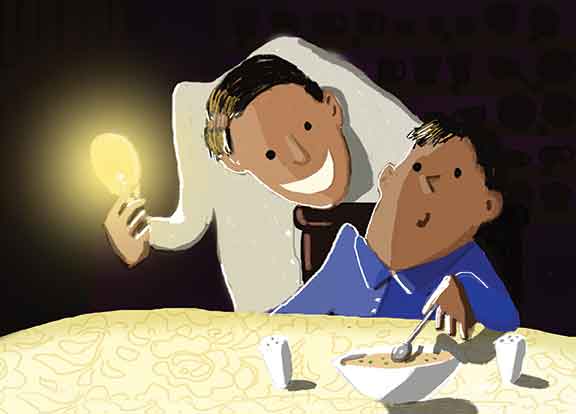 I am sharing two examples from my classroom here. The first incident took place during the first month of my teaching career. I was trying to get familiar with 9th grade students in one of the substitution classes. We started playing a guessing game where each team gave verbal and non-verbal hints to the other one to point out an object. One of the students imitated a teacher and everyone laughed at this. I told them I couldn’t encourage this as a colleague, but I would like to know, how they would act me out. I was surprised to see many hands up. I called them one by one and they had a lot to say. What followed was a series of critical observations about how I spoke, addressed, explained, laughed, etc. They had mapped me out to the dot and I could see that the ice was broken.

The second incident was a session during which I asked my students to think about any activity that does not require mathematics. It was a small group of seven to eight students studying in classes three to five. In this group was Anit2 who hated mathematics. It was his life’s mission to deplore and demean the subject and my main aim was to address this dislike. Anit started thinking really hard because he felt this question was tailored for him. He was sure everyone had the answer but he wanted to be the first to answer. While everyone was thinking, Anit jumped out of his chair. He said, “I know. I know. Simply do nothing, then you won’t need mathematics.” Everyone laughed out loud. Anit was surprised, he thought his was a brilliant response and that is when one other student answered, “But you cannot sit idle all the time, when you find out how long it has been, you will need maths.” Another round of laughter and Anit went quiet. Subsequently, we held a discussion on how everything we do relates to mathematics one way or the other and Anit’s dislike mellowed down somewhat.

I have always believed that “Smile is a curve that straightens out a lot of things” and both the above examples show that when left to take its own course the children’s true nature helped resolve pressing issues. As teachers our first job is to get across to our students and humour is always here to help!

The author has been a mathematics teacher and teacher educator for many years and is currently pursuing PhD from the University of Delhi. She can be reached at poojakeshavan@yahoo.com.

Laugh out loud… with affection
Generating humour in the classroom
Adding fun to learning
Why we need humour
Ha, ha, ho, ho, he, he