If we can create a culture of non-violence today, beginning with the classroom, we will move towards a better future. There may be many ways to do this, but here are two possible suggestions. Before focusing on people, religions, and different groups, we can begin with plants, insects and animals. The idea is that if children can learn to relate with plants and animals, and treat these living beings with respect, they will grow up to treat everyone in the world with respect. A two-pronged approach will work best. One is to familiarize them with nature and animal life in the real world and second, to teach them about it through books and media including short films, or videos on YouTube. The approach should completely move away from the concept of using the natural world for our own benefit, and instead focus on trying to understand nature and animals.

I often used to watch a huge pipal tree that stood near a temple. It had been there for decades, perhaps even hundreds of years. Over time, cement replaced the earth where it stood, shops crowded around it, leaving it little space. In the evenings scores of people visited the temple, and ate at the shops outside. On one such evening, the tree swayed and fell, uprooted. This tree could no longer flourish, its roots probably could not receive water. There was hardly any time for people to move out of the way, yet the tree managed to fall without hurting anyone, and even without destroying any of the shops. Those who had taken it for granted for so many years, now felt sad, but also they began to talk about the tree. Could it think, could it feel? How did it avoid falling on anyone?

In fact several books tell us that trees and plants do think and feel. After narrating a story like this in class, there can be a discussion based on books such as The Secret Life of Plants and The Hidden Life of Trees. The Secret Life of Plants by Peter Tomkins and Christopher Bird, was first published in 1973, and is a pioneering work, based on investigation into plant life by Jagdish Chandra Bose and other scientists. Among other things, the book narrates how experiments were performed on plants after hooking them up with a lie-detector instrument. The machine graph could gauge the plant’s subtle reactions. The book even describes, how, through this method, some potted plants identified a murderer! The book was made into a film ‘Journey Through the Secret Life of Plants’ and can be watched on YouTube. Though the book was criticized as being ‘pseudo-scientific’ or even fiction, recent research suggests that some of the findings may be correct, and that plants do have feelings, they respond, and they know what is going on around them. In this context, The Hidden Life of Trees by Peter Wohlleben is a recent work, written by a forester in Germany. After years of observing trees in forests, he finds that they ‘disinfect their surroundings’ release oxygen and other nutrients, and communicate with one another, through what he calls ‘a wood-wide-web’, something like an internet for trees!

There are other books and documentaries, that would give youngsters an insight into the world of plants and trees, for instance, BBC’s How Plants Communicate and Think – Amazing Nature.

As for different life forms one can begin with insect life. Even in a city, one will find ants, spiders, and perhaps caterpillars. An explanation on their ways of life, the hard work ants put in, the way they coordinate and live in a community, and the complex web-weaving of spiders are among the topics that can be discussed.

Youngsters can even be sensitized to cockroaches. In July 2015, the Tokuyama zoo in Japan organized an exhibition of cockroaches, in an attempt, as it said ‘to improve the image of the hated insect’. There are 4000 varieties of cockroaches in the world, and the zoo explained that they actually form an important part of the food chain in forests, eating fallen plants and animals. Instead of killing them, students should be encouraged to remove their oblong shaped eggs, and keep their houses clean, as cockroaches will not venture where there is nothing to eat. 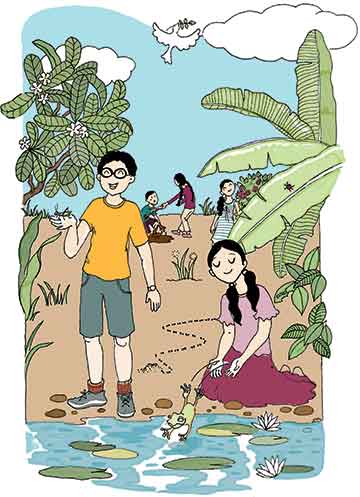 Moving on to higher animals, youngsters need to be sensitized to the need for kindness and compassion towards pets, street animals, farm animals and wild animals and birds. The first step in this direction is to provide them with knowledge.

In a recent article, Robert Macfarlane points to research in the UK that shows that children are better at identifying Pokémon characters than real animals and birds. Once again there are numerous films that can be watched on YouTube on animal life, as well as books. One suggestion is Charlotte’s Web, a fictional book for children on a pig who is saved by a spider. Two books by Jeffrey Masson can also be discussed. In When Elephants Weep, Jeffrey Masson looks at the emotional lives of animals. The Pig Who sang to the Moon is another book by Jeffrey Masson, that describes the life of farm animals and indicates their intelligence and emotions. In this, he puts together different strands of literature, history, and science along with his own studies. As for sea creatures, dolphins are known to help people drowning in the ocean, and there are good books on dolphins and whales, as well as other sea creatures. The Octopus: The Ocean’s Intelligent Invertebrate, shows how this creature is sensitive, intelligent, and playful, while Peter Godfrey-Smith’s book, explores both octopuses and other cephalopods. There are, of course, numerous books on dogs, cats, horses, tigers, elephants, and animals closely associated with people.

There is in fact, plenty of fiction and non-fiction material about animals. To really cultivate non-violence, the teacher should choose fiction where the stories of the animals involved end in friendship and not in conflict or one getting killed by the other. Animals do kill each other in the natural world, but it should be pointed out that people should not copy them, but reach a different level of existence.

The concept of ahimsa or non-violence dates back to early times in India, and numerous examples from the past can be used. A few examples are given below. For instance, the Jnaneshvari, the 12th century saint Jnaneshvara’s commentary on the Bhagavad Gita in Marathi, has a long discourse on ahimsa. In this, he says: ‘A person imbued with ahimsa, believing that the smallest atom is full of minute lives, walks over the ground softly and with compassion. He bestows kindness as he goes, and spreads goodwill in all directions, protecting other creatures with his own life.’

In modern times, Mahatma Gandhi summed up the higher meaning of the ancient tradition of non-violence, when he said that ahimsa meant a love for all, even for those who injured one. Gandhi said, ‘Literally speaking, ahimsa means non-violence. But to me it has a much higher, infinitely higher meaning. It means that you may not offend anybody; you may not harbour uncharitable thoughts even in connection with those who consider themselves your enemies. To one who follows this doctrine, there are no enemies…. If you express your love, Ahimsa, in such a manner that it impresses itself indelibly upon your so-called enemy, he must return that love.’

Sai Baba of Shirdi, as well as Sathya Sai Baba loved and cared for animals. Ramana Maharshi provides another example. According to David Godman who was associated with him for several years, ‘When visitors came to see him – it made no difference whether they were VIPs, peasants or animals – they would all be treated with equal respect and consideration. His egalitarian concern even extended to the local trees; he discouraged his followers from plucking leaves or flowers off them and he tried to ensure that whenever fruit was taken from the ashram trees it was always done in such a way that the tree only suffered a minimum amount of pain’. Ramana also made sure the ashram cow and dog were fed, before he ate himself.

In the classroom, if teachers repeatedly emphasize non-violence, and put it into practice, lives will change. The children should be encouraged to understand that all beings have feelings. They should be taught to carefully place ants and spiders outside the class, and not to injure any living creature. It should also be emphasized that if they should not injure an ant or an animal, injuring a human being is out of the question, no matter what the individual may do. A person changes through love, discussion and understanding, but never through violence. It can be pointed out that shouting at one another is also a form of violence. The teacher must set an example of treating her students with kindness and patience, no matter what they do or say, explaining to them when they go wrong. Living in an atmosphere of non-violence in the classroom, will encourage students to act in the same way in the outside world. This will lead not only to the preservation of the environment and to sensitivity towards all living beings, but will help to create a world with a culture of peace and harmony.

The author is the writer of the best-selling two-volume Puffin History of India, The Puffin History of the World (also in two volumes) as well as of other books. She has taught at Rishi Valley School, and has a PhD in History. She can be reached at [email protected].