One of the most exciting areas of technology that we hear these days is 3D printing. Forecasts say that over the next few years, 3D printing will create a revolution in the area of manufacturing and will merge the power of mass manufacturing and its cost and volume advantages with personalized and customized printing, which is today an exotic and expensive space.

If one observes how a child creates sand sculptures on a beach, how a sculptor creates shapes from rocks and other basic material, how food art is created by slicing and cutting raw vegetables and fruits, or how industrial parts are created on a lathe or a CNC machine, one can also see a different form of 3D shaping, as it applies to 3D printing.

Two basic types
We thus speak of two broad categories, additive printing, as with the first set of examples and subtractive printing, as with the second set of examples. The terms are self-explanatory, in the first case, creations are done, layer by layer on a 3D plane with minimal loss of material. In the second case, we start with raw 3D block or material and then chip, chisel, and shape to arrive at the desired shape. 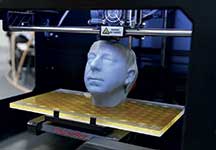 Evolution of 3D printing
Starting in the 1980s, there have been numerous efforts in the direction of 3D printing. Many different methods and processes have been attempted in the US, Europe, and Japan. Tracing through history, one comes across terms like stereo lithography, metal sintering, rapid manufacturing, agile tooling, CNC manufacturing, etc.

Let us at this point not worry about what these terms are and focus on how this technology, over the past 25+ years, has narrowed down and given us the ability to achieve rapid and mass production of 3D objects of different kinds.

The science of 3D printing
In the process of 3D printing, the first step is to create an image of the 3D object. This is done by what is called as 3D scanning. There are many technologies and types of scanners available. In general, multiple images of the object have to be taken. Software programs then combine these multiple images and create a 3D view of the scanned object.

The 3D image thus generated confirms to what is called as an STL file format. STL stands for stereo lithography and is the de-facto standard for such images.

So what is STL?
A scan of a solid object is broken down into a series of triangles which are represented via a specialized language to depict its location on a 3D plane. The file generated can then be stored as ASCII file or binary file, which are essentially digital representations of the scanned object. 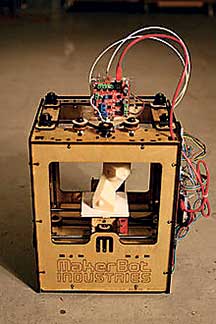 An STL representation of such an image would have four triangles, with an angular tilt in the YZ Plane, and intersection points as defined by the size of the pyramid. It is as simple as that; the co-ordinates of the triangles are enough to reconstruct the 3D image of the pyramid!

Now let us add one more parameter. What if the colour of each surface is different? Or what if each surface has a mix of colours and shades?

This is when additional attributes have to be added to the STL representation of the 3D object. Colour and shared can be added as attributes. This representation is slightly complex, therefore let us skip the actual method for now. What is important is that there is a way to store such information in a digital format.

Barring the very expensive and sophisticated scanners, all scanners create images with some imperfections. There could be discontinuity, holes in images, etc. This is when the scanned image needs manual correction.

Specialized software that can take such images and then provide the user with the option to edit and correct improper formation of objects is available. This process is analogous to what is done in a photo studio today, where the photographer takes pictures and then uses standard digital image correction software to correct the exposure, shades, colours, etc.

Prices of 3D scanners and the associated software can range from several thousands of dollars for the industrial versions to a few hundred for the hand-held hobby versions.

Once the data is corrected and the master STL file created it can be passed to a 3D printer for printing the object. 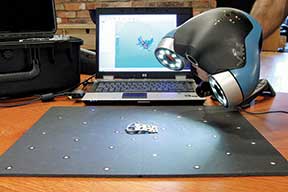 What does the future forecast for 3D printing?
All forms of printing is now happening via 3D, some at the prototype stage and some more evolved at the commercial and mass production stage.

At the proto stage, we now have examples of 3D printed offices, cars, food products like burgers and cakes, medicines, rare to obtain machine parts, surgical equipment, and body replacement parts and so on.

At a commercial scale, we have 3D printers that can now print electronic parts in bulk. In manufacturing, Ford has just completed printing its 500,000th machine part! Multi-level AM processes are being experimented with, similar to the assembly lines that we see in the current manufacturing assembly lines that can print sub sections of a final 3D printed object, with minimal wastage, and then put it all together to create the final product.

In the hobby area, this technology is fairly mature and the prices have started coming down. Today, a 3D printer for home use costs about 500 USD plus consumables, and could come down to about 100 USD, in the near future.

The table below sums up in good detail the sectors and the possibilities with 3D printing.

What can a school do, to stimulate interest in 3D printing?
There are many simple and low cost solutions available for schools with contents that reasonably align with the school curriculum. These are all intended to stimulate problem solving and critical thinking in students, and follow the STEM and STEAM methodology of teaching and learning.

The most comprehensive one is Makerbots. They have a presence in more than 5000 schools in the United States. Grants are available for India based schools, as stated at http://pages.makerbot.com/MakerBot-Grant-Resource-Guide-Form.html.

There are other resources and companies that schools can tap into to create 3D based programs.

An average 3D printer for school use would cost anywhere between 300 USD to 1000 USD, depending on the feature list and ruggedness that one would want. Consumables cost a few thousand rupees and are available locally, via online stores, in India.

The curriculum is typically project-based learning with the intent of promoting engineering interest in students, starting from the middle school level.

What opportunities exist for students interested in pursuing this field?
3D printing is a specialized area of engineering that combines multiple fields of engineering into an interdisciplinary program, focused at the industry application level. In itself, it is not a narrow research field yet. But the sub-components of 3D printing will lend themselves to focused engineering and research. For example, engineering, animation and design, computer and software design, biomedical technology and of late 3D printing design are all courses that are available for students at the undergraduate level.

The World Economic forum has already identified 3D printing and additive manufacturing process as something that is real and of immediate impact, and one that would refine the current manufacturing processes to create a sustainable industrial production method, due to avoidance of wastage and potential reusability of manufactured goods.

Summary
3D printing is a fascinating area of technology that has relevance to industrial production on one end and custom printing on the other, to combine the power of personalized printing with the more evolved concept of mass production. Although still at a nascent stage, it has the potential to be part of what is being called as the 4th industrial revolution.

For a student, this is a fascinating area of study that combines STEAM education, design thinking and fundamental concepts of science and maths to create personalized 3D objects in a very short time and print such objects via a 3D printer.

So what can be built with a 3D Printer?
As the article states, anything and everything. Let us look at a few interesting things we can build at the school level.

This assumes that the school would have a 3D printer. For the more complex activities, basic knowledge of electronics and programming would be required.

A glider powered by elastic band
Remember those paper gliders we used to make to fly them across the room using a rubber band? Let us make a much more colourful and rugged version of the same using a 3D printer. The fun part: the 3D print model can look like a real stealth bomber!

Here are the files and instructions to do so: https://www.myminifactory.com/object/b2-stealth-bomber-glider-improved-flight-powered-by-an-elastic-band-13337.

A Velociraptor!
Well, who does not like Dinosaurs? Here is a realistic model of one, multiple colours with sharp teeth and claws that can be printed using the files from here: https://pinshape.com/items/8569-3d-printed-tinkerplay-velociraptor.

With basic electronics, AVR microcontrollers, a Raspberry Pi and a bit of programming knowledge, and via 3D printing, one can do so. Complete instructions at: https://hackaday.io/project/2250-broke-hackers-model-railway.

More projects?
Follow the projects for ages from 4 to 14 at the link: https://all3dp.com/things-to-3d-print-with-your-kids/.

The author is the Director and CTO of CREATNLRN, a venture focussing on creating an adaptive and interactive learning platform for high school students. He can be reached at uponnadi@gmail.com.