Obviously it is not the children who are responsible for this pervasive atmosphere of religious intolerance and mistrust. We adults have failed the younger generations by allowing bitterness to fester and renew itself periodically, by stoking the fires of prejudice and by giving reams of media mileage to atrocities carried out in the name of one religion or another so that tit-for-tat violence continues unchecked.

Can we do anything in our classrooms to stem the rot? Can we reach the minds of the children and make them see the folly of their elders? It is a tough task. Religious instruction and notions of religious faith are passed on in homes by families, either explicitly or through example. The need to understand or at least tolerate the religious beliefs of others is often not a priority, even for educated and ‘enlightened’ families.

So where do we start? How can we make children take to the concept of ‘secularism’? Should we side-step the problem by ignoring religion altogether in our curricula and classrooms? Or should we laboriously try to make out a case to show that every religion is equal to every other religion? Or should we just say casually that people have different religions just like they have different languages or food habits? Should we aim for honesty or convenience when we talk about religion?

My suggestion is this: in the classroom, approach the topic of religion through the topic of values. Good values are the common goal, a sort of ‘Home’ square on a board game. We can choose different paths. For some the path may be faith in a particular religion; for others, the path may have nothing to do with any religion. Both are valid. Both can lead to the goal. The true test is whether we can stay on the path and try to get closer to the goal of attaining good human values. If we stray off the path to fight with imaginary demons, for instance, if we try to prove that our path is better than other paths, we have to go back many steps and start again. In other words, the message should be: religious faith is a possible path, but not the only path, to something more universal and valuable. It is not a goal in itself. If there are any demons to fight along the path, they are your internal demons alone. No one can stop your progress except you; you don’t have to fight anyone else, you don’t have to defeat anyone else. You don’t have to prove anything to anybody except yourself. And the game is not done till the ‘Home’ square is safely reached by everyone. 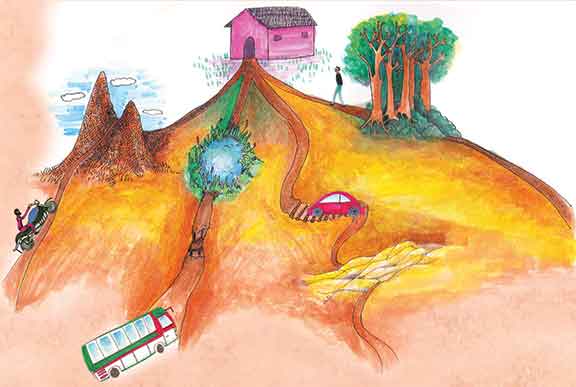 The board game is of course only an analogy here. The creative teacher can come up with age-appropriate variations on this theme, foregrounding good values as the common aspirational goal for all human beings.

Such an approach would not attract criticism even from the most sensitive communities or families. Indeed, it may be welcomed. Many teachers and schools may already be using variations of this approach. It would be very instructive to hear how they have fared.

While we should certainly despair that in our civilization, intolerance, bigotry, and irrational beliefs concerning matters of religion are rampant, we may take some crumbs of comfort from the fact that we are not alone. Even in a liberal country such as the US, for instance, there is endless argument and strife about whether to teach Creationism in science classes.

Our task is indeed difficult. But all responsible and caring adults have the duty to try to make a difference. Let us set out in the hope that the innate idealism of young minds will help teachers reach them with new ideas and reasoned opinions, blunting the messages of aggression and intolerance they see all around them.

The nature of faith

In the temporal world, faith presupposes trust. You have faith that a true friend will never let you down. If the trust is gone, so is the faith. But the rules seem to be different when it comes to religious faith. And it is this difference that makes religious faith a far more permanent, far more potent force – for good or evil.

The difference is simple, but crucial. It is this: while faith in a temporal context…. in the matter of spouse or friends, for example, is predicated on trust and on certain expectations, religious faith is not. If your spouse is unfaithful to you, you do not say your faith is being tested. But when your prayers go unanswered, you might well say so. There is no mutuality, no contract, when it comes to faith in the supernatural or Divine. Religious faith does not rest on give-and-take with The Other; in essence, it is a give-and-take with ourselves.

And that is why the question ‘Do you believe in God?’ is a far more important question than ‘Is there a God?’ It is not the object of religious faith that is important – Krishna, Allah, Christ or any other – but the subject of that faith, namely, the individual. The power of religious faith, and its potential for good and evil, depends entirely on the processes in the individual human mind. It has everything to do with how the experience is internalized and harnessed.

It is the power of this belief, and often the willingness to suspend disbelief, that builds up a sort of ‘spiritual energy’. This energy enables the believer to accept misfortune gracefully, even positively; to try to make the world a better place; to live a meaningful life; to weather all the challenges of the choppy sea of life.

But when belief becomes dogma, when fervour becomes fanaticism, when involvement becomes intolerance, the same ‘spiritual energy bank’ is drawn upon to wreak violence in the name of religious faith.
All this is as old as the history of mankind. We have harnessed the sunlight, the wind and the waves. But we have yet to learn how to send religious faith as a messenger to reach inside the human mind, including our own, and unleash the power for good each and every time.

The author is a Chennai-based freelance writer, editor and translator. She is the author of a children’s story book and a co-author of a text-book series on values education for school children. She can be reached at [email protected].

Is there a place for religion?
A matter of faiths
Secular ethics: concern for our fellow beings