The economy is a country’s base for development. It is how the economy fares financially that decides a country’s growth. Modern economists view natural resources, i.e., forests, minerals, climate, water, etc., as playing an important role in the economic development of a country. But the physical environment contributes to a country’s development only when it is combined with human resources.

Human capital can be described as the health and skills acquired through on the job training and education. It is also defined as the endowment of abilities to produce, which exist in every human being. These abilities can further be improved through formal education, on the job training, and mental and physical well-being. In other words, if the people of a country are well-educated, well-nourished, skilled, and healthy, the country is said to have a large human capital. Looked at in this way a country’s large population, because of its ability to contribute to the nation’s GDP, is actually an asset rather than a liability for the economy. 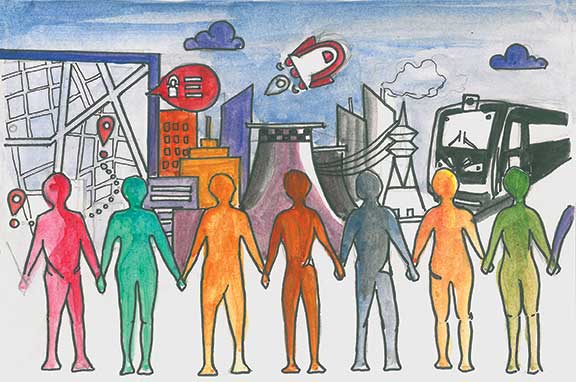 Human capital formation
The major difference between developed and developing countries is the rate of progress in human capital. The underdeveloped countries need human capital to staff new and expanding government services, to introduce new systems of land use and new methods of agriculture, to develop new means of communication, to carry forward industrialization, and to build an education system. J K Galbraith was right in saying that ”we now get larger part of economic growth from investment in men and improvements brought about by improved men.”

There are five ways of developing human capital:
i) Provision of health facilities which improve life expectancy, strength, vigour, and vitality of the people.
ii) Provision of ‘on the job training’ which enhances the skills of the labour force.
iii) Arranging education at the primary, secondary, and higher levels.
iv) Organizing study and extension programmes for adults.
v) Provision of adequate migration facilities to families to adjust to changing job opportunities.

In 2010, OECD (the Organization of Economic Co-operation and Development) encouraged governments of advanced economies to embrace policies to increase innovation and knowledge in products and services as an economical path to continued prosperity. The concept of human capital has more importance in labour-surplus countries or countries that are heavily populated. The surplus labour in these countries is the human resource available in more abundance than the tangible capital resource. The problem of scarcity of tangible capital in labour surplus countries can be resolved by accelerating the rate of human capital formation with both private and public investment in education and health sectors of their national economies. The tangible financial capital is an effective instrument of promoting economic growth of the nation. The intangible human capital, on the other hand, is an instrument of promoting comprehensive development of the nation because human capital is directly related to human development, and when there is human development, qualitative and quantitative progress of the nation is inevitable.

This importance of human capital is explicit in the changed approach of the United Nations towards comparative evaluation of economic development of different nations. The United Nations publishes the Human Development Report on human development in different nations with the objective of evaluating the rate of human capital formation in these nations. The statistical indicator of estimating human development in each nation is the Human Development Index (HDI). It is the combination of “Life Expectancy Index”, “Education Index” and “Income Index”. The life expectancy index reveals the standard of health of the population in the country; education index reveals the educational standard and the literacy rate of the population; and the income index reveals the standard of living of the population. If all these indices are on the rise, then one can note the rise in HDI as well.

Educated individuals often migrate from poor countries to rich countries seeking opportunities. This movement has positive effects for both countries: capital-rich countries gain an influx in labour, and labour rich countries receive capital when migrants remit money home. The loss of labour in the home country also increases the wage rate for those who do not emigrate, while the additional labour lowers wages in the new country. When workers migrate, the early care and education they have had in their home country generally benefit the country they move to. And, when they have health problems or retire, their care and retirement pension will typically be paid in the new country. 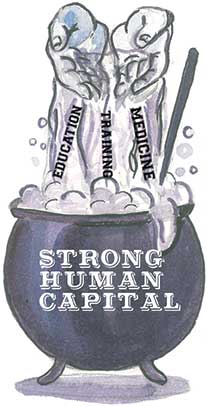 In countries like Canada, the loss of human capital is considered a problem that can only be offset by further drawing from the human capital of poorer nations via immigration. The economic impact of immigration to Canada is generally considered to be positive. During the late 19th and early 20th centuries, human capital in the United States became considerably more valuable as the need for skilled labour came with newfound technological advancement. The 20th century is often revered as the “human capital century” by scholars such as Claudia Goldin. During this period, a new mass movement towards secondary education paved the way for a transition to mass higher education.

It is well-known that India’s transition to an outward looking strategy has been a delayed one. Compared to China India was almost a decade behind in launching its economic reforms; and these reforms were taken up only because of the economic crisis created by the chronic fiscal and trade imbalances of the eighties. Little wonder then that India, unlike China, was unprepared for the openness of the outward oriented strategy. It had not gone through the internal adjustments and transformation which must ideally precede trade liberalization. India is still struggling to undergo the internal reforms required to withstand the challenges of globalization. Among these reforms are
1. De-bureaucratization and deregulation of the industrial environment.
2. Re-structuring of the public sector.
3. Developing the agricultural and industrial infrastructure.
4. Promoting human development.

It is not a matter of chance that the last one is not an integral component of the government’s reform package, but only a sort of add-on to the policy package. The underlying view is that policies for human development or social sector development, as it is referred to in the policy making circles, are also required to translate economic growth into an equivalent increase in the human well-being. While this view is not contestable, it is clearly insufficient; it does not take into account the obvious lessons from the experience of high performing East Asian economies. The policy makers in these economies clearly regarded the causation between development and economic growth as bi-directional. And in operational terms, they consciously developed human resources to achieve higher economic growth.

Countries like Japan, Germany, and Singapore are able to increase their per capita income as well as their financial conditions in a more planned manner by investing and using their human resource in a judicious way.

Investment in human capital through education, training, medical care, etc., yields returns just like investment in physical capital. This can be seen directly in the form of higher incomes earned because of the higher productivity of the more educated or the better trained persons, as well as the higher productivity of healthier persons. Not only do the more educated and healthy people gain through higher incomes, society also gains in other indirect ways because the advantages of a more educated or a healthier population spreads and influences those also who are not educated and those who do not know about proper health care. The quality of population ultimately decides the growth rate of the country. Thus the rising level of human capital enables a place into the rich, complex, and modern economic structure.

How is the Human Development Index measured? Where does India figure on this list? Let your students look at the reports for the last few years and see if there has been any improvement in India’s ranking on the HDI.

How far will organizations like the National Skill Development Corporation help in enhancing India’s labour force? What is the role of the NSDC? What are the steps that it is taking to encourage vocational training? Students can write to the CEO of the organization and do an email interview.

After the RtE, have there been any changes in the way government schools are run? Look for a government school in your vicinity, visit the school, talk to the teachers and students and prepare a report. Are we on the right track to build a capable labour force for India?

How about the physically and mentally disabled? Do they contribute to a country’s economy? How do we ensure that they too have the opportunity to live productive lives?

The author is the Head of the Department for Social studies at Gitanjali Devashray school, Hyderabad. She can be reached at [email protected].