What is culture? Culture can mean many different things to different people. To clarify my own mind, I imagined I was trying to describe the ‘culture’ (how we are, our way of life) of my own country to a foreigner.

I realized that ‘cultural traits’ can be roughly divided into several categories:

That’s pretty wide-ranging! In the following discussion, however, when I speak about ‘culture’, I would like to focus specifically on attitudes/values and related social behaviour.

Any group of people – family, classroom, school, village, ethnic group – will eventually evolve its own kind of ‘culture’. So what kind of culture do we want to foster in our classrooms, in our schools?

Actually, to ask this question is to look at the topic through the wrong end of the telescope. The question is not: “What sort of culture do we want now?” It is rather: “What sort of society do we want in the future?” Do we want a society where a truck driver can be beaten to death by a woman police officer because he refuses to pay a Rs 4000 bribe? Where a young woman is raped because she is out after dark and therefore “asking for it?” Where a teenager commits suicide because he ‘only’ came second in the exams? Where no-one will rent a house to a person with the wrong surname? Where you can only climb the social or business ladder by trampling on those below?

If you answered “yes” to any of these questions, you need read no further.

When we stand in front of a class, we may try to be different from the teachers we had when we were in school. But such a piecemeal approach is unlikely to have much long-term impact. We need to recognize that the school as a whole needs to develop its own ‘culture’, and that every adult in the school needs to wholeheartedly buy into that culture. Only then is there any chance of changing attitudes and behaviours that the child may be imbibing from his/her home environment, and which may be ingrained even before the child comes under our care.

So the school – i.e., all those who work there – needs to be quite clear about the attitudes and behaviours it wants to see in our future society. For example, this society may need people who can co-operate; who can communicate and resolve conflict; who can take initiative and responsibility; who care about others and are proactive in seeing justice done; who really want to change things for the better; who can make choices based on what they know is right, etc.

Once that is thrashed out, one can then talk about what teachers need to do so that these attitudes and behaviours can be passed on. 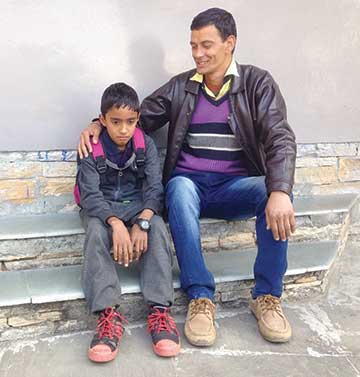 Some teachers will say: “I am here only to make sure my pupils get good marks in the exams, so they will get a good job later on. Anything else is ‘off-topic’.” In this regard, It is interesting to read the following, from the Secondary Education Commission: “The object of a democratic education is … the full, all-round development of every individual’s personality…. i.e., an education to initiate the students into the art of living in a community. …. No education is worth the name which does not inculcate the qualities necessary for living graciously, harmoniously and efficiently with one’s fellow men”. This was written in 1952. Yes, that’s a long time ago, and some will say it’s outmoded. But it’s interesting to note that 65 years ago people were talking about exactly the same topics as we are today.

I believe that one of the best ways to think about these questions is for the school to write its own ‘school culture’ document, sometimes called a ‘charter’ – a kind of constitution document. It can be as broad-ranging and as detailed as deemed appropriate, but it should be very clear about what kind of child the school wants to see when s/he leaves, and how this will be achieved.

A charter usually starts with a ‘Mission Statement’, which tries to wrap up the main thrust of the school’s culture in a short summary. Then more detail follows. For example, part of our school’s Mission Statement states:

The document then goes on to list attitudes and values that we aim to foster; also good teaching practices, and desired ways that teachers should relate to pupils.

What is important is that all teachers should have input into creating this ‘school culture’ document /charter (for the same reason that children are far more likely to follow classroom rules that they have drafted themselves.) There are several ways to do this, but the important thing is to work backwards: start in the future and end up in the present.

It is sometimes quite interesting to see how many people flounder when actually asked to state the attitudes and behaviours that they deem important for a better future society. But even more interesting is to try to match up their statements with what they actually do on a day-to-day basis. A charter is a useless waste of time and paper unless it is implemented. How to do this may require even more discussion than writing the charter itself. Everything that’s said and done in the school – and how it’s said and done, and why it’s said and done, and the long-term effects of these words and actions – may need to go under the microscope. Even seemingly innocuous actions can have a profound effect on impressionable young children.

For example, do we want future adults who passively wait to be told what to do, feel disempowered, unmotivated and lack initiative? On the other hand, if we want people who can think for themselves, see what needs to be done and go ahead and do it, maybe we need to stop speaking to children only in instructions and commands, dragging them around by the arm. Do we want a competitive society where everyone is fixated on getting to the top, elbowing others out of the way, where those who don’t achieve this have to put someone else down in order not to feel a failure? If we want a society where people support each other with sensitivity and kindness, maybe we need to rethink the value of competition in school life. Do we want future adults who conform to the mob, mindlessly obeying authority? Maybe we need to take a long hard look at military-style march-pasts to the beat of a drum.

A school’s playground can often act like the canary in the coal mine, giving a little foretaste of the society of the future that those children will help create. Is the atmosphere peaceful and harmonious? Are the children playing co-operatively, or are they pushing and shoving as they try to dominate each other? Are there sometimes tussles and fights? Do the children speak to each other in a friendly, inclusive way, or are there put-downs, cattiness, even bullying? Are they sensitive to the needs of others? Are the children basically happy and cheerful, or sullen and antagonistic? Some careful observation can reveal whether the school is on the right track, or whether some things that the adults are saying and doing need to change.

It is crucial that all adults involved in the school actively live by the attitudes and behaviours that have been decided upon. Every day. All the time. The teacher is the children’s role model – they will copy her/him. If we want a future society where people respect each other, we need to speak with kind respect (to everyone). If we want people to appreciate and value others, we need to appreciate and value everyone in our class. And every moment is a potential learning opportunity for the children, as you gently remind them of expected attitudes and behaviours.

The last step in maintaining a benign school culture is continual reinforcement of the desired attitudes and behaviours (of adults as well as students). For this, someone has to carry the initiative and motivate everyone else to support it. This will invariably be the principal.

With a school culture of positive attitudes and behaviours, I believe we have a real chance of a better tomorrow: a tomorrow where each person is valued for what they can contribute; where sensitivity, tolerance, empathy and honesty ensure that no-one need feel disempowered and resentful; where mutual support rather than competition underpins our daily lives.

“Be the change you want to see”!

The author has taught English in Austria, Ecuador and India. At present she works in a small rural school in Uttarakhand. She can be reached at gitakrenek@gmail.com.